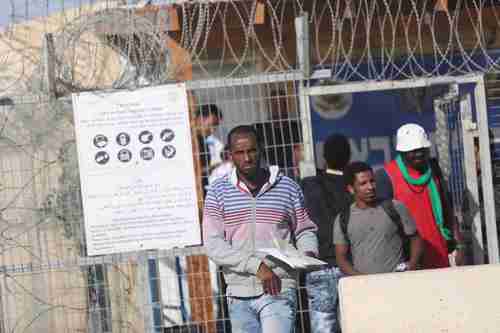 African migrants leaving prison on Sunday, after being freed by Israel’s Supreme Court (Times of Israel)

Israel’s Interior Ministry on Sunday released 207 African migrants from Saharonim prison in southern Israel, by order of Israel’s Supreme Court. The migrants were mostly from Eritrea and Sudan. According to the government, they were “infiltrators,” or “illegal immigrants.”

This month, Israel’s prime minister Benjamin Netanyahu announced a major new policy for dealing with 16,250 of the migrants. Under a deal with the UN Human Rights Council (UNHCR), 16,250 African migrants under threat of being either jailed or deported to another African country, would instead be absorbed and resettled into a Western country. The deal also specifies that another 16,250 similarly threated migrants would be permitted to remain in Israel as “temporary residents.”

Netanyahu originally said that the agreement was a “landmark achievement,” allowing 16,250 migrants to be taken to “developed countries like Canada, or Germany and Italy.” Canada announced that it would accept some migrants under the deal, but Germany and Italy announced that they were not part of the deal and had not been consulted. The deal was also opposed by many politicians in Israel because it granted legal status to 16,250 “infiltrators.” Within hours, Netanyahu was forced to suspend the deal entirely.

For months, there have been unconfirmed reports that Benjamin Netanyahu was negotiating with Rwanda and Uganda to accept Israel’s African migrants, mostly from Eritrea and Sudan, in return for some unspecified payment. Netanyahu recently confirmed that negotiations with Rwanda had been going on for two years. However, under enormous pressure from pro-migrant activists both inside and outside Israel, Rwanda was finally forced to withdraw from the agreement.

Until Friday, Uganda consistently denied that a deportation deal with Israel exists, despite reports that it was accepting migrants deported from Israel.

On Friday, Musa Ecweru, Uganda’s state minister of disaster preparedness and refugees, indicated that Uganda was ready to accept 500 migrants from Israel. According to Ecweru:

The State of Israel working with other refugees’ managing organizations has requested Uganda to allow about 500 Eritreans and Sudanese refugees to relocate to Uganda. The Government and Ministry are positively considering the request.

We already have millions of refugees in Uganda from Somalia, Ethiopia so the few from Israel won’t be a problem to Uganda as a third party country.

We are slow but very sure on the issue of refugees that we host. To my knowledge, no refugees from Israel have come in yet. The ones coming are going to the settlement.

However, on Sunday, Netanyahu’s special emissary to Uganda returned home after 11 days of negotiations with Uganda, apparently without a deal on migrants. Independent (Uganda) and Times of Israel