Left-wing activists and Marxist governments participated in May Day on Tuesday, a day many claim as an attempt to promote the rights of the ordinary worker.

Traditionally an ancient northern hemisphere spring festival, May Day was co-opted by 20th-century communists as “International Workers’ Day” to commemorate the 1886 Haymarket riots in Chicago that saw dozens of laborers killed and injured by police while demonstrating for employment rights.

Governments and trade unions today use the event as an opportunity to demand higher wages and employment benefits. Communist nations used the holiday to promote their own elite.

Thousands participated in marches across Western cities including New York, Zurich, and Berlin:

Workers and activists around the world are marking May Day with rallies to demand their governments address labor issues.

In Paris, violent confrontations broke out as “groups of black-clad protesters used the occasion to burn cars, vandalise businesses, and clash with police.” 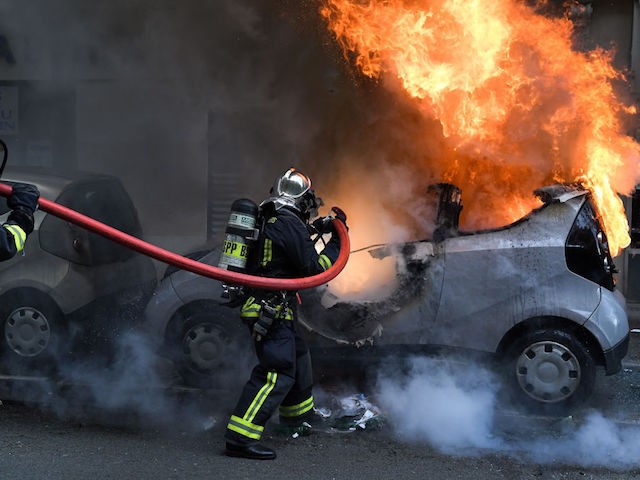 PARIS, FRANCE – MAY 01: A car is burning as thousands of people take to the streets during the May Day demonstrations on May 1, 2018 in Paris, France. (Photo by Jeff J Mitchell/Getty Images) 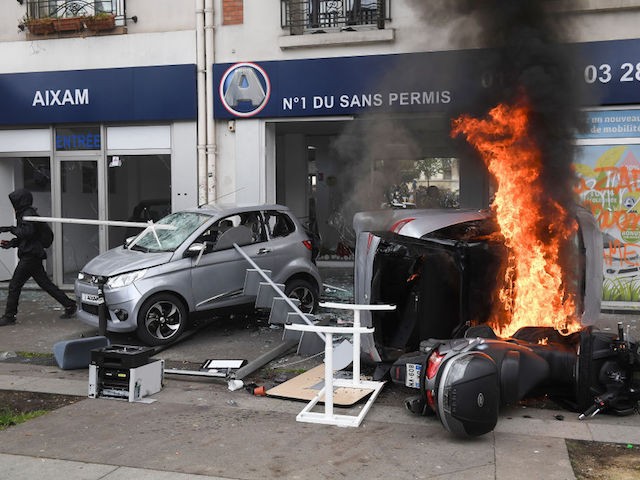 PARIS, FRANCE – MAY 01: Vehicles burn as thousands of people take to the streets during the May Day demonstrations on May 1, 2018 in Paris, France. (Photo by Jeff J Mitchell/Getty Images)

French riot police use water cannons and teargas as vandalism marks May Day with hundreds of protesters marching across Paris to oppose economic policies pursued by President Macron pic.twitter.com/fTlD2thGbC

During celebrations in London, some participants were seen holding a sign glorifying former Soviet leader Josef Stalin. One of history’s most brutal dictators, he is estimated to have killed between 20 to 25 million people.

History, who need history? Stalin remains a hero to some on today’s May Day march through London. pic.twitter.com/eAmztazq5X

In communist Cuba, state propaganda outlet Granma declared that although celebrations had come to an end, “celebration of Cuban workers continues throughout the country under the banner: Unity, Commitment, and Victory.” Their website also provided extensive coverage of the celebrations, which included minute by minute photos as events unfolded.

“This May Day the Cuban people are leading a massive, colorful, vibrant, conscious march, reaffirming to the world the unity and commitment of the island’s workers to the new government, Raúl and the Party,” one of the live blog posts reads. 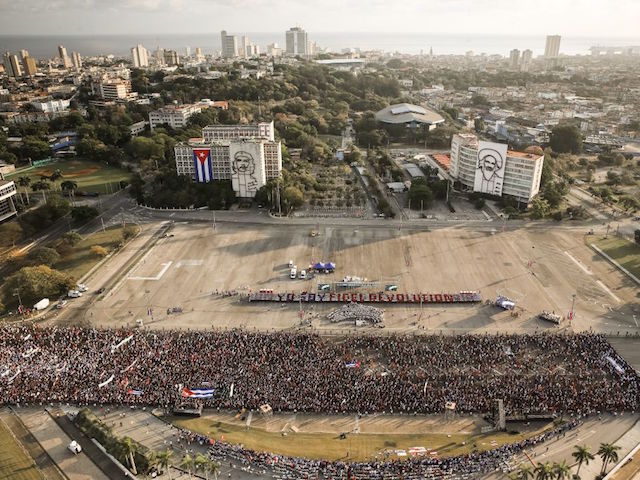 People march at Revolution Square in Havana during the celebration of May Day on May 1, 2018. (Photo by Alejandro ERNESTO / POOL / AFP)

This year’s May Day march in the capital has come to an end, but the celebration of Cuban workers continues throughout the country under the banner: Unity, Commitment and Victory!#RevolucionEsUnidad #Cuba https://t.co/HFh5vQgVX3 pic.twitter.com/dRpoHpB9Id

Cuba’s new president is now getting his own May Day signage. pic.twitter.com/snXiWwI8A5

In Santiago, Chile, the government deployed riot police and water cannons to control violent clashes as around “40,000 workers, commanded by the Central Unitaria de Trabajadores and other labor unions, demanded ‘a better labor treatment’ and changes to the labor reforms of Sebastián Piñera.” 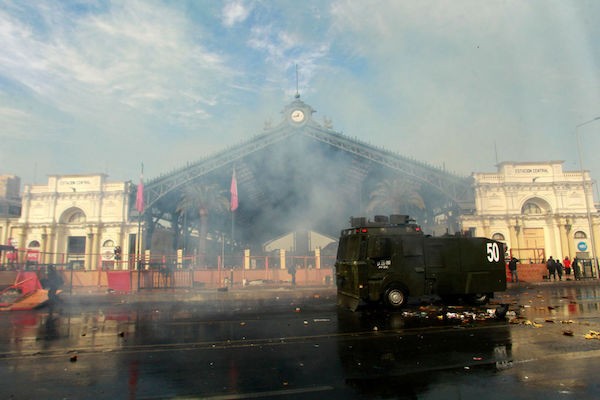 View of a riot police vehicle during clashes following a May Day march in Santiago on May 1, 2018. (Photo by CLAUDIO REYES / AFP) 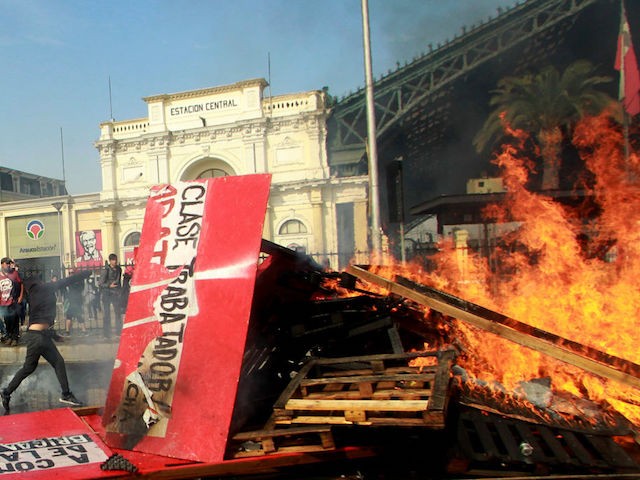 View of a fire during clashes following a May Day march in Santiago on May 1, 2018. (Photo by CLAUDIO REYES / AFP) (Photo credit should read CLAUDIO REYES/AFP/Getty Images) 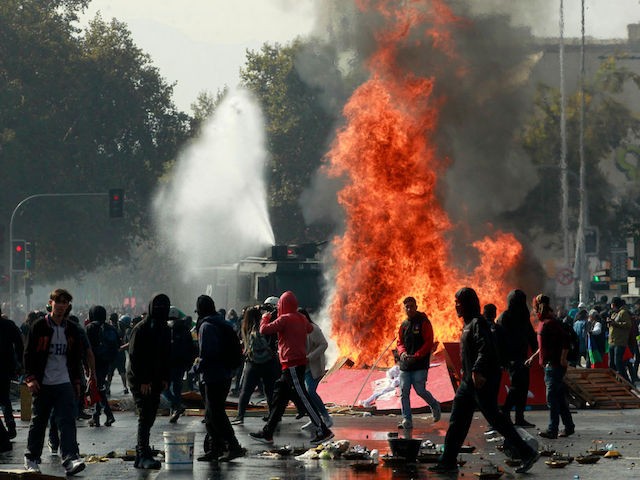 View of a fire during clashes following a May Day march in Santiago on May 1, 2018. (Photo by CLAUDIO REYES / AFP) (Photo credit should read CLAUDIO REYES/AFP/Getty Images)

Some demonstrations took place in Caracas, Venezuela, where the legacy of Hugo Chávez’s socialist revolution has left the once thriving oil-rich nation as one of the poorest places on earth:

In communist China, President Xi Jinping “extended greetings to workers nationwide” for the day, declaring that “socialism and the creation of a new era can only be achieved through hard work.” However, no major rallies were reported.

In North Korea, which typically celebrates May Day in grandiose fashion to promote its ideology as a workers paradise, celebrations remained low key amid ongoing efforts to denuclearize and improve relations the West.

State media reported that “senior party and government officials of the DPRK celebrated the May Day with working people across the country,” visiting “institutions, industrial establishments, construction sites and farms to congratulate workers, agricultural workers and intellectuals greeting the holiday.”

A video collection by TIME magazine gave a taste for celebrations in countries such as Indonesia, South Korea, the Philippines, Turkey, Austria, Iraq, Spain, and Greece, some of which turned violent:

In the U.S., Sen. Bernie Sanders (I-VT) took to Twitter to urge people to “strive for a just and moral economy”:

Every day we must strive for a just and moral economy with decent wages, decent benefits and decent working conditions for all workers. That is a struggle that must be carried on by every generation. #MayDay

Sporadic demonstrations also took place across the country in cities such as Chicago, New Orleans, and Los Angeles. Many of the demonstrations targeted the Trump administration while calling for amnesty for illegal immigrants among other additional rights.