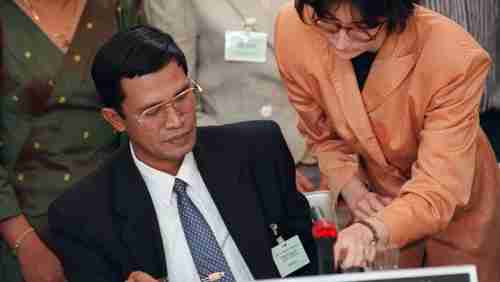 Cambodia is holding a supposedly democratic election on Sunday, but there is little doubt which party is going to win: the party is the Cambodian People’s Party (CPP), and its leader is China’s man, Hun Sen.

China has done everything possible to ensure a Hun Sen victory. As the three-week election campaign began, China announced that it would provide $259 million in loans to fund an infrastructure project in the capital city Phnom Penh. China’s ambassador Xiong Bo attended a CPP party rally to support Hun Sen.

China has provided more direct election aid as well. China provided funding for the election in the form of $20 million for equipment, including polling booths, laptops, and computers. This month, U.S. security-research firm FireEye said it found evidence of a Chinese hacking team infiltrating computer systems belonging to Cambodia’s election commission, opposition leaders, and the media.

There used to be an opposition party, the Cambodia National Rescue Party (CNRP). It came close to winning during the last election in 2013. But then in June 2017, in a local election on the outskirts of Cambodia’s Kampong Cham town, it decisively defeated Hun Sen’s CPP. CNRP leader Kem Sokha has been jailed on phony charges of treason. Hun Sen arranged for the Supreme Court to declare the CNRP to be illegal. So there is no longer a major opposition party, and party activists have been forced to flee the country.

In the past year, Hun Sen has also destroyed the free press. Hun Sen closed 30 radio states, as well as the Cambodia Daily, one of Cambodia’s two independent English-language newspapers. Radio Free Asia was banned, and many of its reporters were jailed. The Phnom Penh Post, the last remaining independent newspaper, was sold to a businessman tied to Hun Sen.

Hun Sen has repaid China by making Cambodia an important strategic ally of China. While Vietnam, Philippines, Indonesia, and other countries oppose China’s massive illegal annexation and militarization of the South China Sea, Cambodia strongly supports China, especially in international forums like ASEAN. China returns the favor by fully supporting Hun Sen’s human rights atrocities: jailing opposition politicians, shutting independent newspapers, and so forth. There is honor among criminals. Reuters and Bloomberg and Asia Times and The Atlantic

From the point of view of Generational Dynamics, Hun Sen is following exactly the same pattern that many other countries have followed after a tribal or ethnic civil war. After the war ends, the leader of the country, usually from the winning tribe or ethnic group, refuses to give up power, and becomes increasingly violent and authoritarian, using as an excuse that peaceful protests or negative news articles can turn into a new civil war. This excuse provides justification for mass slaughter, rape, torture, mass jailings, mutilations, and so forth. I have described this behavior in Bashar al-Assad in Syria, who has gone to the extent of using Sarin gas and barrel bombs packed with explosives and metal and laced with chlorine gas onto civilian neighborhoods and markets in order to kill as many women and children as possible. Other leaders that I have described exhibiting this type of behavior include Paul Biya in Cameroon, Pierre Nkurunziza in Burundi, Paul Kagame in Rwanda, Yoweri Museveni in Uganda, Robert Mugabe in Zimbabwe, and Joseph Kabila in DRC.

Cambodian culture dates back to at least 5000 BC. During the period 500 BC to 500 AD, the Khmer people in Cambodia were strongly influenced by Indian culture, via India traders, bureaucrats, and priests. When Khmer became a written language in about 300 AD, Indian characters were adapted for its alphabet. Cambodia adopted some Indian gods, but not the caste system of Hinduism. In the 1200s, there was a mass conversion of Cambodians to Theravada Buddhism, a religion that was also adopted by the neighboring Thais. There were several centuries of wars between the Khmer and the Thais until the French arrived in the 1860s.

Cambodia became a French protectorate in 1863. Cambodia gained independence from France in 1953 and supported the North Vietnamese against the South Vietnamese and the Americans in America’s Vietnam war. It is easy to underestimate the horror of what happened next, since in the vitriolic political atmosphere following the Vietnam war, leftists like Jane Fonda vocally denied it was even going on, saying “I will never criticize a Communist government.”

And yet, the Buddhist society of the China-backed Khmer Rouge in Cambodia in 1975-79, led by Pol Pot, perpetrated one of the three or four top mass genocides of the 20th century, comparable to the huge genocides of Adolf Hitler, Josef Stalin, and Mao Zedong.

The Buddhist Cambodian “Killing Fields” genocide, 1975-79, killed something like 1.7 to well over 2 million people, out of a population of 8 million. So around 20 percent of Cambodia’s population were killed, making it possibly the worst genocide, on a percentage basis, of the 20th century. By contrast, the Nazi Holocaust killed around 5 million, which was less than 3 percent of Germany’s population. Pol Pot was trying to imitate Mao Zedong’s Great Leap Forward in China, which was a genocide that killed millions of people out of some two billion. Mao Zedong and Pol Pot may be comparable in their genocides. In all cases, these millions of people were the subject of almost unimaginable atrocities, including torture and rape.

In 1991, prime minister Hun Sen signed a peace agreement called the Paris Peace Accords, a document that guaranteed democracy and human rights in Cambodia. However, like other leaders we have described following an ethnic or tribal civil war, Hun Sen has become increasingly authoritative and dictatorial, using as an excuse that unlimited violence is justified to avoid returning to the violence of the civil war.

In October of last year, as Hun Sen was brutally cracking down in preparation for these new elections, he said the following in a speech:

He told people to stop “dreaming” and harking back to the ideals of the agreement, because the Khmer Rouge were gone now, and so the agreement was useless “unless the Khmer Rouge returns.” BBC (14-Sep-2014) and Diplomat (4-Nov-2016) and Phnom Penh Post (12-Dec-2017) and Cambodia Tribunal Monitor