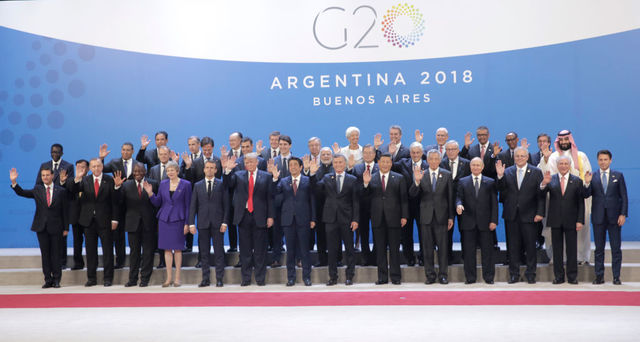 The G-20 is a group of member nations that represent two-thirds of the world’s people and 85 percent of its economy. The G7 member countries are the United States, Britain, France, Japan, Germany, Italy, and Canada. Russia was a member (of the G-8), but when expelled in 2013 when it invaded Crimea. The G-20 was formed in 1997 by adding developing nations such as Brazil, China, India, and Russia.

The G-20’s primary mandate is to prevent future international financial crises. It seeks to shape the global economic agenda, by combining the perspectives of the major economies with the growing economies in Latin America and Asia. The finance ministers and central bank governors of the G-20 countries meet twice a year. They meet at the same time as the International Monetary Fund (IMF) and the World Bank.

G-20 Web Site and The Balance

The G-20 Final Communiqué – the ‘breakthrough’ 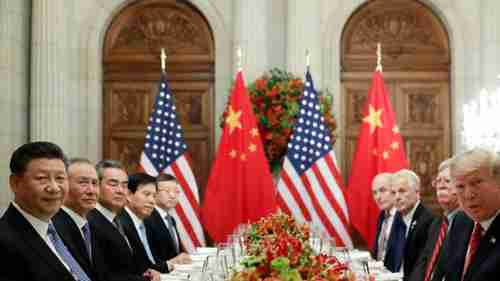 Last year’s G-20 meeting did not have a final joint communiqué from all the members because Donald Trump as advocating a protectionist trade policy and also because he had just pulled out of the Paris treaty on climate change. Trump opposed the views of the other 19 countries, so no communiqué could be drafted that they all agreed on.

So this year, they were bound and determined to get out a joint communiqué that everyone would sign onto. Apparently, they negotiated all night Friday night, sometimes spending an hour on the wording of one sentence. But they finally had “a breakthrough.”

Previous G-20 communiqués had contained text discouraging protectionism, but any such text this year would be clearly aimed at Trump, so would not be agreed. So they agreed to this language:

27. International trade and investment are important engines of growth, productivity, innovation, job creation and development. We recognize the contribution that the multilateral trading system has made to that end. The system is currently falling short of its objectives and there is room for improvement. We therefore support the necessary reform of the WTO [World Trade Organization] to improve its functioning. We will review progress at our next Summit.

So the breakthrough was that the communiqué specified that the WTO had to be reformed, but did not specify what the reform would be.

That is because different groups wanted different, contradictory reforms. Trump particularly wanted a reform that changed China’s status from a “developing nation” to a “developed nation,” so that it would be bound by the WTO rules, but China, of course, disagreed with that. China wanted a “win-win” situation where the WTO continues exactly as it has.

When the U.S. helped China join the WTO in 2000, it was with the expectation that China would become an honest member of the international trading community. But the United States position during the last three administrations is that China has repeated cheated and lied and not followed the WTO rules. Even when the WTO rules against China, China just ignores the ruling (as it has ignored the Hague Tribunal ruling that China’s activities in the South China Sea are illegal) and continues to lie and cheat. So the Trump administration would not agree to continue trade rules as they have been.

So the wording of the communiqué, as shown above, will not make any difference in trade, but it did allow the communiqué to be adopted.

The other major problem area is the Paris climate change treaty. All the other 19 countries supported the treaty and wanted to say so in the communiqué, so they compromised on this text:

20. Signatories to the Paris Agreement, who have also joined the Hamburg Action Plan, reaffirm that the Paris Agreement is irreversible and commit to its full implementation, reflecting common but differentiated responsibilities and respective capabilities, in light of different national circumstances. We will continue to tackle climate change, while promoting sustainable development and economic growth.

21. The United States reiterates its decision to withdraw from the Paris Agreement, and affirms its strong commitment to economic growth and energy access and security, utilizing all energy sources and technologies, while protecting the environment.

So that solved the Paris agreement problem.

Other issues were resolved in similar ways. Vladimir Putin vetoed any reference to the seizure near the Kerch Strait, and any mention of the murder of Jamal Khashoggi was omitted. G-20 Final Communiqué (PDF) and Bloomberg and AP

Investors around the world are breathing a sigh of relief today as Donald Trump and Xi Jinping agreed to a 90-day moratorium on further tariffs in the so-called “trade war.” The U.S. has already imposed 10 percent tariffs on $200 billion of Chinese goods and threatened to raise that rate to 25 percent on January 1. That change will be delayed for 90 days.

In exchange, the U.S. will get the following:

The trade conflict, which has rattled financial markets and upended global supply chains, began this year when Trump imposed tariffs on a total of $253 billion of imported Chinese steel, industrial products and consumer goods, including handbags, furniture, and appliances. Chinese officials, caught off guard by the aggressive U.S. moves, retaliated with import taxes on such American products as soybeans, automobiles and liquefied natural gas. Washington Post and Russia Today and Reuters