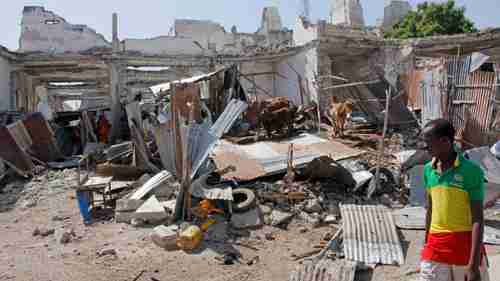 A massive car bomb detonated at a military checkpoint near Somalia’s presidential palace in the capital city Mogadishu on Saturday, followed by a smaller explosion nearby. At least 16 people were killed and dozens injured. The bombings appeared to target people heading to work.

Al-Shabaab, an al-Qaeda linked terror group, took responsibility for the attacks. One of those killed was prominent journalist Awil Dahir Salad.

The attack comes a week after six airstrikes from U.S. warplanes killed 62 al-Shabaab militants, according to the U.S. military.

The U.S. has a huge military base in neighboring Djibouti, from which the U.S. has launched 40 air strikes so far this year, compared to 35 in 2017. It is estimated that at least 400 people have been killed in air strikes since the beginning of 2017, far more than the previous ten years combined.

U.S. airstrikes have forced al-Shabaab to change its tactics. Instead of targeting Somali government with mass attacks and assassinations, which expose its fighters to airstrikes, they’ve instead increase urban guerrilla warfare of terrorist bombings.

Al-Shabaab (AS) is an indigenous jihadist terror group which has pledged allegiance to al-Qaeda. There is a separate jihadist group in Puntland (northern Somalia) affiliated with ISIS called “IS Somalia” or ISS (Abnaa ul-Calipha). However, ISS has had nowhere near the success in blowing people up that AS has had.

Both groups have been increasingly demanding that businesses pay them taxes, in exchange for “protection” from bombings and terror attacks. Thus, both AS and ISS are increasingly acting more and more like Mafia criminals, rather than pious jihadists. AP and Reuters and BBC and Hiraal Institute

In 1988, a full-scale generational crisis civil war began in Somalia which, combined with a growing famine, was killing tens of thousands of people. In the final days of his presidency, George H.W. Bush committed ordered more than 20,000 troops into Somalia to calm the situation and to “save thousands of innocents from death.”

As always happens in a generational crisis war, the situation deteriorated and in October 1993, elite American troops launched a disastrous raid in the Somali capital Mogadishu. Two American Black Hawk helicopters were shot down using rocket-propelled grenades. Some of the survivors were rescued, but two pilots were attacked by a mob of thousands of Somalis who hacked them to death with machetes and dragged their mutilated bodies through the streets as trophies. The result was a 15-hour battle that killed hundreds of Somalis, as well as about 18 Americans and two U.N. soldiers.

The “Black Hawk Down” incident, which was later made into a movie, was the climax of the Battle of Mogadishu and also the climax of Somalia’s civil war. Black Hawk Down shocked the American public and caused the U.S. under Bill Clinton to withdraw its forces from Somalia in 1994 and to be reluctant to intervene in African crises since then. So, for example, the U.S. stayed out of the massive Rwanda massacre in 1994, which is probably just as well.

The American military’s hasty retreat was viewed by many as a sign of weakness – that the United States could not tolerate military casualties. In 1996, Osama bin Laden taunted the Clinton administration about its withdrawal: “You left carrying disappointment, humiliation, defeat and your dead with you.”

After the terror attack on 9/11/2001, US Special Forces began gradually returning to Africa. By 2016, 17 percent of all Special Forces deployed overseas were in Africa.

About 40 American soldiers were sent to Somalia in March 2017, the largest deployment of American troops to the Horn of Africa since Black Hawk Down in 1993. Their job was not combat but was, rather, to train the Somalis to fight al-Shabaab on their own, supported by American airstrikes.

Today, 17 years after 9/11, it seems clear that the “war on terror” is not being won, and this is causing the Trump administration to reevaluate its military policies. This has resulted in announcements of troop withdrawals from Syria and Afghanistan and may lead to other announcements. Washington Post and AP