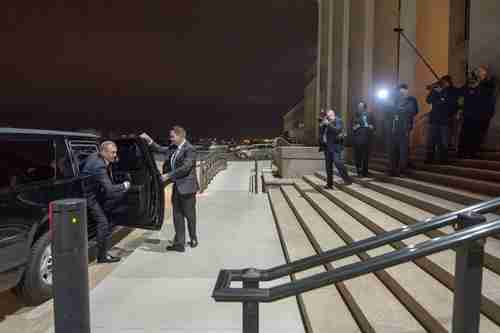 Patrick Shanahan arrives at the Pentagon on Jan. 2 for his first day as acting Secretary of Defense. (DoD)

On his first day on the job, last week on January 2, the new Acting Defence Secretary Patrick Shanahan, appointed in the wake of James Mattis’ resignation, told his first meeting with secretaries of the U.S. military branches that the department’s focus should always be on “China, China, China.”

Word of Shanahan’s statement was interpreted by the Chinese to mean that they should expect further military “provocations” by the Americans, such as Freedom of Navigation Operations (FONOPs) by American warships in the South China Sea or Taiwan Strait, or that American was going to take steps to “prevent China narrowing the China-U.S. military gap.”

The American military is focusing a lot more on what used to be called the “Asia-Pacific” region and is now called the “Indo-Pacific region,” which one Indian analyst colorfully described as stretching from Hollywood to Bollywood.

This announcement was ridiculed by the Chinese, who attended the same meeting, because China’s Belt and Road Initiative (BRI), has committed $900 billion (with a “b”) to Asian countries, in contrast to America’s “paltry” commitment of $133 million (with an “m”). Reuters and Global Times (Beijing) and Breaking Defense

In December, Congress passed the Asia Reassurance Initiative Act (ARIA), which President Trump signed on December 31. It called for America’s increased engagement in the Indo-Pacific region and strengthened support, including arms sales, for U.S. allies in the region.

ARIA is a good example of the U.S. Congress exercising oversight over the Executive through authorizing expenditure for specific activities, requiring annual reports on a number of security issues and mandating specific strategies to achieve U.S. objectives.

ARIA authorizes $1.5 billion annually for 5 years to enhance U.S. presence in the Indo-Pacific. This is ten times greater than the $133 million announced in August at the ASEAN meeting, but it is still much less than the $900 billion that China’s Belt and Road Initiative (BRI), has committed to Asian countries.

ARIA recognizes the vital importance to the security of the United States of treaty allies (Japan, South Korea, Australia, the Philippines, and Thailand), strategic partners (India), enhanced security partnerships (Indonesia, Malaysia, Singapore, and Vietnam), and commitment to Taiwan. With respect to Taiwan, the Bill significantly calls for the transfer of “defense articles” and high-level official visits.

In particular, ARIA says the following specifically about China:

All military units must correctly understand major national security and development trends, and strengthen their sense of unexpected hardship, crisis and battle.

[China’s armed forces must] prepare for a comprehensive military struggle from a new starting point…. Preparation for war and combat must be deepened to ensure an efficient response in times of emergency.

China’s foreign ministry spokesman gave a specific answer to the portion of the new ARIA law having to do with Taiwan:

The above-mentioned Act seriously violates the one-China principle and the provisions of the three China-US joint communiques, and grossly interferes in China’s internal affairs. The Chinese side expresses strong dissatisfaction with and resolute opposition to the US insisting on signing the Act into law and has already made stern representations with the US.

I would like to remind the US side of the speech made by President Xi Jinping at the 40th anniversary of issuing Message to Compatriots in Taiwan. He stressed solemnly that the Taiwan question belongs to China’s internal affairs, concerns China’s core interests and the national bond of the Chinese people and allows no interference from the outside.

We urge the US side to abide by the one-China principle and the provisions of the three China-US joint communiques. The US must not implement the relevant contents of the Act and should carefully handle the Taiwan-related issues in a cautious manner so as not to impair the overall situation of the China-US relations and cross-Straits peace and stability.”

Just as the United States laws and rhetoric are becoming increasingly belligerent, China’s are doing the same.

Today, in 2019, many nations of the world are deep into a generational Crisis era. As I have been writing for years about country after country, many countries of the world are becoming increasingly nationalist and xenophobic, as the survivors of World War II have almost completely disappeared. This is true today in North America, Europe, and Asia. And this is not an abstract concept. It has real consequences in that the survivors of World War II were willing to compromise, but the generations growing up after World War II are not. So most countries today have become more willing to escalate small crises into larger ones, and less willing to accept compromises to prevent war. Even a simple misunderstanding today could trigger a military response, resulting in a tit-for-tat escalation leading to war. South China Morning Post (Hong Kong) and China’s Foreign Ministry