WASHINGTON, DC — People gathered on the West Lawn of the U.S. Capitol on Tuesday to mark the 30th anniversary of the student protests at Tiananmen Square on June 4, 1989, which turned into a deadly massacre at the hands of the Chinese Communist government.

Almost every speaker proclaimed that, over the three decades since the mass murder of its own citizens, human rights in China are even worse today than they were on that bloody spring day.

There is no concrete death toll for the killings in Tiananmen Square. Estimates range from hundreds up to 10,000.

Survivors, lawmakers, and activists took to the stage to share the battle they are still waging to hold China and the head of its Communist Party, Xi Jinping, accountable for their denial of the Tiananmen Square massacre, not to mention the ongoing human rights abuses in the country, especially against people of faith.

“Under Xi Jinping, we’ve seen a marked deterioration in the human rights situation,” Smith said. “On the religious front, whether it be the Falun Gong, Tibetan Buddhists, the Uyghurs in Xinjiang, or the Christians — even the officially recognized [Chinese Patriotic Catholic Association] — all are under a new and more aggressive siege under Xi Jinping.”

“He has declared war on religion and world leaders, including in this Capitol, and we need to speak out boldly and unambiguously against this attack against people of faith,” Smith said.

“The crimes against women of forced abortion, forced sterilization is unprecedented,” Smith said, likening it to the condemnation of forced abortions under Hitler as a crime against humanity during the Nuremberg War Crimes Tribunal.

“It is going on today in the PRC [People’s Republic of China], and Xi Jinping oversees all of that,” Smith said.

In a rare display of bipartisanship, House Speaker Nancy Pelosi (D-CA) spoke about the somber anniversary and referred to Smith’s remarks about the tanks that mowed down protesters.

Pelosi then joined Jianli Wang of the Citizen Power Initiatives for China, to unveil a sculpture by Thomas Marsh entitled “Tank Man,” a golden figure of a young Chinese protester with a hopeful expression. 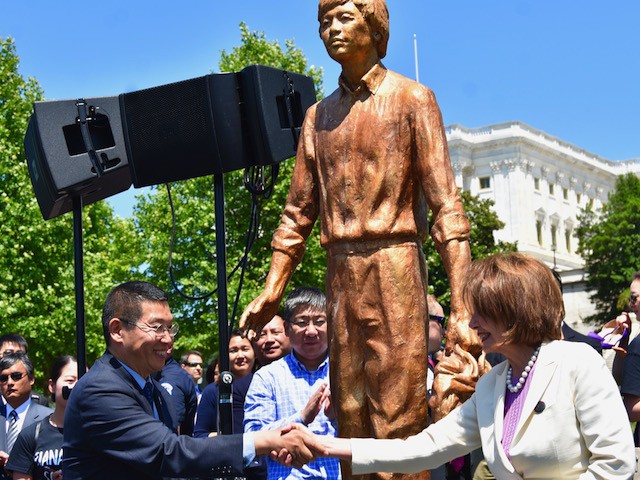 Marion Smith, executive director of Victims of Communism, summed up the essence of the rally in his prepared remarks:

Thirty years ago, China’s so-called ‘People’s Liberation Army’ murdered thousands of its fellow citizens who dared to protest for democracy and against corruption in Tiananmen Square. An opportunity to reform China’s communist system in favor of the Chinese peoples’ rights was extinguished. On June 4, we gather to remember the sacrifices of those brave Chinese students and workers from 1989 and others around the world who have tried to keep their memory alive. It is our duty to make sure they did not die in vain.

We have inherited their struggle, even as Xi Jinping has inherited leadership of the Guilty Party. Today, as many as two million Uighurs languish in Chinese prison camps just for having practiced their faith. At home, more and more Americans are beginning to see the People’s Republic of China for what it is–an unreformed communist dictatorship that tramples on human rights inside of China and threatens international peace abroad.

To sit by in the face of such travesties is to betray the memory of Tiananmen’s victims and our own national interest as Americans. Instead, we must continue their fight, serving as their voice and applying maximum pressure to Beijing to reform.

Another speaker at the rally, Reggie Littlejohn, who founded and heads Women’s Rights Without Frontiers, said it is so much worse in China now that the Tiananmen Square protest could not even take place.

“Today, Tiananmen Square could never have happened because China has no freedom of assembly,” Littlejohn said. “People cannot gather on the square. If just two people were to gather on the square and hold up a sign, they will be detained immediately.”

“It would be impossible to gather so many people from so many parts of the country onto the square because China has become a surveillance state,” Littlejohn said. “They use technology as tools of repression: millions of surveillance cameras for facial recognition and millions more of Internet thought police to spy on their citizens.”

“They issue social credit scores, and if your score is low enough, you cannot travel,” Littlejohn said. “They force people to study ‘Xi Jinping Thought,’ which indoctrination permeates schools, billboards, and smartphones.”

Littlejohn also shared some revelations from the Congressional-Executive Commission on China report on human rights in China:

A highlight at the rally was the presentation of the Truman-Reagan Medal of Freedom, which Mi Ling of Human Rights in China accepted on behalf of the Tiananmen Mothers. 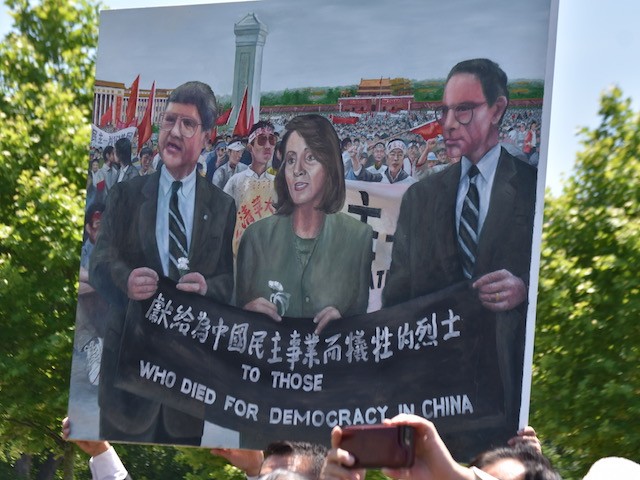 A painting displayed at the Tiananmen Square Massacre anniversary rally showed House Speaker Nancy Pelosi when she and other members of Congress visited China in the early 1990s and unfurled a banner to honor the victims. (Penny Starr/Breitbart News)

These mothers, who lost sons and daughters in the massacre, are still fighting for freedom in China. Posters of the mothers holding up photographs of their lost loved ones were on display at the event.

Despite the tragedy milestone, hope also permeated the rally, with representatives from groups such as Amnesty International USA, Campaign for Uyghurs, ChinaAid, Freedom House, Human Rights Watch, The Chen Guangcheng Foundation, the Church of Almighty God, Tibet Action Institute, and many more vowing to never forget those lost 30 years ago and to continue the fight for democracy and freedom in China.