One of many protest marches conducted during a chaotic weekend in Hong Kong was a group of Christians singing hymns and gently, but firmly, calling for democracy.

A lawmaker marching with the group accused the Chinese government of using trumped-up arrests to intimidate the protest movement.

The Associated Press on Saturday described the “Prayer Walk for Sinners” as an older and more serene group than the youthful protesters filling the streets of Hong Kong and clashing with the police:

About 1,000 people marched to a Methodist church and police headquarters. They alternated between singing hymns and chanting the slogans of the pro-democracy movement. An online flyer for the demonstration called it a “prayer for sinners” and featured images of a Christian cross and embattled Hong Kong leader Carrie Lam, who had proposed the extradition bill.

The participants in the religious march Saturday were peaceful and mostly older than the younger protesters who have led this summer’s movement and, in some cases, blocked streets and battled police with bricks, sticks and gasoline bombs.

Religious meetings do not require police approval, though authorities said late Friday that organizers of a procession with more than 30 people must notify police. The government shut down streets and subway service near the Chinese government’s office, about 3 miles west of the religious march.

The UK Daily Mail spotted one marcher dressed as Moses and carrying a tablet with “Five Commandments,” a play on the Ten Commandments that listed the five core demands of the protest movement. Another wore a red hat modeled after the famed symbol of support for U.S. President Donald Trump bearing the message “Make Hong Kong Great Again.” The red-hatted fellow was carrying a placard with the plea, “God Free Hong Kong from Nazi China.” 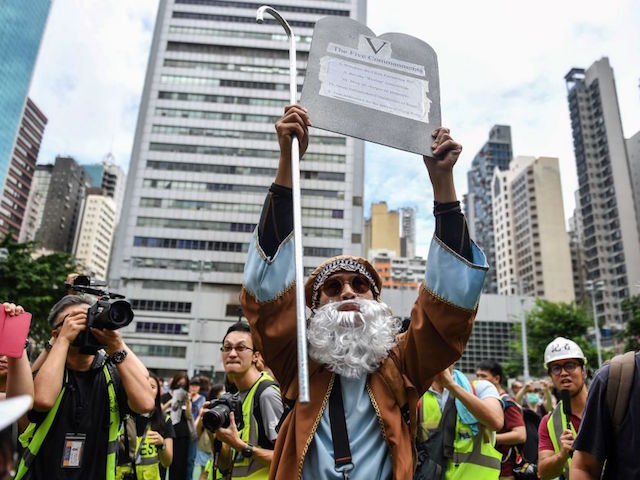 A man dressed as ‘Moses’ shows a placard with the ‘Five Commandments’ referring to anti-government protesters’ demands during a protest at Southorn Playground in Hong Kong on August 31, 2019. (LILLIAN SUWANRUMPHA/AFP/Getty Images) 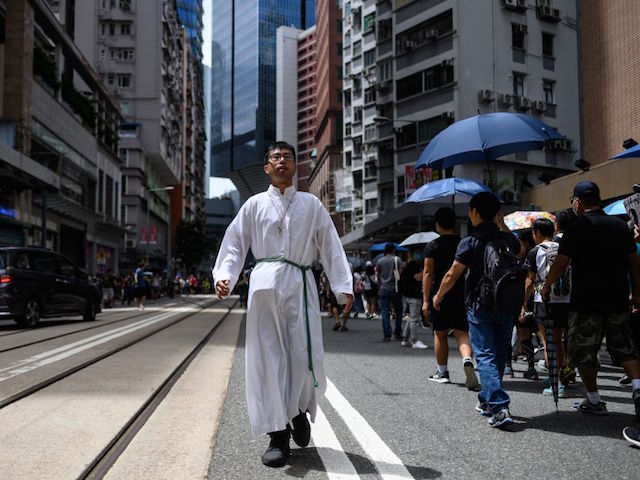 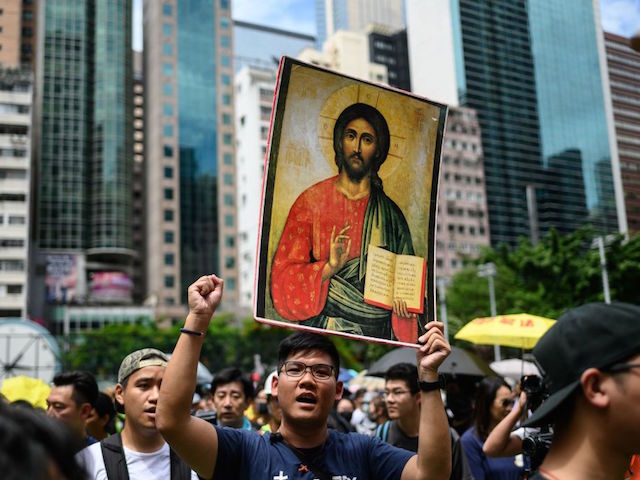 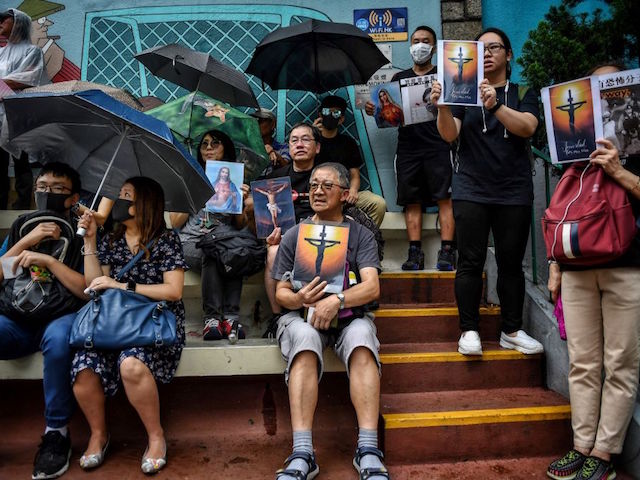 People sing ‘Sing Hallelujah to the Lord’ during a protest at Southorn Playground in Hong Kong on August 31, 2019. (LILLIAN SUWANRUMPHA/AFP/Getty Images)

Squads of police officers tried to block the “pray for sinners” march with “yellow flag warnings,” which consist of yellow signs warning demonstrators their activity has been deemed illegal and they could be prosecuted if they refuse to clear the streets. The protesters refused to disperse and the police backed down. Another yellow flag was raised when the prayer walk reached police headquarters, but the marchers ignored it, sang hymns for about 15 minutes, and continued their march.

Christians have been influential in the Hong Kong protest movement since its early days, and have been a strong force in human rights activism since China took control of the city in 1997. Christian groups have been outspoken critics of excessive police force employed against protesters, and have also prayed for understanding and forgiveness for the police.

The extradition bill that kicked off the protests was alarming to Hong Kong Christians because they feared it would give China a means of persecuting them and cracking down on religious freedom in Hong Kong, where it has enjoyed far greater protection than on the mainland.

Non-Christian protesters have embraced many of the ideals championed by churchgoing protesters, most notably by adopting the hymn “Sing Hallelujah to the Lord” as the unofficial anthem of the resistance.