Each September brings the Muslim holiday of Ashura, commemorated for different reasons and observed in very different ways by Sunnis and Shiites.

Some Shiites follow a gruesome practice of self-mutilation that involves cutting their heads, and the heads of their children, releasing a copious amount of blood.

In Sunni Islam, Ashura marks the day when Moses – who is regarded as a prophet in Islam – parted the Red Sea so his people could escape from Egypt. Sunnis believe Mohammed personally honored Ashura by fasting and often do so themselves. Other traditions have arisen in different countries where Sunni Islam is practiced. Some believe fasting on Ashura is inappropriate because fasting has become associated with the principal Muslim holiday of Ramadan.

For Shiites, Ashura is a far grimmer holiday, because it commemorates the death of Mohammed’s grandson Husayn ibn Ali at the Battle of Karbala in 680. Under Shiite theology, this was among the worst things that ever happened, because Husayn was a sacred prophet revered almost as much as his grandfather, and he was killed in a despicable ambush on the orders of an usurper. The enduring schism between Sunnis and Shiites flows from Husayn’s murder and what Shiites regard as the heresy of seizing power from the blood relatives of Mohammed.

Shiites spend the first ten days of the first Islamic month lamenting Husayn’s death in a variety of ways. Some of the traditional lamentations involve re-enacting the murder, much as Christian passion plays re-enact the death of Christ. Some of the Ashura plays, known as ta’ziyyah, are symbolic in nature or involve a bit of light flagellation, while others are hardcore recreations of how Husayn was martyred with a sword blow to the head. (Not the neck – the story goes that Ali was slashed in the skull with a poisoned blade while he was praying).

The most controversial practitioners of the ta’ziyyah tradition, therefore, slash their heads with swords, knives, or razors in a cleansing ritual called tatbir. Some of them do it to their children as well, as the UK Sun documented in a gruesome pictorial on Tuesday: 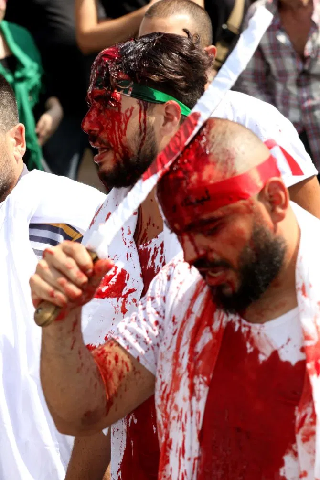 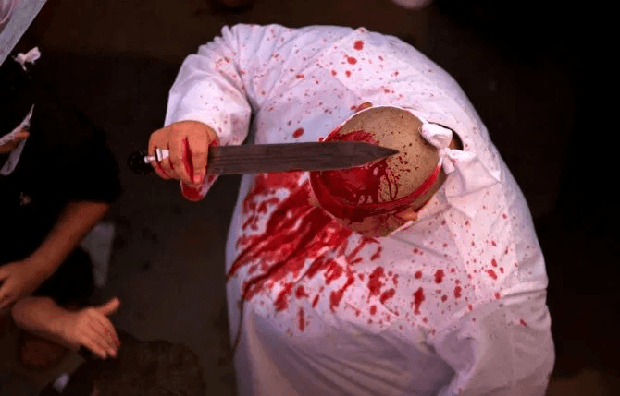 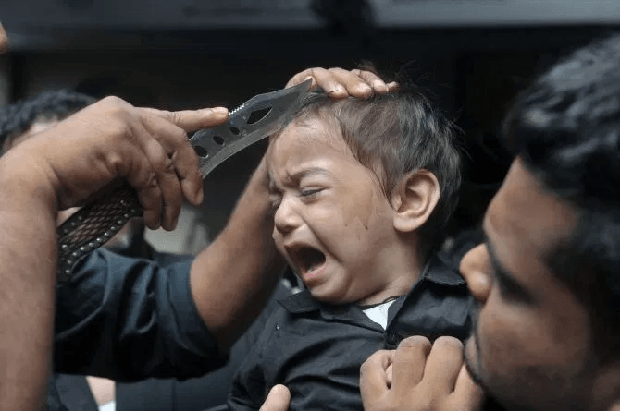 The Sun noted that in addition to the obvious physical and psychological trauma of the bloodletting, some Muslims consider tatbir cutting to be a violation of the religious prohibition against harming oneself, and some simply regard the entire spectacle as horrifying. A more constructive version of the tradition encourages Muslims to honor Ashura by donating blood.

Ashura commemorations also have an unfortunate history of becoming overcrowded and triggering stampedes at the Imam Husayn shrine in Karbala, which is now located in Iraq. At least 31 people were killed and over a hundred injured during such an incident on Tuesday, filling social media with images of bloody corpses and injured people strewn across a walkway.

Ashura observances at the Karbala shrine tend to become dangerous affairs in part because ritual bloodletting and flagellation are practiced by many, and because a sort of controlled stampede known as the “Tuwairij run” is part of the ceremony, re-enacting the desperate and doomed rush of Husayn’s relatives to come to his aid. The procession has occasionally been targeted for terrorist attacks during outbreaks of sectarian violence.