At least Russian five patients on ventilators in an intensive care unit (ICU) because of the Chinese coronavirus died in a fire at a hospital in St. Petersburg on Tuesday.

The blaze, which began on the sixth floor of St. George’s Hospital as a result of short-circuit malfunction on one of the ventilators, killed five people on ventilators and led to the evacuation of around 150 people. It is unclear how many people were injured.

“The ventilators are working to their limits. Preliminary indications are that it was overloaded and caught fire, and that was the cause,” a source at the city’s emergency department told the Interfax news agency, according to the BBC.

The fire was eventually neutralized and most of the hospital remained unaffected, the head doctor, Valery Strizheletsky, told a local television station. “Everything is more or less calm now,” he said. “We didn’t have to evacuate anyone to other hospitals.”

The fire is said to have broken out in a specific ward where four of the casualties took place. A fifth patient died in a neighboring ward.

“Investigators are working to establish the cause of death of the fifth patient,” the country’s prosecutors’ office said in a statement.

The country’s investigative committee announced a criminal probe on charges of death by negligence, as well an official probe into fire safety standards at the facility. Medical authorities have also suspended the use of some models of ventilators while the issue is being investigated.

The fire came just a few days after a separate incident took place at a Moscow hospital, in which one person was also killed. Similarly, there were reports that a faulty ventilator was also the cause of the fire.

It is not currently clear where the faulty ventilators came from. Some reports indicate that they were manufactured in Russia, yet President Vladimir Putin has admitted to shortages of medical resources, and the country has both sent and received equipment from China and other parts of the world. Since the beginning of the outbreak, Beijing has exported medical equipment around the world in an act of supposed solidarity, although much of it has been found to be faulty or not functioning whatsoever.

There are significant concerns with Russian model ventilators in the rest of the world, as well. According to Bloomberg, Aventa-M ventilators were sent from Russia to the United States at the peak of its spread, although hospitals decided against using them because of issues with the voltage. 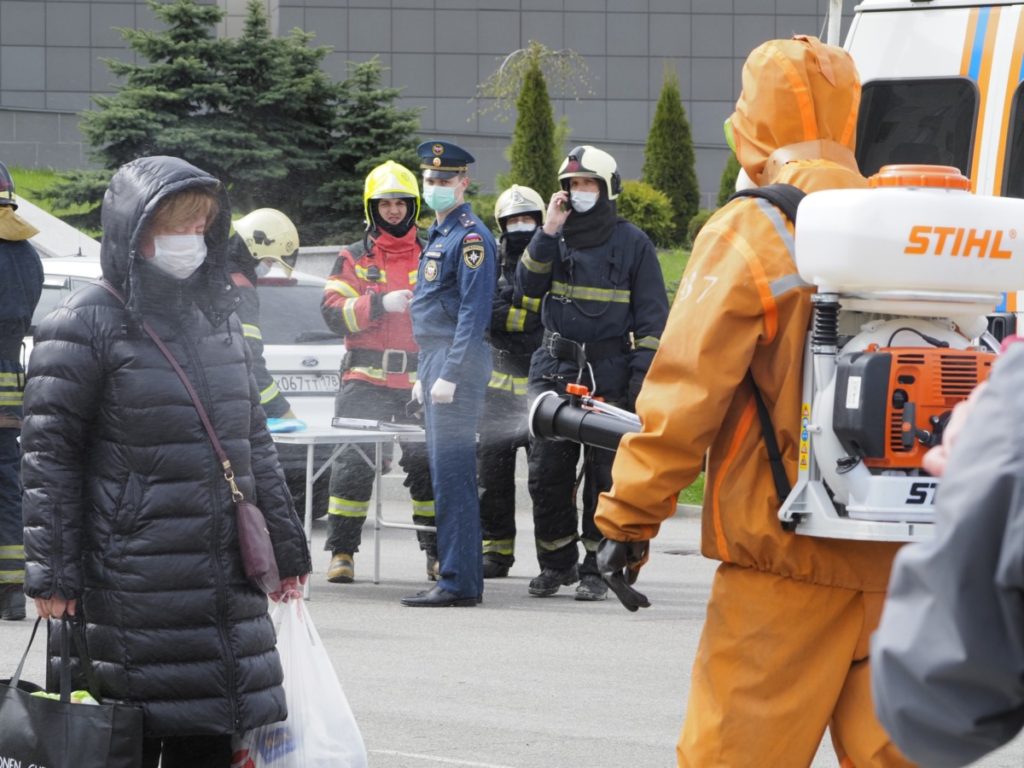 A Russian Emergency Situation worker disinfects a woman near the scene of a fire at St. George Hospital in St. Petersburg, Russia. The blaze killed five coronavirus patients. Russian emergency officials said all five had been put on ventilators. Emergency officials told the Tass new agency the fire broke out in an intensive care unit and was put out within half an hour. (AP Photo/Dmitry Lovetsky)

The tragedy underlines the immense failures by the Russian government in their response to the coronavirus pandemic, with many doctors complaining of a lack of personal protective equipment as well as a shortage of ventilators. Last week, the United States revealed plans to donate ventilators to support the country’s efforts.

As of Tuesday, Russia has confirmed around 233,000 cases of the virus, the third-highest number of anywhere in the world, but just 2,116 deaths, a mysteriously low number compared to similar countries. Last week, Moscow Mayor Sergei Sobyanin warned that the official figures were almost certainly incorrect and could be three times as high as reported. He added that a citywide lockdown would be extended till at least 31st May.