A police-triggered stampede killed 13 people and injured three others at a nightclub throwing an “illegal party” in Lima, Peru, on Saturday evening.

According to the general of the Peruvian National Police, Orlando Velasco Mujica, police received a call warning them that an illegal party was taking place at the Thomas Restobar in Lima’s Los Olivos district. Lima is currently under a strict lockdown to prevent the spread of the Chinese coronavirus, banning public gatherings.

When police arrived to storm the venue, some 120 partygoers attempted to flee, causing a deadly stampede where 12 women and one man were crushed and ultimately suffocated.

La Republica reported that police arrested 23 people at the scene, including a 16-year-old who sneaked out of his home. All detainees were subject to a coronavirus test, for which 15 tested positive. Of these, 13 were sent to mandatory isolation, while the others were considered no longer contagious.

Also subject to testing were the 38 police agents involved in the raid, all of whom authorities have also placed in quarantine, and the dead, of which 11 reportedly tested positive for coronavirus.

DEADLY STAMPEDE: At least 13 people were killed at a nightclub outside of Lima, Peru, after a stampede broke out when police raided the club over violating coronavirus restrictions. @TomLlamasABC reports. pic.twitter.com/36zdNldeFx

In a statement, the country’s Interior Ministry tried to deflect blame onto the “unscrupulous business owner” running the event in defiance of restrictions imposed by the Chinese coronavirus.

“The Ministry of the Interior profoundly regrets the deaths of 13 people as a consequence of the criminal irresponsibility of an unscrupulous business owner,” the statement said.

Local media outlet Peru21 noted that the nightclub recently received a government loan from a program entitled “Reactivate Peru,” set up as a response to the economic impact of the pandemic.

The tragedy took place as Peru continues to struggle against the coronavirus, reporting 594,326 cases and 27,663 deaths. Although this is well below other places such as Brazil and the United States, Peru’s population of just 32 million people means that it has the second-highest number of deaths per million (DPM) people (864.76). Only Belgium has a higher rate, recording 864.76 DPM, while the United Kingdom lags behind in a distant third at 623.1 DPM. 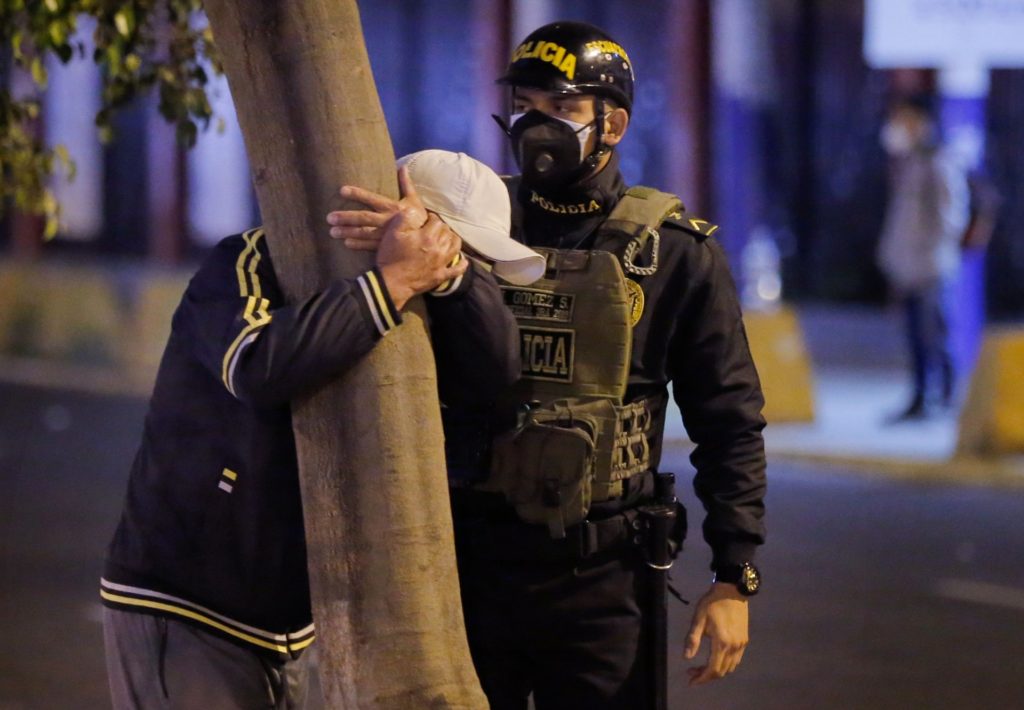 A police officers stands next to a man grieving the loss of a loved one on August 23, 2020 outside the nightclub in Lima where at least 13 people suffocated in a crush during a raid late on August 22 where a party was being held despite a ban on such gatherings imposed to fight the COVID-19 novel coronavirus pandemic. (LUKA GONZALES/AFP via Getty Images)

In April, nine Peruvian prisoners died during a prison riot demanding better sanitary conditions as a safeguard against the virus’s spread. Prisons are known to be high-risk facilities in terms of contagion, leading to many countries releasing non-violent or low-risk criminals to house arrest.