Authorities in Russia are recruiting rare dogs they claim can smell individuals infected with the Chinese coronavirus, the Moscow Times revealed in a report Monday.

The report detailed how trainers are currently putting a breed known as Shalaikas (a mix between Arctic Nenets herding dogs known as Laikas and Southern Turkmen golden jackals), through their paces in a warehouse outside Moscow’s main Sheremetyevo Airport.

“This is in many ways the perfect scent dog,” Yelena Batayeva, head of Aeroflot’s dog training service, told the English-language newspaper. “They have a highly unusual mix of Arctic and Southern blood. This gives them the unique skill of being able to pick up smells prevalent in both heavy warm air and light cold air particles that other dogs we have worked with couldn’t.”

Batayeva explained that such canines have previously been used to detect other serious illnesses, including cancer, thus potentially providing an “interesting solution” when it comes to tracking those infected with the highly contagious coronavirus.

Although the mainstream medical community often treats Russian trials with skepticism due to their lack of rigor – the country already claims to have successfully developed two separate coronavirus vaccines, though none have passed Phase Three clinical trials – researchers elsewhere have also claimed promising signs exist that dogs may be able to help with the virus’s detection, thus helping to speed up the process of returning to a life without restrictions. 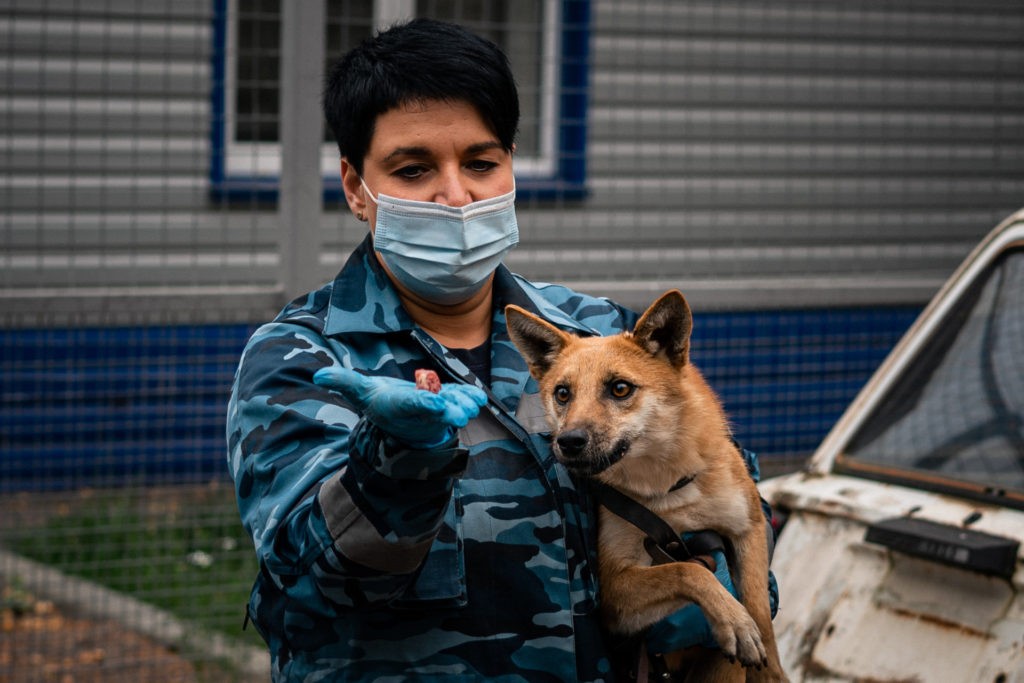 A trainer from the canine service of Russias Aeroflot carrier trains a sniffer dog to detect coronavirus in biomaterial from infected people near Moscow’s Sheremetyevo Airport on October 9, 2020. (DIMITAR DILKOFF/AFP via Getty Images)

The method has reportedly shown promising results, saving both time, money, and discomfort from passengers who are currently having to undergo saliva screenings, temperature checks, and nasal swabs.

Batayeva also dismissed fears that the trials might harm the dogs, many of which she adopted after they became too old to continue working as sniffers at the local airport.

“We are in uncharted territory here and we don’t know yet how the trial will end,” she explained. “But I believe the Shalaikas are up to the challenge.”

The efforts take place as Russia appears to be in the grip of a second wave of the virus. On Sunday, health authorities confirmed that it had broken its single-day record for coronavirus cases for the second day running. As of Wednesday, officials have recorded over 1.34 million cases and 23,205 deaths, the fourth-highest figures in the world.