Hundreds of schoolgirls kidnapped from their boarding school late last week in northwest Nigeria have finally been freed according to reports Tuesday.

The captors have released all 279 girls that had been abducted, most of whom were unharmed, although at least a dozen were sent to the hospital for treatment of injuries.

Earlier reports had placed the number of kidnapped schoolgirls the Government Girls Science Secondary (GGSS) School in the town of Jangebe at 317, but Zamfara state spokesman Sulaiman Tanau Anka clarified that some of the missing girls had escaped into the bush at the time of the assault.

On Friday around 1:00 am, some 100 armed gunmen stormed into the school and kidnapped the girls, aged between 12 and 17. This was the second school kidnapping to take place in Nigeria this year, just a week after bandits raided a school in Niger State and kidnapped over 40 people.

“They carried the sick ones that cannot move. We were walking in the stones and thorns,” said 15-year-old Farida Lawali, describing how kidnappers had taken her and the other girls to a forest.

“They started hitting us with guns so that we could move,” she added. “While they were beating them with guns, some of them were crying and moving at the same time.”

Bello Matawalle, the governor of Zamfara State, said Tuesday the girls had been released at dawn and are safe. “I am happy to announce that the girls have been released. They have just arrived at the government building and are in good health,” Matawalle said. 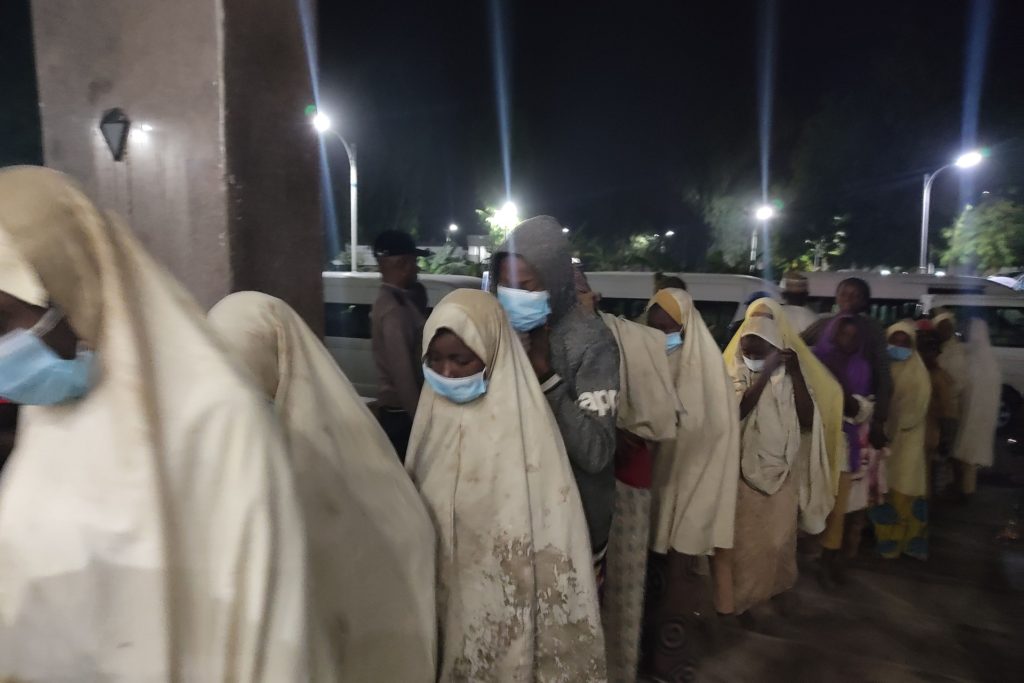 A group of girls previously kidnapped from their boarding school in northern Nigeria arrive on March 2, 2021 at the Government House in Gusau, Zamfara State upon their release. All 279 girls kidnapped from their boarding school have been released and are on government premises, the local governor told AFP Tuesday. ( AMINU ABUBAKAR/AFP via Getty Images)

“Alhamdulillah! It gladdens my heart to announce the release of the abducted students of GGSS Jangebe from captivity,” Matawalle wrote on Twitter. “This follows the scaling of several hurdles laid against our efforts. I enjoin all well-meaning Nigerians to rejoice with us as our daughters are now safe.”

Rumors had been circulating of ongoing negotiations between the authorities and the kidnappers. One source said that authorities were aware of where the girls were being held, but ruled out the idea of a military extraction so as not to endanger them unnecessarily.

More than 600 students have been kidnapped from schools in northwest Nigeria since December, a phenomenon authorities blame on “bandits,” a term encompassing kidnappers and other criminals who are motivated by money.

The rise in abductions has been attributed to a notoriously weak security infrastructure along with the common government practice of paying ransoms, which has made kidnapping a profitable source of income.

News of the girls’ liberation brings “overwhelming joy,” said Nigerian President Muhammadu Buhari. “I am pleased that their ordeal has come to a happy end without any incident.”

Last Friday, Buhari released a statement urging state governments “to review their policy of rewarding bandits with money and vehicles,” warning that the policy might “boomerang disastrously.”