Apple Daily on Friday reported eager customers lining up at midnight to buy the newspaper after five of its senior executives were arrested under Beijing’s tyrannical “national security law” and Hong Kong’s security minister warned the public to “keep a distance” from the publication.

The stampede for copies of Apple Daily was a remarkable show of defiance by Hongkongers the day after editor-in-chief Ryan Law and CEO Cheung Kim-hung of publisher Next Digital were arrested by a swarm of 500 Hong Kong police, who also seized computers and other assets from the pro-democracy paper.

Apple Daily surged its print run to 500,000 copies for the Friday issue and said vendors were still “clamoring for more” after readers bought up to a hundred copies each to show their support. Newsstand vendors said they were sold out by 2 A.M. and asked for thousands more copies to sell.

Reporters watched as business owners bought dozens of copies to give their customers. One restaurateur cried “For freedom!” as he lugged away a stack of 500 copies.

The Hong Kong Free Press (HKFP) found readers sharing Instagram photos of themselves and urging others to buy their own copies, using the hashtag #SupportAppleDaily in Chinese. Some marveled at the courage of the Apple Daily staff and publishers.

“Because of their persistence, and their fearless spirit, we can still know the truth today,” one reader wrote. 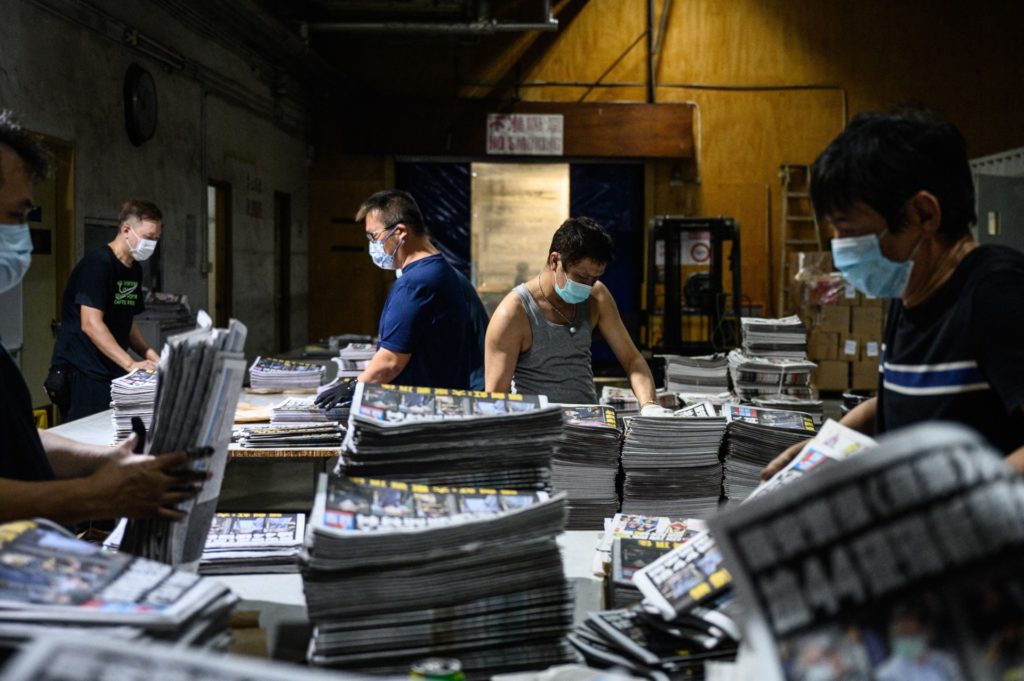 Employees compile different sections of freshly printed papers in the printing facility of the Apple Daily newspaper offices in Hong Kong early on June 18, 2021, after police arrested the chief editor and four executives of the pro-democracy newspaper the previous morning, raiding its newsroom for a second time in the latest blow to the outspoken tabloid. -(ANTHONY WALLACE/AFP via Getty Images)

Some said they rushed to buy Apple Daily in the wee hours of Friday morning because they feared the publication might be seized by the police. Others bought their copies early because the issue could sell out citywide by sunrise.

Many buyers were conscious of Apple Daily’s perilous financial situation after millions of dollars in assets were seized and trading in Next Daily stock was halted. They hoped buying multiple copies of the paper would provide much-needed revenue for the operation. France24 said on Thursday it is “unclear” whether Apple Daily can cover further production costs or pay its staff.

The edition of Apple Daily flying off the shelves has photos of the five arrested executives on the front page, and an editorial within that pledged to fight for free speech on behalf of all oppressed Hongkongers.

“From the arrests of Hong Kong pro-democracy primaries participants, to the large number of District Council members facing potential disqualification, to the arrests of the management and editorial staff of Apple Daily, how can the international community be convinced that the Hong Kong version of the National Security Law has not affected the freedom of the majority of the Hong Kong people, as claimed by Carrie Lam?” the editorial asked, referring to the chief executive of Hong Kong’s Beijing-controlled government.

The editorial noted that Apple Daily has been raided twice in 12 months, putting “enormous pressure” on the staff.

“However, the survival of Apple Daily depends not only on the degree of suppression by the authorities, but also on the readers of the newspaper. Hong Kong people, who once enjoyed freedom of the press and freedom of speech, will not easily give up their human rights, nor will they abandon Apple Daily, with whom they have a love-hate relationship,” it said.

HKFP visited the Apple Daily offices as the Friday edition was prepared and found them mostly empty but for a group of dedicated staffers working late into the night, their desks strewn with “pro-democracy paraphilia” and the walls covered with “protest posters and placards.”

Apple Daily staff soldiered on, and readers snapped up mountains of the Friday edition, even though Hong Kong security chief John Lee on Thursday denounced the publication as a subversive tool of foreign interests and warned that both reporters and readers might be persecuted under the national security law if they continue to associate with it.

The national security law carries a minimum sentence of ten years in prison for those found guilty.

“If you stand with these suspects, you will pay a hefty price. You should cut ties with the suspects or you’ll regret it very much,” Lee threatened.

“The suspects have been arrested on strong evidence that they’re conspiring to endanger national security. It is your choice whether you regard them as part of you, who go about your journalistic work lawfully and properly,” the security chief told the rest of Hong Kong media. 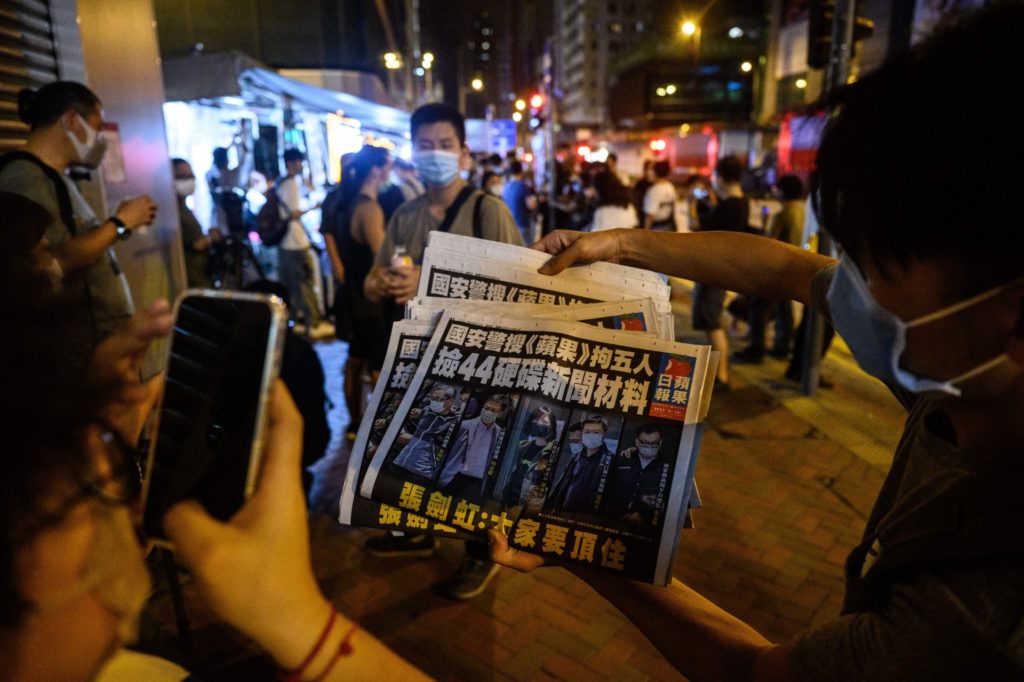 People take photos of a copy of the latest Apple Daily newspaper in Hong Kong early on June 18, 2021, after Hong Kong police arrested the chief editor and four executives of the pro-democracy newspaper the day before, raiding its newsroom for a second time in the latest blow to the outspoken tabloid. ((ANTHONY WALLACE/AFP via Getty Images)

Lee refused to answer when reporters asked if readers could be arrested for merely sharing Apple Daily posts or subscribing to the publication.

Denunciations of the Apple Daily raid rolled in from across the free world on Thursday and Friday. The U.S. State Department “strongly condemned” the raid, calling it an effort to “stifle media freedom.”

“We are concerned by increased efforts by authorities to wield the national security law as a tool to suppress independent media, to silence dissenting views, and to stifle freedom of expression,” said State Department spokesman Ned Price.

“These actions undermine Beijing’s obligations, their own obligations under the Sino-British Joint Declaration, which is a binding international agreement, to uphold Hong Kong’s high degree of autonomy and protected rights and freedoms,” Price noted.

The European Union (EU) said the raid “further demonstrates how the national security law is being used to stifle media freedom and freedom of expression in Hong Kong.”

“Freedom of the press is one of the rights China promised to protect in the Joint Declaration and should be respected,” British Foreign Secretary Dominic Raab stated, seconding the U.S. State Department and EU.