Yazidi representatives criticized Baghdad on Monday for failing to help facilitate the return of thousands of Yazidis to their homeland despite repeated pledges to do so since the Islamic State of Iraq and Syria (ISIS) forced the ethnoreligious group to flee the northwestern Iraqi district of Sinjar seven years ago.

“No serious action has been taken by the [Iraqi] government to resolve the situation of Yazidis,” Hewan Omar, a director for the Free Yezidi Foundation (FRF), said at an FRF conference on August 2, according to the Kurdish news site Rudaw.

Several Yazidis at the FRF conference “spoke of harsh life” in Internally Displaced Person (IDP) camps and “poor services and security [in Iraq]” as reasons preventing them from returning to their homeland near the Sinjar Mountains, according to Rudaw. 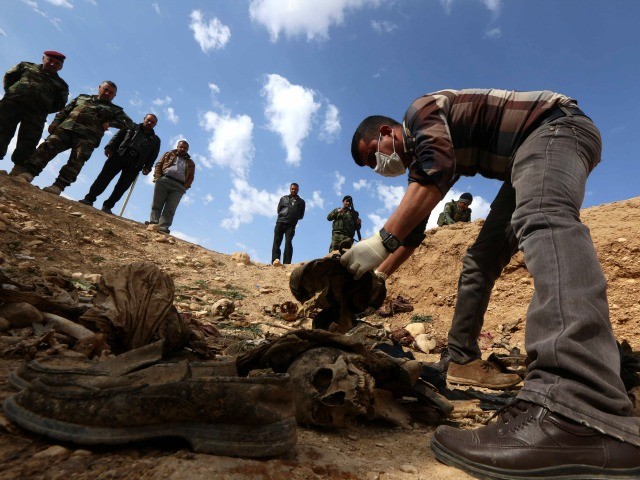 Members of the Yazidi minority search for clues on February 3, 2015, that might lead them to missing relatives in the remains of people killed by the Islamic State (IS) jihadist group, a day after Kurdish forces discovered a mass grave near the Iraqi village of Sinuni, in the northwestern Sinjar area. A peshmerga lieutenant colonel said the grave containing the remains of about 25 people was found during a search for explosives that IS often leaves behind, posing a threat to security forces and civilians even after they withdraw. (SAFIN HAMED/AFP/Getty Images)

Despite Sinjar’s liberation from ISIS in 2015, “much of the area still lies in ruins. Other parts of the district have scarce facilities, including hospitals and schools,” the news outlet noted on Monday, adding, “armed groups vying for control of the strategic area has also been cited as a factor preventing Yazidis from returning home.”

ISIS terrorists invaded Sinjar in the summer of 2014, forcing hundreds of thousands of Yazidis to flee the area for neighboring lands, including the autonomous Kurdistan Region of northern Iraq. Those who remained in Sinjar quickly became trapped and subject to what many states have formally recognized as genocide by ISIS, according to Rudaw. 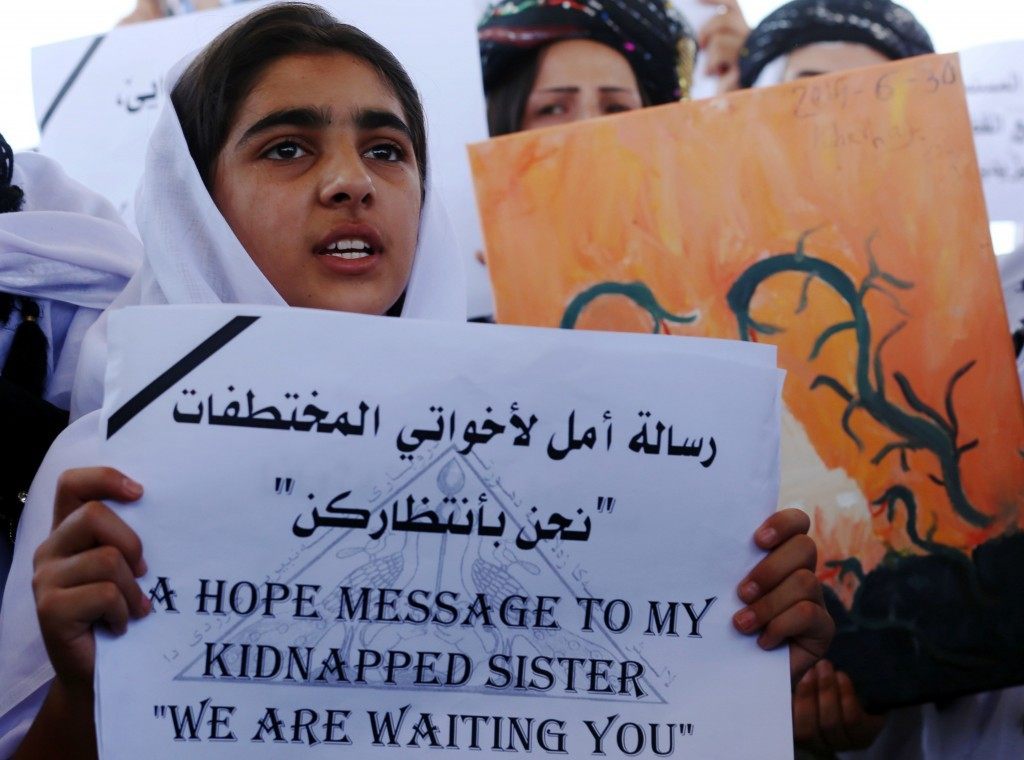 An Iraqi Yazidi woman holds a placards during a protest outside the United Nations (UN) office in the Iraqi city of Arbil, the capital of the autonomous Kurdish region, on August 2, 2015 in support of women from their community who were kidnapped last year in the Sinjar region by the Islamic State (IS) group jihadists. In 2014, the jihadists massacred Yazidis, forced tens of thousands of them to flee, captured thousands of girls and women as spoils of war and used them as sex slaves. (SAFIN HAMED/AFP/Getty Images)

ISIS, a Sunni jihadist terror group, considers Yazidis heretical devil worshippers for their unusual beliefs and thus targeted the group for eradication during its offensive to establish an Islamic caliphate in Iraq and Syria from about June 2014 to December 2017.

“Most Yazidis are Kurdish speakers, and while the majority consider themselves ethnically Kurdish, Yazidis are religiously distinct from Iraq’s predominantly Sunni Kurdish population,” according to a National Geographic profile of the group published in August 2014.

“Yazidism is an ancient faith, with a rich oral tradition that integrates some Islamic beliefs with elements of Zoroastrianism, the ancient Persian religion, and Mithraism, a mystery religion originating in the Eastern Mediterranean,” the magazine noted.

“This combining of various belief systems, known religiously as syncretism, was part of what branded them as heretics among Muslims,” according to National Geographic.

“Yazidis began to face accusations of devil worship from Muslims beginning in the late 16th and early 17th centuries,” the magazine explained.

“While the Yazidis believe in one god, a central figure in their faith is Tawûsî Melek, an angel who defies God and serves as an intermediary between man and the divine. To Muslims, the Yazidi account of Tawûsî Melek often sounds like the Quranic rendering of Shaytan — the devil — even though Tawûsî Melek is a force for good in the Yazidi religion,” according to the publication.