Mustapha Ben Messaoud, chief of Afghanistan field operations for the United Nations Children’s Fund (UNICEF), said on Tuesday he was “quite optimistic” about working with the Taliban after the Islamist conquerors allegedly “expressed support” for allowing girls to continue attending school.

The Taliban is infamous for not only forbidding girls to attend school but murdering those who defy its religious edicts. Taliban mullahs insist that Islamic sharia, the religious law, bars women from attending school, holding jobs, or traveling outside their homes without male escorts.

The Taliban also forces women to wear heavy full-body burqa coverings, so prices for burqas have reportedly soared 1000 percent as the formerly liberated women of Kabul scramble to purchase them. The previous Taliban regime routinely beat, whipped, and killed women for failing to wear a burqa.

Despite this grim history, Ben Messaoud told a U.N. briefing on Tuesday that UNICEF has “not had a single issue with the Taliban” in the 11 of its 13 field offices that are still operational.

“We have ongoing discussions, we are quite optimistic based on those discussions,” he said.

According to UNICEF, some local Taliban representatives claim they want schools for girls “up and running,” while others are waiting for instructions from their superiors. Ben Messaoud said a Taliban “health director” in Herat province made a point of asking female UNICEF employees to report for duty as normal. 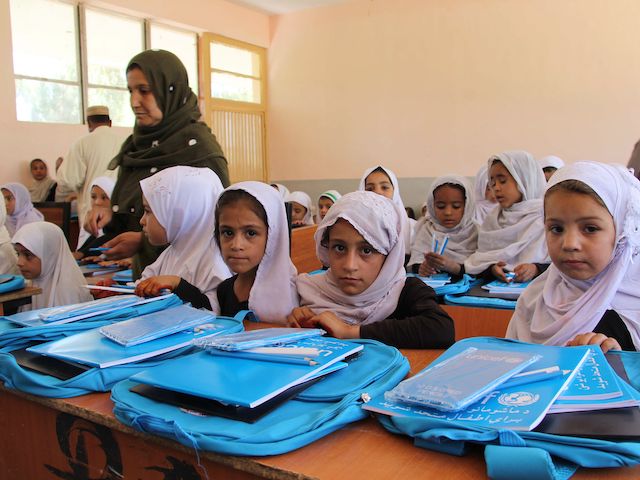 This picture taken on October 8, 2017, shows Afghan school girls looking on as they receive pens and bags from the United Nations Children’s Fund (UNICEF) at a school in Lashkar Gah in Helmand province. (Noor Mohammad/AFP via Getty Images)

Ben Messaoud added that he is aware of the Taliban’s horrific history of abusing women and called for urgent humanitarian aid to save the lives of Afghanistan’s children.

“Afghanistan has, for many years, been one of the worst places on Earth to be a child. In the past few weeks, it has got worse,” he said. “As we speak, if we do not take action immediately, UNICEF’s prediction is that without urgent action, 1 million children under the age of 5 will be severely malnourished by the end of 2021, and 3 million will be moderately acutely malnourished.”

UNICEF was heavily involved with building and expanding schools in Afghanistan throughout its 20 years of freedom from the Taliban, including schools for girls. UNICEF said attacks on those schools by Taliban fanatics persisted, and even surged in some years, leaving millions of children without educational resources.

In December 2020, after two years of negotiations, the Taliban agreed to let UNICEF open “informal schools” in the parts of Afghanistan it controlled. The Taliban controlled about half of Afghanistan’s territory at the time and seemed interested in rallying public support for its political and military push for control of the rest, as well as developing some international legitimacy for its nascent government.

According to polls, allowing girls to attend school is one of the few Western ideas that took hold in Afghanistan. A 2019 survey found 87 percent support for granting educational opportunities to girls.

The Taliban reportedly turned notably more hostile to allowing girls in school after President Joe Biden announced his plans for total U.S. troop withdrawal in April. Female teachers and students in Taliban-dominated regions described increasing pressure to shut their schools down. Female attendance and literacy rates, already in decline after peaking in 2011, fell even further.

After the Muslim holiday of Eid al-Fitr in May, Taliban commanders reportedly ordered rural schools to stop teaching girls. Threatening letters bearing the seal of the “Islamic Emirate” – the Taliban’s name for its government – were sent to schools in big cities.

Just before the Taliban announced a three-day ceasefire for Eid al-Fitr, a girl’s school in Kabul was destroyed with multiple car bombs. The attack killed at least 90 people, most of them girls between the ages of 11 and 15. The Afghan government held the Taliban responsible, while the Taliban claimed ISIS was behind the attack. 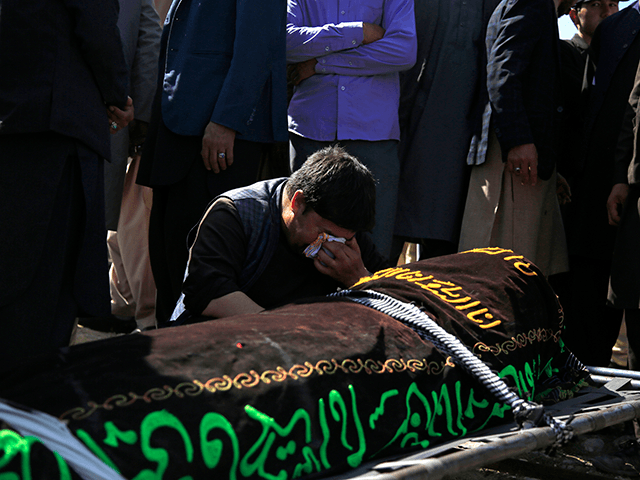 A man cries over the body of a victim of deadly bombings on Saturday near a school, at a cemetery west of Kabul, Afghanistan, Sunday, May 9, 2021. (Mariam Zuhaib/AP Photo)

A Taliban spokesman claimed on Tuesday that women will fare better under the new “Islamic Emirate,” including expanded opportunities for work and education.

“The Islamic Emirate of Afghanistan doesn’t want the women to be the victims anymore,” Taliban “cultural commissioner” Enamullah Samangani said on state television.

“The Islamic Emirate of Afghanistan is ready to provide women with environment to work and study, and the presence of women in different [government] structures according to Islamic law and in accordance with our cultural values,” he said.

Another Taliban spokesman, Zabihullah Mujahid, clarified that women will have “all their rights within the limits of Islam.”