Iran-backed terrorist group Hezbollah, which is also the most powerful political party in Lebanon, brought its first promised shipment of Iranian fuel into Lebanon on Thursday, transporting it by truck from a port in Syria. The move was applauded by Hezbollah supporters but could trigger U.S. sanctions against the already fragile Lebanese economy.

Reuters described a celebratory scene in the village of al-Ain, where onlookers waved Hezbollah flags and raised a banner that said “Thank You Iran, Thank You Assad’s Syria.” People tossed flower petals and rice at the Hezbollah trucks, and celebratory gunfire was reported, including at least one celebratory rocket-powered grenade.

“This is a very big and great thing for us because we broke the siege of America and foreign countries,” a Hezbollah supporter in Al-Ain told the Associated Press on Thursday. “We are working with the help of God and our great mother Iran.”

Hezbollah leaders disregarded warnings from the U.S. and Lebanese governments that they were not authorized to import the fuel and were violating U.S. sanctions against Iran. A Lebanese security official told Reuters that Hezbollah avoided government checkpoints and used an “unofficial border crossing” to bring the fuel from Syria. 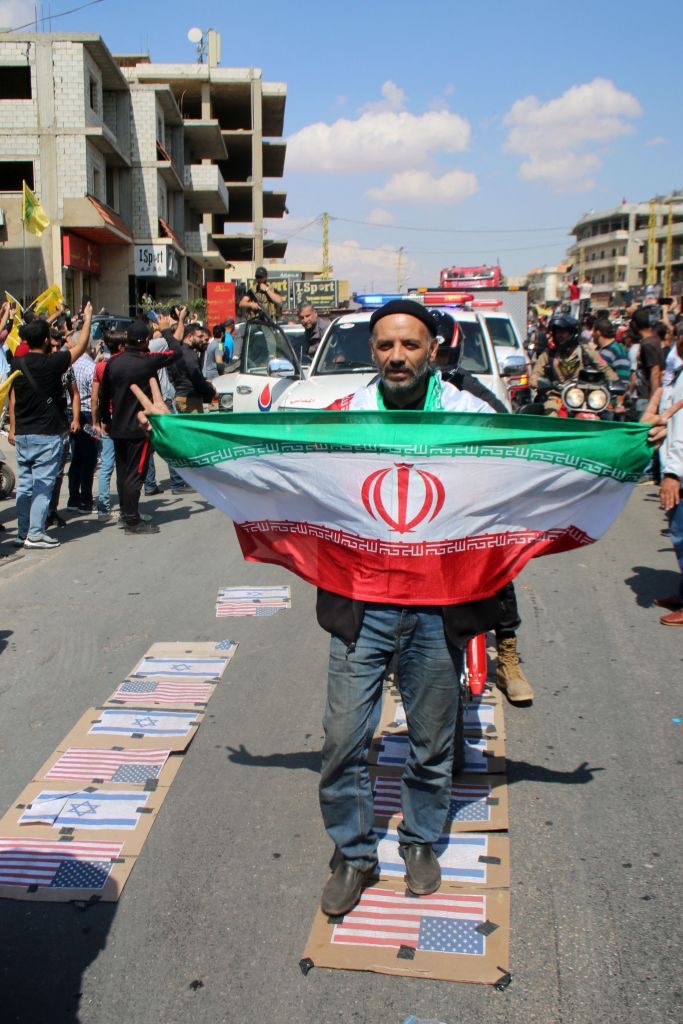 A man carrying an Iranian flag steps of U.S. flags, as people gather to welcome tankers carrying Iranian fuel, upon their arrival from Syria in the city of Baalbeck, in Lebanon’s Bekaa valley, on September 16, 2021.  (AFP via Getty Images)

Hezbollah leader Sayyed Hassan Nasrallah warned the U.S. and Israel not to intercept Iran’s fuel tankers when they set sail in mid-August.

Nasrallah said every nautical mile of ocean covered by the Iranian tankers would be “considered in Lebanese territory,” suggesting action against the ships would be considered an act of war by his terrorist gang, although he did not specify how they would retaliate if the shipment was halted.

Nasrallah also did not explain how cash-strapped Lebanon would pay for the fuel, a tricky question since Lebanon’s currency has devalued by 90% of the past two years, and many methods of remitting payment to Iran are blocked by sanctions.

Hezbollah declared on Thursday it has “broken the American siege” on Lebanon by bringing in fuel, while Iranian media lauded Nasrallah as the “savior of Lebanon,” hailed the Iran-Syria-Lebanon shipment as “the triangle of resistance that shattered American hegemony,” and jeered at Iran’s rivals in Saudi Arabia for doing nothing to resolve the Lebanese energy crisis.

“The Lebanese people, regardless of sect or component, welcomed the decision, and at a time when the Arab Gulf states, led by Saudi Arabia, have not taken any steps to help the Lebanese people despite their support for Lebanon, Iran became the Lebanese salvation card,” sniffed Iran’s state-run Tasnim news service.

Tasnim further taunted the U.S. by insisting the Biden administration must lift all sanctions against Syria, an indispensable link in the fuel supply chain from Iran to Lebanon. The Iranian news outlet interpreted “Israel’s silence on the arrival of Iranian fuel ships in Beirut” as an admission of defeat by the “Zionists.” 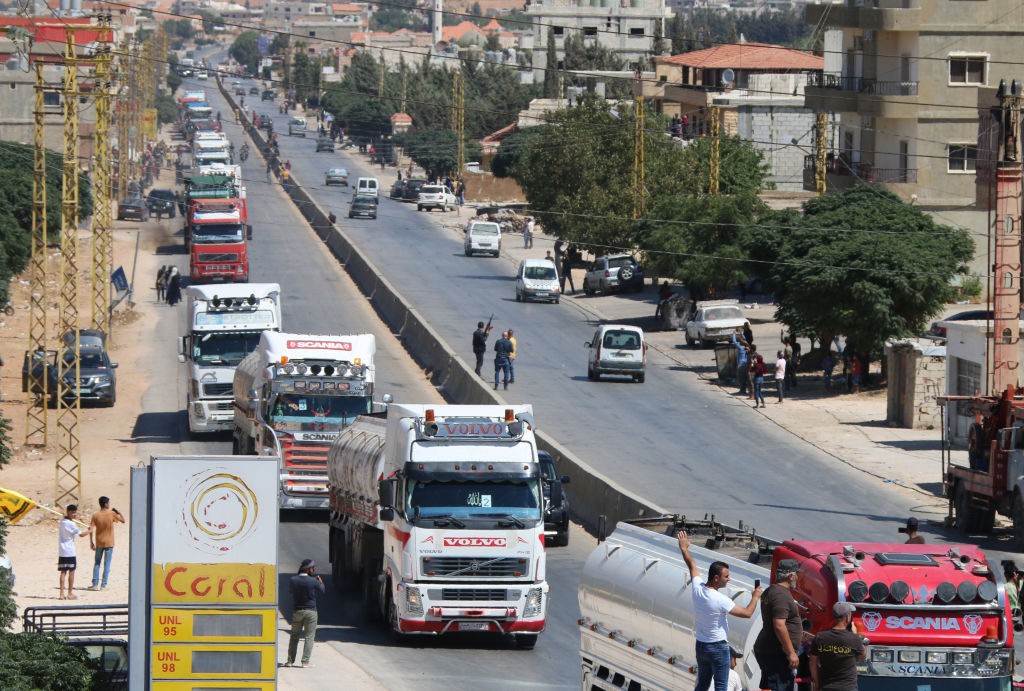 “This paves the way for Hezbollah to redouble its efforts to break the U.S. brutal siege of Lebanon, and this could even affect the border demarcation talks between Lebanon and occupied Palestine, and perhaps even use Iranian companies to extract Lebanese gas and oil,” Tasnim gushed.

The Jerusalem Post took a cynical view of these pronouncements from Hezbollah and Iran, suggesting Hezbollah’s true goal is to weaken the Lebanese economy and make it utterly dependent upon Iranian support, with Nasrallah and his gang serving as Tehran’s viceroys – and Iran, in turn, is only able to implement this strategy thanks to massive economic support from China:

This Janus-face use of Hezbollah, where Hezbollah is responsible for Lebanon’s economic collapse and benefits from it by making Lebanon dependent on Iran, is the same model Qatar used with the Taliban in Afghanistan. It empowered the Taliban to take over Afghanistan and also gained credit from the West for “helping” Afghans flee.

Iran alleges that conglomerates in Lebanon include companies that hoard goods and which are controlled by the US. Iran is thus positioning itself as warring with the US economically in the region. Iran has a new deal with China that may be part of the reason it now sees the economy as a frontline. Hezbollah has “created a new equation according to which Lebanese could turn to the East to resolve their economic crisis, led by the Islamic Republic of Iran and then Lebanon. It can operate freely in the commercial and economic spheres and gradually get out of American control,” the report says.

The AP noted the actual cause of Lebanon’s financial crisis and fuel shortage was “decades of corruption and mismanagement by the ruling class and a sectarian-based political system that thrives on patronage and nepotism,” a game Hezbollah played more ruthlessly than any other faction.

It didn’t help when someone who shares Hezbollah’s proclivity for bomb-making managed to blow the port of Beirut to smithereens last year by attempting to hoard dangerously unstable explosives, a bloody crime for which Lebanon’s dysfunctional system is unlikely to hold anyone accountable.

The frustrated judge in charge of the stagnant investigation, Tarek Bitar, issued an arrest warrant on Thursday for former public works minister Youssef Fenianos, the latest of many public officials who ignored a summons to testify. Bitar’s predecessor was fired merely for asking high public officials to testify. Fenianos’ lawyers argued on Thursday the clock has run out on the investigation and Bitar should no longer be allowed to summon anyone.

Hezbollah quickly vowed to murder and/or sue anyone who accused it of causing the explosion, which did not help the quest for justice. 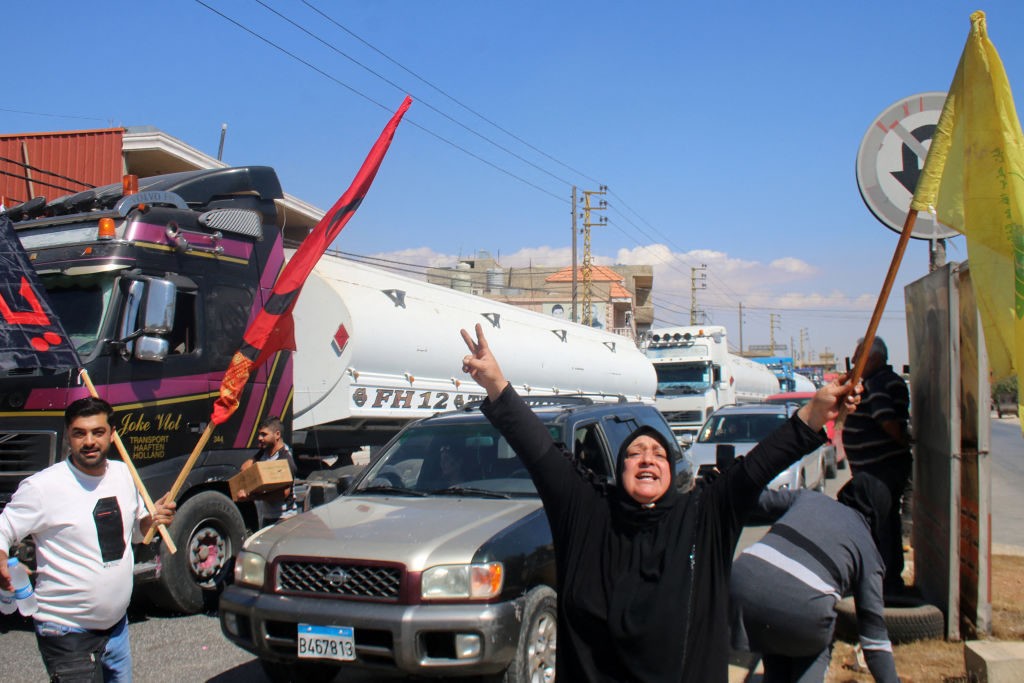 Fenianos is a member of a Christian political group allied with Hezbollah. The U.S. Treasury Department announced sanctions against him last week because he “provided material support to Hezbollah and engaged in corruption,” a move touted by the State Department as a warning shot to let Hezbollah and its allies know “they will be held accountable for enabling its terrorist and illicit activity.”

The fuel shipment illegally imported from Iran on Thursday was an act of defiance against those threats from the Biden administration. As of Thursday afternoon, there has been no comment on Hezbollah’s fuel delivery from the U.S. or Lebanese governments.

On Wednesday, 145 Lebanese and international human rights groups, plus victims of the Beirut port explosion and their advocates, signed a letter asking the U.N. Human Rights Council (UNHRC) to “urgently establish an investigative mission” into the blast.

The signatories noted Lebanese leaders have obstructed Judge Bitar’s investigation for over a year, and have used violence to break up protests by victims of the Beirut explosion when they demanded justice.