At least six people were killed in a mass shooting at Russia’s Perm University on Monday. Footage posted to Russian social media showed students jumping out of second-story windows to escape the gunman, who has been identified as a student at the university.

According to the BBC, the assailant walked onto the campus at around 11:00 a.m. local time and opened fire, hitting at least twenty people while students and teachers ran for cover.

The attacker was wounded and arrested by police.

“They jumped out in some horror, screaming,” a professor told the BBC, referring to the students leaping out of windows to escape.

“One of the students told me that it was a shooting. I heard pops, everyone began to scatter in different directions. I went to my students in the second building and continued to hear the pops,” the professor said.

“There were about 60 people in the classroom. We closed the door and barricaded it with chairs,” a student said.

Early reports said there were eight fatalities, but the authorities later revised this down to six, plus 28 injured.

The first press release from the university said the shooter used a “non-lethal gun,” but the Russian Investigative Committee (roughly analogous to the FBI) later said he used a legally-purchased hunting rifle. The Associated Press attempted to reconcile these reports by suggesting the shooter purchased a small-game rifle originally designed to fire rubber or plastic projectiles and modified it to use live ammunition. 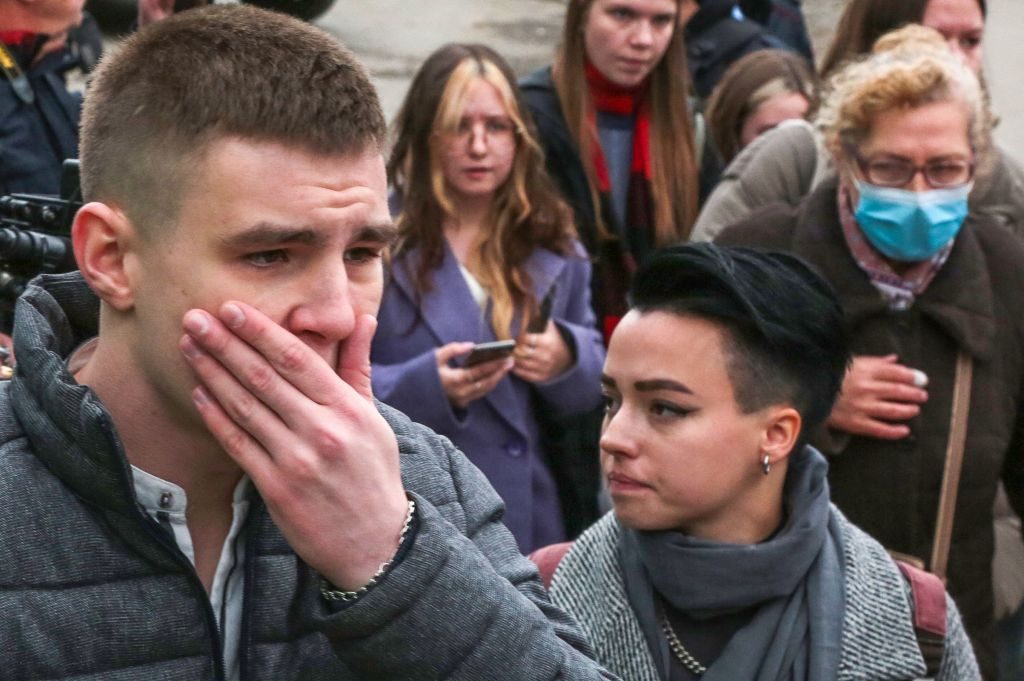 Students evacuate a building at the Perm State National Research University campus in the city of Perm, around 1,300 kilometres (800 miles) east of Moscow on September 20, 2021, following a shooting. (STRINGER/AFP via Getty Images)

The university initially announced the assailant had been “liquidated” by security forces, but later reported he was alive, recovering from his wounds in the hospital while in police custody.

“This is a great loss not only for the families who lost their children but for the whole country,” Russian President Vladimir Putin said in a televised statement on Monday.

The Moscow Times quoted Russian media sources who identified the gunman as 18-year-old Timur Bekmansurov. The sources said he described his plan to attack the university in a social media post where he described himself as “overflowing with hate.”

“What happened was not a terrorist attack (at least from a legal point of view). I was not a member of an extremist organization, I was nonreligious and apolitical. Nobody knew what I was going to do, I carried out all these actions myself,” the suspect reportedly wrote.

“I’ve thought about this for a long time, it’s been years, and I realized the time had come to do what I dreamt of,” he wrote, posting a photo of himself posing with a rifle, helmet, and ammunition according to Reuters. The social media post has since been deleted.