Serbian tennis star Novak Djokovic sparked a major controversy in Australia when he tried to enter the country to play in the upcoming Australian Open using a medical exemption for coronavirus vaccination.

Reports indicate that Australian Open organizers granted an exemption, but Australia’s Border Force revoked his visa when he arrived at Tullamarine Airport in Melbourne on Wednesday.

After a 12-hour standoff with the authorities, Djokovic was shuffled off to the infamous Park Hotel, an unpleasant Melbourne establishment the government uses to temporarily house detainees – and a major breeding ground for the Wuhan coronavirus. 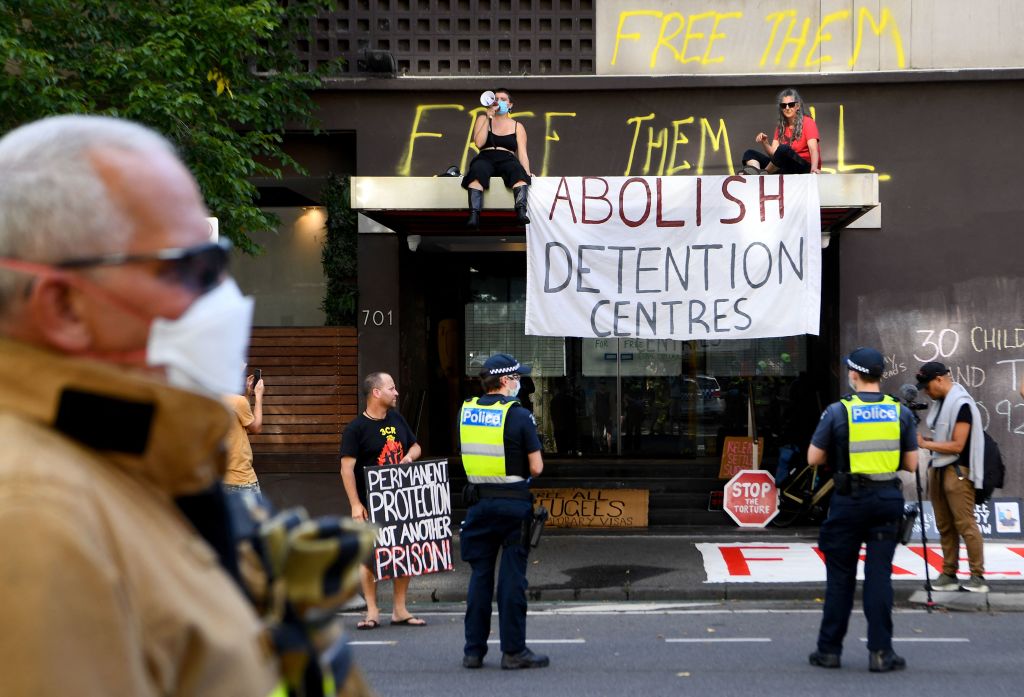 Pro-refugee activists sit on an awning over the hotel entrance where Serbia’s tennis player Novak Djokovic is reported to be staying along with detained refugees in Melbourne on January 6, 2022. (Photo by WILLIAM WEST/AFP via Getty Images)

Djokovic, 34, is one of the world’s best players and arguably among the all-time greats. If he wins one more Grand Slam title, he will set the men’s tennis record for championship trophies.

Djokovic was the smart-money favorite to win that 21st title in Melbourne in two weeks, but when he flew into town from Dubai on Wednesday, he was told his last-minute appeal to enter Australia without proof of Chinese coronavirus vaccination had been revoked. 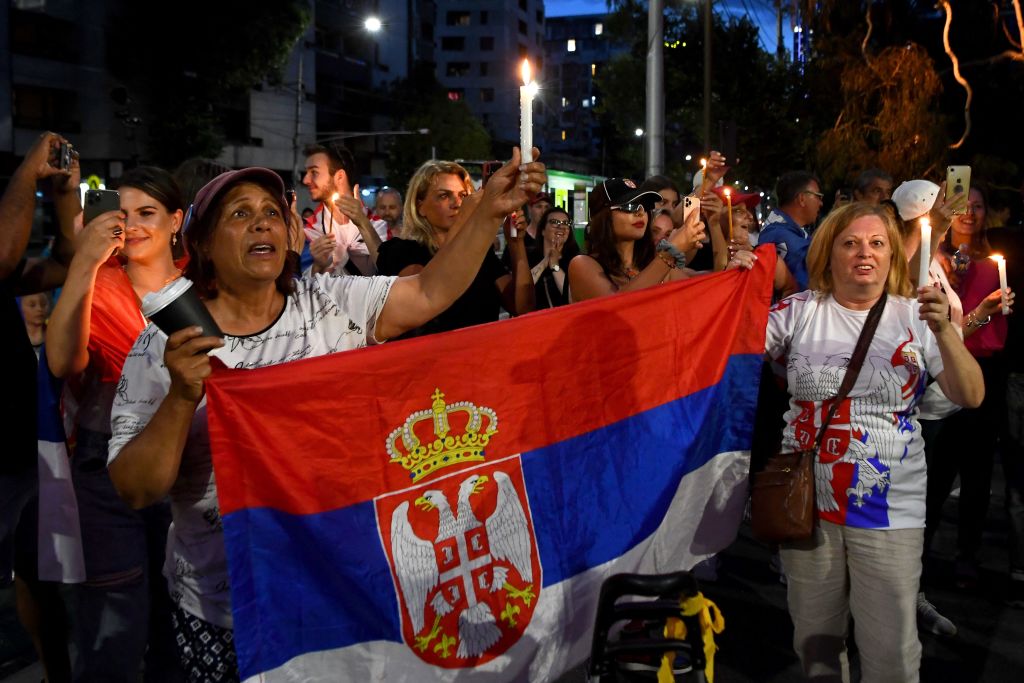 Members of the local Serbian community gather for a vigil outside a hotel where Serbia’s tennis champion Novak Djokovic is reported to be staying in Melbourne on January 6, 2022. (Photo by WILLIAM WEST/AFP via Getty Images)

Tennis Australia, the national governing body for the sport, said Djokovic’s request for a medical exemption was “granted following a rigorous review process involving two separate independent panels of medical experts,” although it did not specify the medical reasons for granting the waiver.

The Australian Border Force rejected Djokovic’s visa at the airport, beginning a 12-hour confrontation that soon involved high-ranking Australian officials, including Prime Minister Scott Morrison, who declared Djokovic did not “provide acceptable proof that he cannot be vaccinated for medical reasons.”

“If that evidence is insufficient, then he won’t be treated any different to anyone else and he’ll be on the next plane home. There should be no special rules for Novak Djokovic at all. None whatsoever,” Morrison said.

Australian media reported the reason Djokovic gave for desiring an exemption was that he contracted Chinese coronavirus last summer and recovered, giving him natural immunity. Morrison made remarks during his press conference that indicated this was the case. The Australian Border Force (ABF) is said to be reviewing at least two other recent vaccination exemptions granted on the same grounds.

Prime Minister Morrison and other administration officials noted the central government had final say about border admissions and could override waivers granted by provincial authorities.

Part of Djokovic’s problem appears to be that he tweeted about his waiver to enter Australia while he was in midair on the long flight from Dubai to Australia, prompting considerable public backlash against what appeared to be a special favor granted to a celebrity.

Morrison said as much on Thursday: “When you get people making public statements of what they say they have. and what they are going to do. and what their claims are. they draw significant attention to themselves. Anyone who does that – whether they are a celebrity, a politician, a tennis player, a journalist, whoever does that – they can expect to be asked questions more than others.” 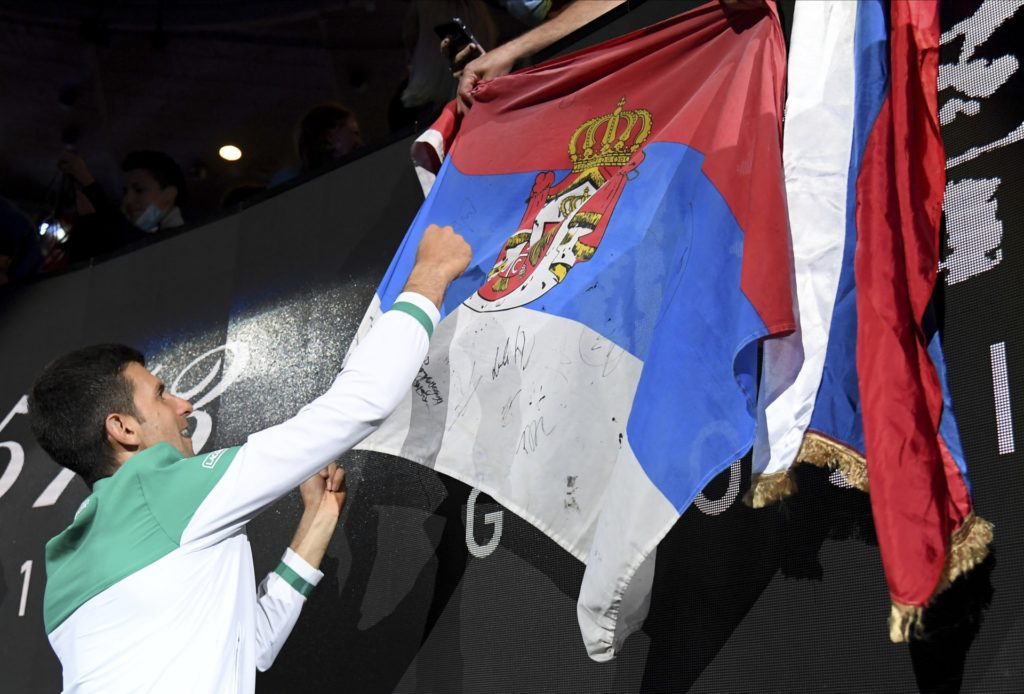 This candor might not have done Morrison and his government any favors, as it makes them look disorganized and prone to hairpin decision terms based on social media criticism. It certainly did not do the Australian government any favors with Serbians, who are beside themselves with outrage at Djokovic’s treatment. Rallies were held for Djokovic in Belgrade on Thursday.

Serbian President Aleksandar Vucic on Thursday accused the Australian government of conducting a “political witch hunt” against Djokovic, and said Prime Minister Morrison was merely “pretending that the rules apply to all.”

Vucic said the Australian ambassador to Serbia has been contacted, while Serbian Prime Minister Ana Brnabic will reach out to Australian officials and ask if Novak can stay in the house he rented for the Australian Open until a final judgment is reached in his case.

Djokovic is currently impounded at the Park Hotel in Melbourne’s Carlton district, a facility often used by the Australian government to hold detainees flown in from Australia’s island refugee camps when they required medical care. According to refugee advocates, at least 32 detainees are still being held at the Park Hotel.

Both guests and staff describe the Park as a hotbed of coronavirus transmission. Detainees complained of finding mold and maggots in their food, two fires broke out on the upper floors within the past two weeks, and Djokovic claims he found “bugs” in his room. In a final indignity, the UK Daily Mail dryly noted the Park does not have a tennis court.

These accommodations drove Serbian politicians and Djokovic’s family to the heights of outrage. A mixed crowd of Djokovic fans, Serbian emigres waving their national flag, and refugee advocates demonstrated outside the Park on Thursday.

Vucic called Djokovic incarceration at the Park “overkill” and sneered, “When you can’t defeat someone on the court, then you do such things.”

Djokovic’s father Srdjan compared the oppression of the star tennis player to the suffering visited upon Spartacus and Jesus Christ by the Romans.

“This has nothing to do with sports, this is a political agenda. Novak is the best player and the best athlete in the world, but several hundred million people from the West can’t stomach that,” he charged.

Djokovic’s former coaches denounced his treatment as “farcical” efforts by Australian politicians to curry favor with their voters and said they were treating the visiting tennis player “like a felon.”

“This decision, in my opinion, reflects lawlessness and not the rule of law. They have treated Novak like a criminal and a villain to stop him from winning his 21st grand slam,” said former Yugoslavia Davis Cup coach Radmilo Armenulic.