Islamic extremists raided the village of Masambo in the northeastern province of North Kivu in the Democratic Republic of the Congo (DRC) on April 3, the Barnabas Fund reported Thursday.

The raid by jihadists from the Allied Democratic Forces (ADF), a group allied to the Islamic State, is just one episode in a flood of Islamist violence across North Kivu and its neighboring province of Ituri, Barnabas noted in an email Tuesday.

“It is a miracle I survived,” said Masambo resident Kakule Saanane. “We were already in bed when we heard the sound of boots outside and bullets. It was after hearing victims’ cries that we realized it was a rebel raid.”

Saanane said that 21 dead bodies were found following the attack, which was carried out with machetes and guns; the figure has since risen to 28.

The ADF carried out a series of attacks in multiple villages during March 2022, killing more than 50 people in Ituri and at least another 30 in North Kivu. 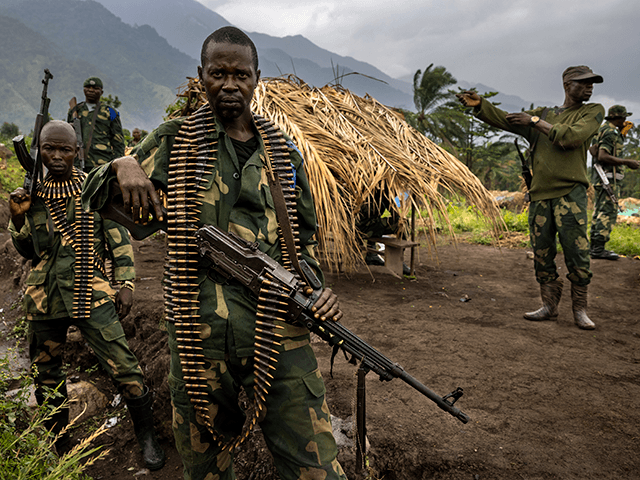 Soldiers from the Congolese Army Forces are seen in their forward operating bases around Mwenda, a small town that sits at the foot of the Rwenzori mountains, on April 7, 2021 in North Kivu, Democratic Republic of the Congo. It is close to Virunga National Park where a camp of ADF members live and hide. This town has been attacked multiple times by the ADF, with many civilians killed and some beheaded. A number of people including children have been abducted. As a result the Congolese army has a number of forward operating bases dotted around the area. The ADF is an Islamic terror group based out of Eastern DR Congo that, in recent years, has developed a relationship with the Islamic State after pledging allegiance to ISIS leadership. They are known locally as ISIS in Congo. ADF have killed over 5000 Congolese civilians in recent years, abducted and displaced thousands and killed over 2500 Congolese Army Soldiers. (Photo by Brent Stirton/Getty Images)

In May 2021, DRC President Felix Tshisekedi declared the two provinces to be in a “state of siege,” a situation that continues to this day.

A church leader in neighboring Uganda, birthplace of the ADF, declared that the jihadists are “mercilessly killing Christians” and many people are fleeing the DRC and seeking refuge in western Uganda. Africa News notes that in December, Uganda sent more than 1,000 soldiers to aid Congo’s army in their fight against ADF rebels in the region.

The Barnabas Fund, a charity that assists persecuted Christians, requested prayers for Christians in northeastern DRC, “asking for the Lord’s hand of protection over them.”

“Pray that Islamist extremism and other forms of violence in this troubled region will be brought to an end. Pray also for churches in western Uganda as they seek to help thousands of refugees who have fled across the border,” the group asked.