The Taliban regime on Thursday ordered all female television presenters to cover their faces while on the air.

The order was the latest example of the Islamist regime failing to live up to the absurdly optimistic “reform” expectations of the United Nations.

The Associated Press (AP) quoted Afghanistan’s independent TOLO News describing the order from the Taliban’s Virtue and Vice Ministry and Information and Culture Ministry, which both said the face-covering requirements were “final and non-negotiable.”

“Yesterday we met with media officials … they accepted our advice very happily,” claimed Virtue and Vice Ministry spokesman Akif Mahajar. He indicated compliance with this “advice” must begin no later than Saturday.

Mahajar said medical sanitary masks would be sufficient to hide women’s faces. He did not respond to questions about the penalty for disobedience. 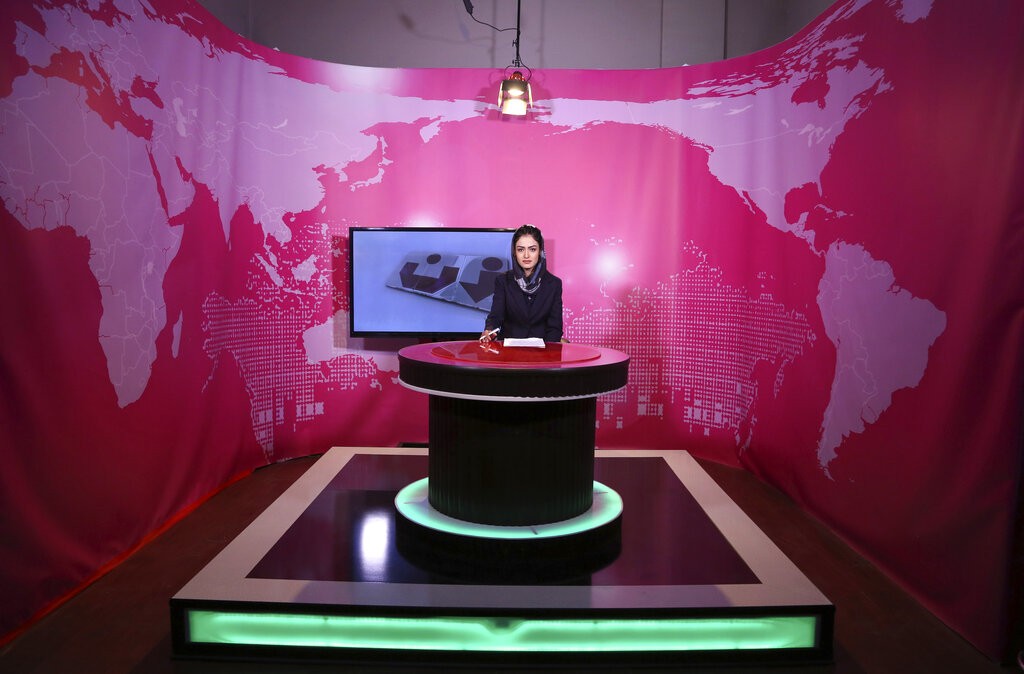 Basira Joya, 20, presenter of the news program, sits during a recording at the Zan TV station (women’s TV) in Kabul, Afghanistan, on May 30, 2017. Afghanistan’s Taliban regime ruled all female presenters on TV channels to cover their faces on air, the country’s biggest media outlet said Thursday, May 19, 2022. (AP Photo/Rahmat Gul)

The AP reported the reaction from Afghan media was a mixture of terrified obedience and sarcastic resistance:

An Afghan local media official confirmed his station had received the order and was told it was not up for discussion. He said the station has no other option. He spoke on condition he and his station not be identified for fear of problems with the authorities.

Several female anchors and presenters posted their photos on social media showing them with their faces covered with face masks during presenting programs. One prominent TOLO presenter, Yalda Ali, posted a video of herself putting on a face mask with a caption: “a woman being erased, on orders from the Virtue and Vice Ministry.”

On one station, Shamshad TV, implementation of the order was mixed: One woman anchor appeared with a face mask Thursday, while another later in the day went without, showing her face.

An anonymous woman who worked for a local TV channel told Reuters her office had already been visited by Taliban enforcers.

Within a few months of the takeover, U.N. Secretary-General Antonio Guterres was complaining about the Taliban’s “broken promises” to Afghan women and girls.

“Eighty percent of Afghanistan’s economy is informal, with a preponderant role of women. Without them, there is no way the Afghan economy and society will recover,” Guterres lectured the Taliban.

The alleged “moderation” of the Islamic Emirate completely dissolved by the beginning of May, when women were ordered to wear head-to-toe coverings, on pain of death for their male relatives if they disobeyed the dress code. Women were told to stay in their homes unless they could arrange male escorts. Girls were banned from school after the sixth grade.

The U.N. nevertheless voted in March to establish a formal mission in Afghanistan to “respond to the immediate humanitarian and economic crisis.”

The U.N. resolution said the permanent mission would closely consult with “all relevant Afghan political actors and stakeholders,” including the Taliban regime.