[This is the latest segment in an ongoing series about Code Pink and its co-founder Jodie Evans. Click here to read earlier articles.]

Following on the heels of their macabre Afghan war protest at a White House Halloween party that targeted children of military families for psychological abuse, leftist Obama ally Code Pink issued a statement justifying the terrorist attack at Fort Hood as opposition to the war from officers and put out a Veterans Day appeal seeking to raise money off the Fort Hood terrorist attack.

Signed by top Obama funder Jodie Evans, the appeal was published at Code Pink’s website on Veterans Day and sent out the same day to the group’s e-mail list. The terrorist attack at Fort Hood is cited three times in the fundraising letter. 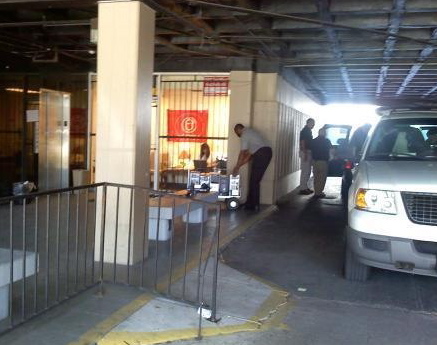 As appalling as cashing in on the mass murder of 14 innocents is, Code Pink tops that by invoking sympathy for the alleged terrorist as a reason to give money to Code Pink–even putting his act of terrorism on the same moral plane as the recent protest resignation of a former officer who left his diplomatic post in Afghanistan over Obama’s war policy:

“This Veteran’s Day, you can support Under the Hood and the soldiers who walk through their doors with a cash or in-kind donation…

“Click here to see how else you can support Under the Hood (in-kind donations accepted too).

“Our soldiers clearly need more care; the last thing they need is to be put into more harm’s way. Even US military officers think so–Matthew Hoh resigned from the Foreign Service in protest of the lack of clear mission and achievable results in Afghanistan, and of course the Ft. Hood shooter was a Major who did not wish to be deployed to Afghanistan.”

Think about that. Code Pink says a mass murder terrorist act against unarmed soldiers is the moral equivalance of a protest resignation.

Code Pink is even more direct in their justification for the terrorist attack allegedly by Maj. Nidal Malik Hasan in a statement posted to their website that they encourage opponents of America in Afghanistan to send to President Obama:

The recent shootings at Ft. Hood and the resignation of top Foreign Service officer Matthew Hoh demonstrate how even our military officers are opposed to US strategy in Afghanistan.

Code Pink claims the money will be used to fund a campaign operated out of a coffee shop near Fort Hood called Under the Hood that preys on soldiers and their families. However, the donation link goes to Code Pink’s fundraising page (https://salsa.democracyinaction.org/o/424/t/4589/shop/custom.jsp?donate_page_KEY=5533) and not to Under the Hood’s website (http://www.underthehoodcafe.org/donate.html). Note, fundraising links in this story are deliberately not active.

Under the Hood was opened earlier this year in Killeen, about a mile from Fort Hood, as a joint effort of the terrorist support groups Code Pink and Iraq Veterans Against the War (both groups participated in the World Tribunal on Iraq which openly supported the terrorists in Iraq.) The cafe is run by the wife and step-mother of servicemen, Cynthia Thomas, whom Code Pink took under their wings.

The cafe is a reprise of pro-communist efforts during the Vietnam War to undermine morale on the homefront by exploiting the vulnerabilities of soldiers and their families with subversive cafes opened near military bases across the country.

Reportedly Fort Lewis and Fort Drum have also been targeted with subversive cafes in recent years.

The name of the coffee shop, Under the Hood, is a wordplay on the subversive nature of the effort in Killeen.

In the fundraising letter, Code Pink uses the words of Cynthis Thomas to describe the true aim of Under the Hood–to get soldiers to quit fighting for America:

“For the soldiers who visit regularly, Under the Hood has become a home and we have become family. They tell us about their hardships, they ask for help, they seek information about their rights, and sometimes they find the strength to say NO to war” (empahsis added.)

Under the Hood’s home page includes a testimonial from Spc. Victor Agosto, “Afghanistan War Resister“:“The support I have received from my family at Under the Hood has helped me take the liberating leap from obedient soldier to war resister.

Code Pink opens the fundraising appeal with a cynical tug at the heart strings:

Over the course of its seven year existence, Code Pink has caused enormous anguish to our soldiers and their families by calling our troops murderers, assassains, baby killers, terrorists and more in protests at Walter Reed Army Medical Center, the White House Halloween party and the Berkeley Marine Corps officer recruiting centers as well as in numerous public statements.

Code Pink has a documented history of working with state sponsors of terrorism who wage war on our troops and of supporting terrorist groups that target our troops and our Middle East allies.

When the U.S. liberated Iraq in 2003, Code Pink opened Occupation Watch, an office in Baghdad similar in purpose to Under the Hood in its goal to subvert the war effort by trying to get soldiers to quit fighting for America.

Code Pink’s history of working with America’s terrorist enemies has not prevented President Obama from allying himself with Code Pink co-founder Jodie Evans. She was tapped by the nascent Obama presidential campaign to co-host its breakthrough Hollywood fundraiser in February 2007. She was subsequently appointed a bundler for the campaign.

Last month, Obama allowed himself to be filmed and photographed with Jodie Evans at a $30,400 per couple fundraiser in San Francisco as she handed him a propaganda packet about Afghanistan. Evans was wearing Code Pink propaganda attire when she met Obama, a coup that she will surely share with her allies including Mahmoud Ahmadinejad and Hugo Chavez to demonstrate her influence at the highest levels of the United States government.

Blue Star mother Becky Davis, who has three sons in the military–all of whom have seen service in Iraq and Afghanistan–was outraged when she read the appeal from Code Pink seeking to raise funds from the Fort Hood massacre.

Davis founded a group called Military Families Voice of Victory with her husband several years ago. She keeps tabs on subversive groups like Code Pink as part of her efforts.

“I am appalled and outraged that Code Pink gets a pass from the mainstream media over the damage it does when they fund subversives and actively work to undermine the mission and morale of our troops, which can be deadly to our troops and our fellow Americans.

“Code Pink’s justification for the terrorist attack at Fort Hood as opposition to the war in Afghanistan by officers is seditious.

“I hope the government thoroughly investigates Hasan’s connections to domestic groups, regardless of where that might lead.

“As the mother of three servicemen, I wonder why President Obama works with Code Pink, when they so openly work with our nation’s enemies.”

Code Pink has been widely reported as softening their stance on Afghanistan after a recent trip there. Jodie Evans denied that in an interview with Donald Douglas of American Power:

I asked her about Wednesday’s report in the Christian Science Monitor, ” ‘Code Pink’ Rethinks Its Call for Afghanistan Pullout.” Ms. Evans emphatically rejected the thesis of the article. Medea Benjamin was “misquoted,” she told me. Code Pink wants to bring the troops home, now! — there’s been no “rethinking” of the group’s demand for withdrawal of U.S. forces…She said she’d “been on the phone all day” clarifying Code Pink’s position on the war. A troop withdrawal remains the objective, but the U.S. should stay to focus on improving quality of life.