The St. Louis Post Dispatch reported at the time:

Kenneth Gladney, a 38-year-old conservative activist from St. Louis, said he was attacked by some of those arrested as he handed out yellow flags with “Don’t tread on me” printed on them. He spoke to the Post-Dispatch from the emergency room of the St. John’s Mercy Medical Center, where he said he was waiting to be treated for injuries to his knee, back, elbow, shoulder and face that he suffered in the attack. Gladney, who is black, said one of his attackers, also a black man, used a racial slur against him before the attack started.

Kenneth Gladney was beaten by several SEIU thugs after the meeting let out. He was working outside the town hall event selling flags and buttons when he was attacked. 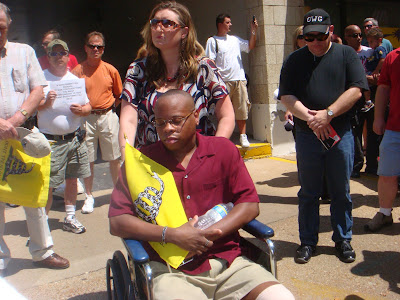 Although he was too weak to speak after his public beating, Kenneth Gladney attended the protest against SEIU violence following his beatdown in St. Louis.

We just found out that all the SEIU members plead not guilty to the charges and so we are going to trial.

See you in court.