Spotted in the wild, south of the Illinois-Wisconsin border! 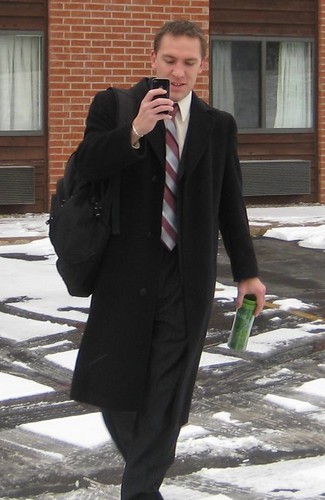 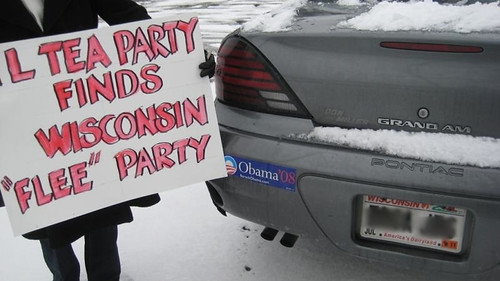 UPDATE: Is this Chris Larson?

UPDATE: We are receiving reports that the police were called out against the Illinois Tea Party members who found the Wisconsin Democrats in a local hotel. From a Tea Party member on the ground in Illinois:

Subject: OUTCOME OF THE CONFRONTATION WITH FLEEING DEMS

Illinois Tea Party board member Doc got the Heritage Suites in Harvard, and found the fleeing senators in the lobby of the motel. He said that they were laughing like school children. News cameras were there.

Doc confronted the senators, saying, “Do you know any reason why you shouldn’t be recalled for your failure to fulfill the duties of your office?” and the like. They asked him who he was. When he identified himself as a member of Northern IL Tea Party the mood changed. The hotel clerk asked him if he was a paying guest. He/she said, if he wasn’t he would have to leave.

Doc asked if this was still America. The clerk called the police. Three cars pulled up. Doc went outside and said, “I guess I’m the guy you’re looking for.” They said they had to go into the lobby to pick up the complaint against him.

Doc was interviewed by a reporter outside the hotel. The reporter asked for his name, and Doc said, “It’s “Doc” — if they’re going to try to arrest me, that’s all you need.” Then he drove away.

Mary Alger, Coordinator of McHenry County Tea Party was outside the lobby with her sign, “We’re the Tea Party. They’re the Flee Party.” She was interviewed.