One of the tactics of the Progressive Left is to ridicule their targets. Frequently, the vehicle of that ridicule is the label of ‘stupid’ or ‘moron’ or ‘idiot’.

This tactic is on full display in Madison, as sign after sign mocks Governor Walker for not completing college.

Why is the Progressive Left allowed to assert that the lowly uneducated masses of non-degree holders are not fit for office? The implication is that if you do not have a college degree, you are only fit to be governed. That is a very snobbish meme.

Don’t be fooled into thinking their snobbish meme contains legitimate criticism, because the last three Republican presidents ALL had at least their undergraduate degrees, and ALL three were labeled as idiots and fools by the Progressive Left.

Putting that argument aside for a moment though, let’s just examine one element of this Progressive claim of intellectual superiority over the Governor of Wisconsin, because the location and make up of this specific protest crowd makes this so fascinating.

There are educated people in the trades, to be sure. Especially among teachers. This is undisputed. But there are also a TON of GED holders and college drop-outs marching around the capitol of Wisconsin. By the looks of some of the anarchists (IWW), some of them might not have even made it through high school. Whatever.

But what’s so fascinating is that this mix of educated and uneducated union folk marching around the capitol are supplemented by a large group of highly educated University of Wisconsin students/faculty.

Imagine for a moment that you are a GED certified, non-degree holding fire fighter, or SEIU janitor, marching next to a college professor or student who is holding a sign that mocks another man for his level of education.

How would you feel in that moment? Would you conclude that you are too stupid to hold elected office as well? Would that message offend you? 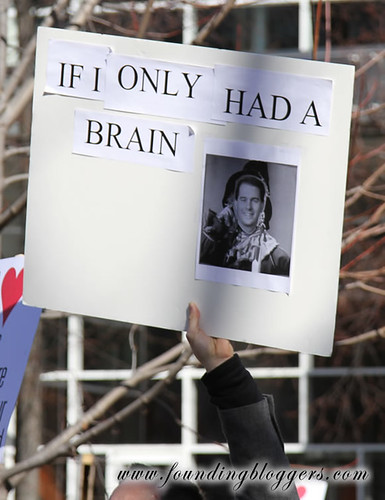 Yet not a peep of objection from any of the equally so-called uneducated marchers!

And let’s take a glance at the media here. We have a lot of friends in the media. A certain percentage of them do not have college degrees. Are they too stupid to hold office? We wonder how they must feel when they see this meme perpetrated against their fellow non-degree holders. 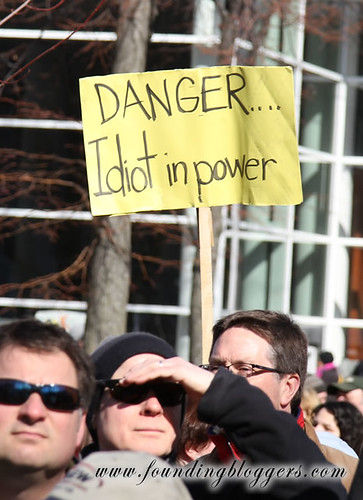 And yet we have yet to see one case of anyone on the Progressive Left, degree holding or not, object to this offensive tactic.

Isn’t it time to stop discriminating against people who are educated at allegedly lesser levels than the Big Ten or Ivy League elites? Or is it okay to be a snob – as long as your are a Progressive snob?