Does anyone out there know where we can find a copy of the full recording of His Presidency’s comments to donors in Chicago, made accidentally over an open mic?

We have only been able to find select “heavily edited” moments from the recording.

CBS broke the story by releasing the following short clip containing just Obama’s comments about the Republicans thinking he is stupid, and His Presidency’s comments on Paul Ryan: 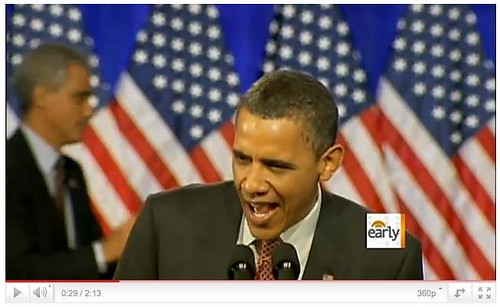 But where is the audio of the section where the President of the United States of America referred to some Americans as “slugs?”

He did opine that some employees “are slugs and not trying to do their job. But that’s true of any large institution.”

If His Presidency of the United States referred to a group of Americans as “slugs” and it was recorded, that is news and we deserve to hear it. At least so that we might judge for ourselves just how much insight his comments provide on his assessment of the American people. For all we know, it sounds better than it reads, but it reads pretty bad.

Here is the audio of the section where the President of the Untied States laments that there is not enough revolutionary spirit in Qatar because they are too economically successful:

There’s no big move towards democracy in Qatar,” Obama said. “But you know part of the reason is that the per capita income of Qatar is 145,000 dollars a year. That will dampen a lot of conflict,” he added.

You would be forgiven for concluding that His Presidency would like to people of Qatar to suffer economic hardship, cynically, so that there would be more fertile ground for revolution. Can you imagine the headlines if President Bush had said the same thing about any one of the Socialist death camps like Cuba or Venezuela?

But returning to the subject at hand, why is CBS only releasing a “heavily edited” version of this tape? And why aren’t all the media experts and critics demanding the full release of the complete recording?

We certainty concede that we might simply be looking in the wrong place, or that we are ignorant as to when the recording ended and the first hand reports began, but we would sure like to know where the FULL UNEDITED RECORDING of His Presidency’s comments can be found.

It seems like every time certain bloggers and video activists release damning candid material, the media elites demand the full recordings as a form of journalistic purity test.

Live up to your own code ABC, CBS, NBC, Etc… Release the full recording and transcript of His Presidency’s potentially damning comments.