In a Christmas break message to his party, Communist Party USA vice chair Jarvis Tyner has confirmed the vital importance of the build up to the 2012 elections to “set the stage for a new progressive era and for a socialist transformation.”

Tyner draws clear right/left battle lines and the communist’s commitment to Party ‘friend’ President Barack Obama and to the Democratic Party cause; 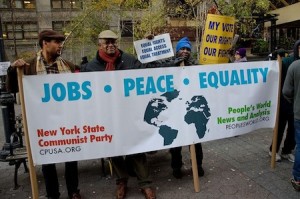 2012 is a big election year and as we know the stakes are very high. The right-wing Republican opposition unashamedly defends the wealth and privilege of the 1% over the 99% that includes tens of millions who are struggling to survive. These self-proclaimed patriots are willing to wreck our country in order to defeat Barack Obama in 2012 elections. Our party and youth league are an active part of the great democratic mass that is standing against them.

Jarvis Tyner also makes it clear that a key part of the Communist Party/Democratic Party game plan, will be use of the “race card”.

If the Republicans and Tea Party gang want people to stop accusing them of racism, there is a solution. They must end their long history of using racist scapegoating and pushing racist policies and practices. After the passage of the Civil rights and voting rights acts in the mid sixties the racist Southern white Democrats (called “Dixiecrats”) en mass joined the ranks of the Republican Party. They were warmly welcomed. Today without their racist Southern base of voters the Republicans could not win the presidency, or any national election. They literally thrive on racism as a party. And that is why there is a virulent racist component to almost every program they advance today.

It begins with the disgraceful attacks on the first African American president. But continues also on the issues of reducing the size of the federal government and privatization, which means that the government will not be able to stop massive corporate abuse of working people.

It means the destruction of vital public services and the jobs of public workers who are disproportionately African American and Latino unionized workers. And the privatization, characterization and destruction of public education are primarily aimed at predominantly Black and Latino school.

The racist component is dramatically present in the incarceration rates for African-American males and the use of the death penalty. Since a higher proportion of African American and Latino workers are members of unions then other racial groups, the Republicans pro-corporate anti-union drive also has a strong racist component. One of the most backward parts of the Republican program is the racist attack on Mexican immigrants.

There is a direct correlation between the level of racism and the fight for democracy, peace and for socialism. In our country in a special way, racism blunts the fight against capitalist exploitation and oppression and US imperialism. These struggles cannot be advanced without an ongoing struggle against racism.

Tyner then goes onto outline the Communist Party’s commitment to Democratic Party victories over several decades;

Our party had clear differences with the liberal John F. Kennedy but in 1960 election our policy was defeat Nixon. Same with 1964 — defeat Goldwater. In 1968 we had a Presidential ticket but our strategy remained–defeat Nixon. In 1972, when I ran with Gus Hall, the sharpest edge of our criticism was against Nixon.

In 1976, Carter ran against Ford. The sharpest edge of our campaign was against Ford and the Republicans. All the while we have had big differences with the Democrats but policies of the Republican right represented the main danger and the main obstacle to moving forward. The fight to advance the democratic and revolutionary process forward toward greater and greater changes requires defeating the greatest danger. And that is what we did. And the process did go forward.

Tyner blames Obama’s limited successes, on the movement that backed him. To Tyner, the left was only able to make big gains in America during the 1930s, even under Democratic presidents, because of the major leftist social movements of that era – which, though Tyner doesn’t say it, were largely communist controlled.

Now is the time for a new social upheaval, to pressure Obama into doing what the left wants – or more accurately to give Obama an excuse to do what he wants to anyway;

It is true Obama has fallen short on some issues and made concessions and some tactical turns to which we take exception. That was the Obama with out the militant social movement that Roosevelt had during the New Deal.

The democratic forces are getting their second wind. Congresswomen Donna Edwards described this period as a “FDR moment.” At the height of the Wisconsin struggle, the Rev. Jesse Jackson described it as a “Martin Luther King moment…”

What were they talking about? They are talking about a new willingness to struggle by democratic masses, about new movements emerging. There is a new movement among the youth. It has a great potential of gaining a deeper understanding of what are winning tactics. Their demands can be won with a broader more inclusive approach…. Higher levels of class and racial unity must be achieved for further progress.

Where will this new movement come from? Tyner makes it clear that it will come from new alliances of existing organizations – including the labor movement and Occupy Wall Street. If the communists have their way, the GOP and the Tea Party movement will be shunted aside. The communist led “peace movement”, no longer concerned with Iraq, will turn its attention to domestic issues;

New battle lines have been drawn. The Occupy Wall Street movement and the fight for the American Jobs Act have fired up the democratic forces. They are taking the offensive. We must continue to be fully involved. The announcement that the troops will be withdrawn from Iraq means it’s time for peace action!

The Occupy Wall Street movement based on the reality that the problem is the 1% capitalist ruling class and “we the people” are the 99% majority. That is an advanced idea and in harmony with our anti monopoly strategy. But to mobilize the 99% means building a popular front style movement. Narrow sectarian politics of “my way or the highway” will not suffice. Views that “I will only work with the left, and the center is the enemy” will not mobilize the 99%.

Why are we confident about this point? Because it was the broad united from tactics that our party brought forth that was key to basic change like defeating fascism and that built the New Deal and industrial unions.

Next year we are proposing a national conference on strategy and tactics. How do we get to socialism? The incredible 2011 election victories in Ohio, Mississippi, Arizona, Maine, New Jersey and elsewhere tell us a lot about where masses are at politically. It’s time for action; to mobilize masses for jobs, to tax the rich and to register, educate and mobilize, voters for next November and beyond. The right wing can be defeated in 2012.

Organized labor understands this. The major anti racist organizations under stand this…

And I can tell you, comrades, we can criticize Obama, and when it is done in a united front way he has shown that he can be moved. The whole effort of the Congressional Black Caucus and Progressive Caucus to organize town meetings and job fairs, which drew large crowds across the country, played a big role in pushing Obama to come up with his American Jobs Act, which is laying the basis for a big defeat of the right in 2012.

Frankly comrades, speaking as one who has been politically active under nine different presidents — five of the right wing Republicans, four liberal Democrats — all the while pushing for progressive change and the ideal of a socialist USA; from many decades of struggling and pushing for change, nothing Barack Obama has done or failed to do in the last three years is a reason to sit back and not take part in this tremendous historic struggle to defeat the extreme right wing at the polls next year.

We need to treat this like the life and death struggle that it is. As Sam Webb has put it …If you want to know what the Right will do to the country look at what they are doing everywhere they dominate the political and legislative process. What the working class did last week in Ohio, Mississippi, Maine, Arizona and New Jersey showed a high understanding of what is at stake and a determination to reverse the setback in 2010. This battle can be won. For sure, cynicism and pessimism will not lead to victory. It will take a lot of work. There will be setbacks and disappointments no doubt. But we can and must be optimistic: this battle can be won.

The tea party was supposed to be the new majority trend in our country. But where is the tea party now? They are still a well-organized and financed group. They tried to help Walker and Kasich. I’m sure they were working in Ohio, Miss., etc., but they could not match the united might of organized labor, the unity of black, brown and white, Asian Pacific, Native American Indian in struggle. Men, women, youth, old, gay and straight – united nothing can stop us.

Where was the tea party? They had plenty of money but they were out organized, out strategized, and most importantly, their bankrupt ideas are losing support among honest working people. They are not a match for the united power of the organized working people, along with racial and nationally oppressed, youth and students, women, LGBT, peace and justice struggling together in a broad popular front. That’s what is needed to turn the tide.

Our job is to contribute all that we can to maximize that power. And that is what will set the stage for a new progressive era and for a socialist transformation. Big progressive change is closer then we think.

If Tyner’s message isn’t a wake up call to US patriots and conservatives, nothing will be. This guy is serious, and while his party is small he has the influence to back his ideas with organzation and action.

2012 may well be the year that decides the fate of America, and indeed the world.

Dont let Jarvis Tyner and the Communist Party tip the balance in the wrong direction.