Andrew Breitbart was never a “Birther,” and Breitbart News is a site that has never advocated the narrative of “Birtherism.” In fact, Andrew believed, as we do, that President Barack Obama was born in Honolulu, Hawaii, on August 4, 1961.

Yet Andrew also believed that the complicit mainstream media had refused to examine President Obama’s ideological past, or the carefully crafted persona he and his advisers had constructed for him.

It is for that reason that we launched “The Vetting,” an ongoing series in which we explore the ideological background of President Obama (and other presidential candidates)–not to re-litigate 2008, but because ideas and actions have consequences.

It is also in that spirit that we discovered, and now present, the booklet described below–one that includes a marketing pitch for a forthcoming book by a then-young, otherwise unknown former president of the Harvard Law Review.

It is evidence–not of the President’s foreign origin, but that Barack Obama’s public persona has perhaps been presented differently at different times.

Breitbart News has obtained a promotional booklet produced in 1991 by Barack Obama’s then-literary agency, Acton & Dystel, which touts Obama as “born in Kenya and raised in Indonesia and Hawaii.”

The booklet, which was distributed to “business colleagues” in the publishing industry, includes a brief biography of Obama among the biographies of eighty-nine other authors represented by Acton & Dystel.

Obama’s biography in the booklet is as follows (image and text below):

Barack Obama, the first African-American president of the Harvard Law Review, was born in Kenya and raised in Indonesia and Hawaii.  The son of an American anthropologist and a Kenyan finance minister, he attended Columbia University and worked as a financial journalist and editor for Business International Corporation.   He served as project coordinator in Harlem for the New York Public Interest Research Group, and was Executive Director of the Developing Communities Project in Chicago’s South Side. His commitment to social and racial issues will be evident in his first book, Journeys in Black and White.

The booklet, which is thirty-six pages long, is printed in blue ink (and, on the cover, silver/grey ink), using offset lithography. It purports to celebrate the fifteenth anniversary of Acton & Dystel, which was founded in 1976. 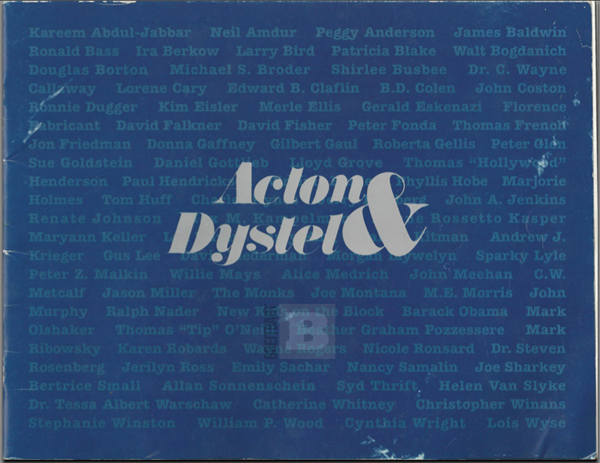 Jay Acton no longer represents Obama. However, Jane Dystel still lists Obama as a client on her agency’s website.

According to the booklet itself, the text was edited by Miriam Goderich, who has since become Dystel’s partner at Dystel & Goderich, an agency founded in 1994. Breitbart News attempted to reach Goderich by telephone several times over several days. Her calls are screened by an automated service that requires callers to state their name and company, which we did. She never answered.

The design of the booklet was undertaken by Richard Bellsey, who has since closed his business. Bellsey, reached by telephone, could not recall the exact details of the booklet, but told Breitbart News that it “sounds like one of our jobs, like I did for [Acton & Dystel] twenty years ago or more.” 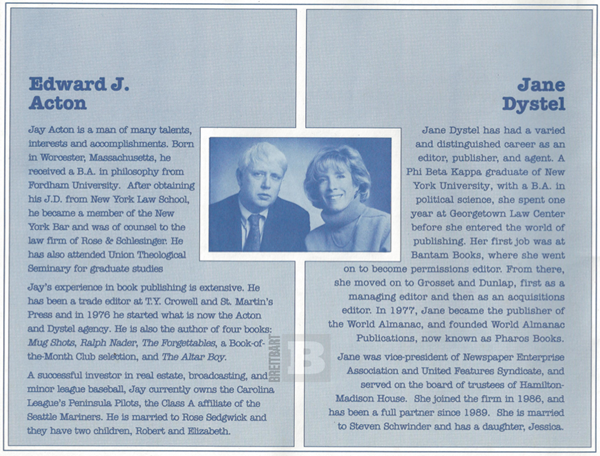 The parade of authors alongside Obama in the booklet includes politicians, such as former Speaker of the House Tip O’Neill; sports legends, such as Joe Montana and Kareem Abdul-Jabbar; and numerous Hollywood celebrities. 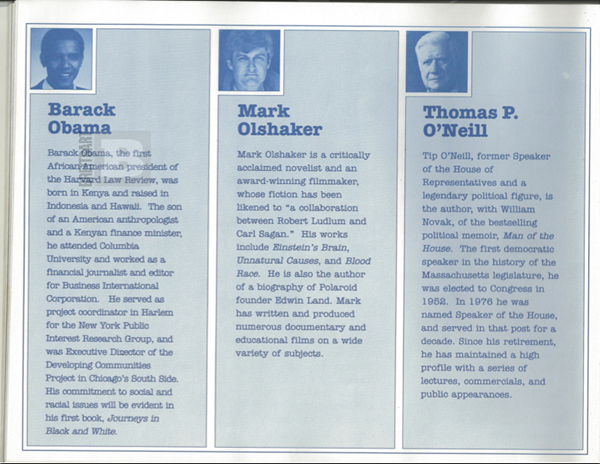 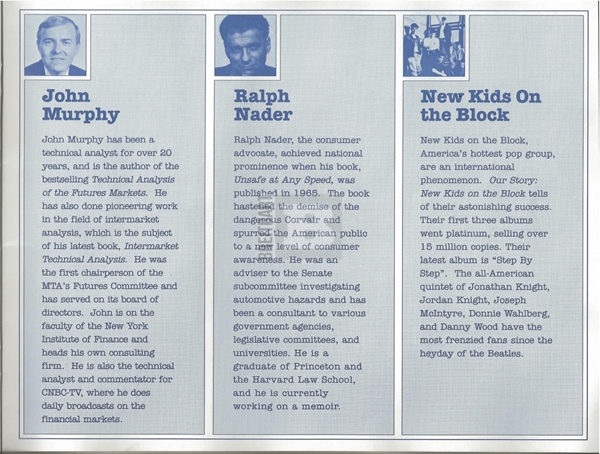 Acton, who spoke to Breitbart News by telephone, confirmed precise details of the booklet and said that it cost the agency tens of thousands of dollars to produce.

He indicated that while “almost nobody” wrote his or her own biography, the non-athletes in the booklet, whom “the agents deal[t] with on a daily basis,” were “probably” approached to approve the text as presented.

Dystel did not respond to numerous requests for comment, via email and telephone. Her assistant told Breitbart News that Dystel “does not answer questions about Obama.”

The errant Obama biography in the Acton & Dystel booklet does not contradict the authenticity of Obama’s birth certificate. Moreover, several contemporaneous accounts of Obama’s background describe Obama as having been born in Hawaii.

The biography does, however, fit a pattern in which Obama–or the people representing and supporting him–manipulate his public persona.

David Maraniss’s forthcoming biography of Obama has reportedly confirmed, for example, that a girlfriend Obama described in Dreams from My Father was, in fact, an amalgam of several separate individuals.

Several weeks later, Obama left Wright’s church–and, according to Edward Klein’s new biography, The Amateur: Barack Obama in the White House, allegedly attempted to persuade Wright not to “do any more public speaking until after the November [2008] election” (51).

Obama has been known frequently to fictionalize aspects of his own life. During his 2008 campaign, for instance, Obama claimed that his dying mother had fought with insurance companies over coverage for her cancer treatments.

That turned out to be untrue, but Obama has repeated the story–which even the Washington Post called “misleading”–in a campaign video for the 2012 election.

The Acton & Dystel biography could also reflect how Obama was seen by his associates, or transitions in his own identity. He is said, for instance, to have cultivated an “international” identity until well into his adulthood, according to Maraniss.

Regardless of the reason for Obama’s odd biography, the Acton & Dystel booklet raises new questions as part of ongoing efforts to understand Barack Obama–who, despite four years in office remains a mystery to many Americans, thanks to the mainstream media.

Larry O’Connor contributed to this report.