In an exclusive interview with Breitbart News, former Harvard Law School Dean Robert C. Clark, the man behind the decision to recruit Elizabeth Warren as a visiting professor and subsequently as a tenured professor, has described the circumstances that led Harvard to offer Warren a permanent position in February 1993. Dean Clark stated that, to the best of his recollection, when the full time tenure offer was made to Warren in February 1993, he was unaware of her Native American ancestry claims. He became aware of them during the two year period subsequent to that offer, and prior to her February 1995 acceptance of the offer.

According to Clark, when the offer was made, it was primarily due to Warren’s teaching and her reputation as a scholar. He added, however, that “her gender may have been in the minds of several members of the faculty. Many thought that hiring more top-ranked women scholars was an important goal of the appointments process.”

As to her claims to Native American heritage, Clark noted:

When I learned of it from her, I thought it was an interesting side note, because my own family lore through my grandfather was that we had a Choctaw ancestor in my own family. But I never verified it and did not claim minority status. A few years later, around 1996 or 1997, I made an offhand comment in an informal get-together with a Native American student group about this Choctaw family lore.  Eventually a law school administrator asked me if I wished to list myself as Native American in some of our EEOC reports, but I politely declined.  It was just family lore, and more importantly, I had no identification whatsoever with the Choctaw community.

Clark continued: “I was focused at the time on persuading Ms. Warren to accept the full time tenured position, an effort at which I was ultimately successful.” 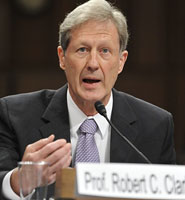 While Clark learned of Warren’s claims to Native American ancestry prior to her final acceptance of a tenured position, in an exclusive interview with Breitbart News, Professor Charles Fried recalls that he did not learn of Ms. Warren’s Native American ancestry claim until a few years after her appointment in 1995. At a dinner party she held at her house, he saw the photo of “a striking woman”–presumably Ms. Warren’s high-cheekboned “Maw Maw.” When Fried brought the photo to Warren’s attention, he says, she casually asserted that, oh yes, she was Indian. She had Indian blood, she told him. Her mother had told her so.

Clark’s statements, when combined with statements by Fried–the man who presented the Appointments Committee’s case on Warren’s behalf to the assembled Law School faculty–raise as many questions as they answer.

Warren first claimed professionally that she was a “woman of color” in the 1986-1987 Association of American Law Schools directory. For the next five years, she repeated those claims loudly and often–in faculty lounges, private dinners, and law conferences across the country.

Dean Clark apparently missed the 1991-1992 AALS directory in which Ms. Warren checked the “woman of color” box, and did not hear from her friend and colleague Jay Westbrook, who was at Harvard Law School as a Visiting Professor for the 1991-1992 academic year, that Warren was a self-proclaimed Native American.  Nor, despite frequent interaction between faculty members, the administration, and the students who worked for the Harvard Women’s Law Journal, was he aware of the pending publication of that journal’s Spring 1993 article, “Women of Color in Legal Academia: A Biographic and Bibliographic Guide” that lists Warren as one of approximately 250 “women of color” in legal academia. (You can see the article here.)

Clark was under terrific political pressure in a very nasty environment to hire more minorities and women to the Harvard Law School faculty that year. On the job for only three years, he had inherited a very ugly situation that quickly escalated into the Derrick Bell controversies. John Sedgwick wrote an article in the February 1993 edition of Esquire magazine, aptly titled “Beirut on the Charles,” that captured the angry divisions within the Law School at that time. The Harvard Crimson reported on February 8, 1993 that the Esquire article “said political tensions on campus had ‘pitted faculty members against faculty members, faculty members against students’ and had seen students ‘waging holy war on one another… [The Law School] is a remarkably gnarled place, with only shades of meaning. It was very difficult for me to ascertain facts,’ Sedgwick said.”

In such a highly politicized environment where “diversity” was the match that could ignite the dry kindling of campus tension at any time, Clark was eager to recruit Elizabeth Warren. If Harvard Law School hired her on a full time tenured basis, it would help solve the pressing political problem that was tearing the school apart: anger directed at the faculty from a very loud and aggressive group of radicalized students demanding more faculty diversity.

In a 2003 Harvard Magazine article which paid tribute to his service as Harvard Law School Dean, Clark described the importance of recruiting during his first years on the job:

Reflecting on his 14-year tenure, ending June 30, as dean of Harvard Law School (HLS), Robert C. Clark discerns three distinct periods. In the first six years, he says, “I was obsessed with getting good appointments to happen, and making the campaign a success.” …[A]s he puts it, appointments–subject to a vote of the entire faculty at HLS–were “deadlocked” when he assumed office in 1989. A professoriate riven by disputes over methodology, ideology, the social context of the law, and diversity could not renew itself… he managed to thaw the gridlock by chairing search committees, insisting on high scholarly and teaching standards, and just spending “a lot of time on task and not being too rigid on any one model” of recruiting.

The “smoking gun” that connects the political activism of the radical students who considered Ms. Warren to be a “woman of color” to her hiring on a full time tenured basis may well be found in the pages of the Harvard Crimson.

On February 5, 1993, former United States Solicitor General and Harvard Law School Professor Charles Fried addressed a meeting of the entire Harvard Law School faculty meeting at Pound Hall for the purpose of voting on candidates for tenured faculty appointments. As a member of the Appointments Committee, Fried had been selected to present that group’s positive recommendation that Visiting Professor Elizabeth Warren should be granted a full time tenured professorship. On their way into the meeting, many of the faculty members had run a gauntlet of about 65 students who had gathered outside the building to participate in a “silent vigil.” The Crimson reported the following day that several of those students said “[t]he vote marks an advance in the student and faculty effort to improve faculty diversity.” 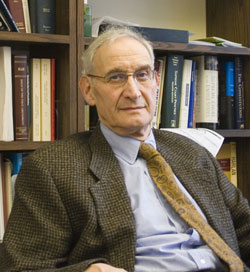 One of those students, Marie-Louise Ramsdale, was well known to Dean Clark as one of his most aggressive and radical student adversaries. She was the managing editor of the Harvard Women’s Law Journal, which had just completed and sent to publication the article described above. She was also the president of the Harvard Law School Council, a member of the Harvard Coalition for Civil Rights, a group that had unsuccessfully sued the law school in the spring of 1992 to force it to hire more minorities. She had also been one of the nine students, known as the “Griswold 9”, who took over the Dean’s office and physically prevented him from entering it on April 6, 1992. 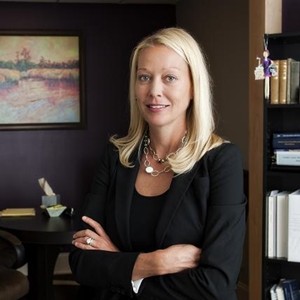 Marie-Louise Ramsdale, now an attorney in South Carolina, spoke to a February 2012 Conference on Diversity at the University of South Carolina 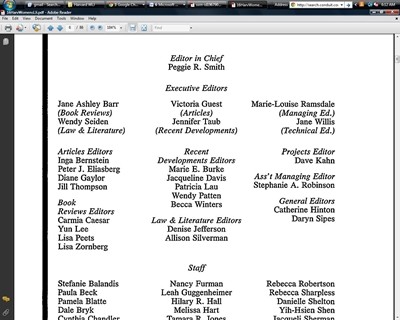 Philip Lee described an eyewitness account of this incident in his 2011 article “The Griswold 9 and Student Activism for Faculty Diversity at Harvard Law School in the Early 1990s,” published in the Harvard Journal of Racial and Ethnic Justice.

When the fall semester of 1992 began at Harvard Law School, Dean Clark had been determined to avoid the bitter clashes of the previous spring. As the Harvard Crimson reported on September 12, 1992:

Taking the initiative after a spring of bitter and emotional conflict, Dean of the Law School Robert C. Clark has appointed a respected professor emeritus to lead a major effort to improve the sense of community on campus.

In a letter distributed last week, Clark sounded a conciliatory note and called on students, faculty and staff to raise the level of civility in the ongoing discussion of race and gender issues.

“The events of last spring were disturbing and difficult for many members of this community,” Clark wrote. “It has become apparent that the ways in which we deal with each other ought to be improved.”

The dean, who was criticized by students and faculty for not responding adequately to the Frugparody, promised to focus on bringing more women onto the faculty. He said the appointments committee will meet periodically with student representatives this fall. [emphasis added]

Clark said the new working group would also include student representatives, and staff members as well.

It was clear to all of the Harvard Law School faculty members sitting in that February 5, 1993 meeting at Pound Hall that Warren’s hiring was something Dean Clark really wanted to accomplish. Many faculty members probably understood that, if they had any objections to the offer of tenure, they should keep those objections to themselves unless they wanted to make this issue the proverbial hill upon which they were prepared to die. Some faculty members that day were probably well aware that part of the package that was Elizabeth Warren included claims of Native American ancestry. Others–like Professor Fried–were not.

That the Harvard Women’s Law Journal included Warren’s claim without verifying its authenticity might be considered by many scholars to be questionable, both on the part of both Warren and the journal. Warren, when apparently given the opportunity to not include herself in the list of 250 “women of color” in legal academia, apparently chose not to do so.

For personal reasons (her children were still in Philadelphia in high school with her husband, University of Pennsylvania Law School Professer Bruce H. Mann), Warren turned down the tenure offer temporarily in April 1993, but Dean Clark made it a standing offer, which she ultimately accepted in the fall of 1995 when all of her children had graduated from high school.

Warren is, by all accounts,  a good teacher. She was voted best teacher and won the Albert A. Sacks-Paul A. Freund Award for Teaching Excellence at Harvard Law School in June 1997, among other recognitions. But there are legions of excellent teachers in law schools across the country who are never even considered for tenure at Harvard Law School, much less extended a “standing offer” of tenure.

Despite statements by Professor Fried lauding her excellent research–as it was known to him in 1992–the incorrect data she apparently confirmed about her own heritage for inclusion in the 1993 Harvard Women’s Law Journal article gives credence to critics such as George Mason University Law Professor Todd Zywicki, who argued that much of her empirical research is suspect and probably riddled with inaccuracies and inconsistencies. Zywicki made that case quite forcefully in his 2010 Wall Street Journal critique of her work, In Elizabeth Warren We Trust?, in which he called Warren “an individual with a track record of using questionable research to advance policy ends” and added: “Concerns about Ms. Warren’s presentation and interpretation of data have been longstanding.”

If the “empirical evidence” Warren used to support her claim of her own Cherokee ancestry–nothing more than her own unsubstantiated “family lore”–was of such a laughable standard that it would cause any serious scholar or genealogist to scoff in derision–what can be said of the standards of empirical evidence used in her other academic publications?

Warren’s stonewalling of the press has been Nixonesque. The most important question for her campaign that remains unanswered to this day is also reminiscent of that period: What did Harvard Law School know about Ms. Warren’s “woman of color” status, and when did they know it?