During Sunday’s Al Punto program on the Spanish-language Univision network, Senator Marco Rubio told interviewers that under the proposed Senate bill, legalization occurs first and is not contingent upon border security.

First comes the legalization. Then come the measures to secure the border. And then comes the process of permanent residence. What we’re talking about here is the system of permanent residence. Regarding the legalization, the enormous majority of my colleagues have accepted that it has to happen and that it has to happen at the same time we begin the measures regarding [border] security. It is not conditional. The legalization is not conditional. [emphasis added]

This is at clearly odds, however, with the recent radio ad by the pro-immigration group Americans for a Conservative Direction. The group, funded by FWD.us (an organization advocating for Silicon Valley priorities and backed by Mark Zuckerberg), was reportedly formed specifically to boost conservative support for immigration reform.

Male voice: Our immigration system is a joke, and the whole world knows it.

Female voice: Our border is unsecure, our laws are unenforced. We don’t know who’s here, what they’re doing or even why.

Male voice: What we have now is a national security nightmare waiting to happen.

Female voice: But conservatives like Marco Rubio and Paul Ryan…

Male voice: …they’re working on plans to change that.

Male voice: Next, deport any illegal immigrant guilty of a serious crime. For the rest, no amnesty, period.

Female voice: If they have a job, if they pay a fine and if they learn English…

Male voice: …they can go to the back of the line with no federal benefits. That means no welfare, no Obamacare — nothing.

Male voice: …and conservatives are working to make it tougher.

Male voice: And that’s the opposite of what we have now.

Female voice: Call Congress. Tell them to fix our broken immigration system. Paid for by Americans for a Conservative Direction. [emphasis added]

Americans for Conservative Direction has made this claim more than once. The group’s debut video ad, released on April 23rd, featured Senator Rubio making his pitch with the subtitle “Gang of 8 Immigration Plan: Establish Border Security First.” 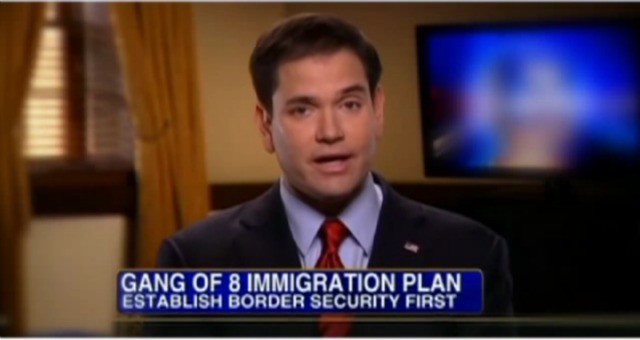 There is no indication that Senator Rubio’s staff, or any “Gang of 8” senator, has publicly corrected or clarified Americans for a Conservative Direction’s statements.