New York Mayor Bill de Blasio will attend and deliver remarks at the funeral of slain NYPD Officer Rafael Ramos Saturday, despite calls by some in law enforcement to stay away.

De Blasio’s office announced his plans in a press release Friday night. The funeral of Wenjian Liu, who was shot execution-style in the same squad car as Ramos on December 20, is still being arranged.

A petition circulated by the NYC Patrolmen’s Benevolent Association president Patrick Lynch almost two weeks ago urged police officers to demand that de Blasio not attend their funerals if they die in the line of duty. 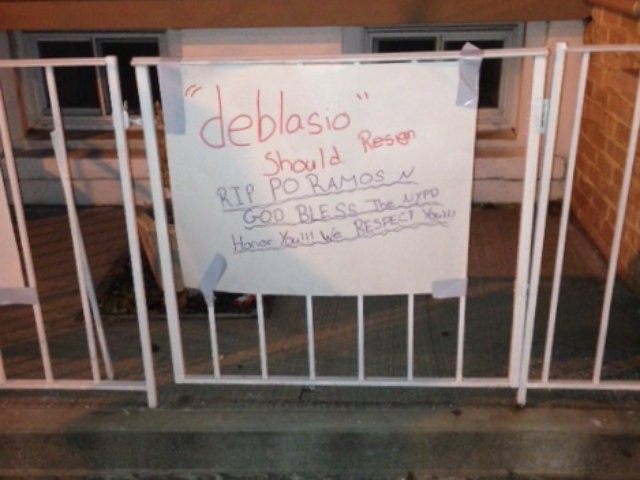 Kerry Picket/Breitbart News: A sign outside of a house on the same street as the church holding a wake for Officer Ramos.

The petition was triggered after de Blasio made remarks in reaction to a Staten Island grand jury decision that did not indict NYPD Officer Daniel Pantaleo for the death of Eric Garner, a man Pantaleo restrained in a headlock during an attempted arrest in July. New York City law enforcement found themselves at odds with the mayor when he said his biracial 17-year old son Dante should be as fearful of the NYPD as the criminals in the city.

Officers turned their backs on de Blasio when he held his first presser on Liu and Ramos’s murder at the hands of 28-year-old Ismaaiyl Brinsley. Retired NYPD discussed ways to block the mayor from showing up to the funeral. More recently, a plane flew over the Hudson River carrying a banner reading: “De Blasio, our backs have turned to you.”

It is unknown if Ramos signed the petition, but according to his Facebook page, The Daily Caller reported, Ramos was critical of the massive anti-police protests that have happened regularly since Garner’s death, calling the action of a CUNY professor at a protest “disgusting.”

The accused professor, Eric Linsker, allegedly hurled a garbage can at police during a protest on the Brooklyn Bridge. He was arrested for assault, among other charges. Ramos also “Liked” on Facebook the Patrolmen’s Benevolent Association.