An analysis by the Wall Street Journal finds that the number of private business owners under the age of 30 has hit a 24-year-low.

“The sharp decline in business ownership among young adults, even when taking into account the aging population, adds to worries about business formation heading into 2015,” reports the Journal. 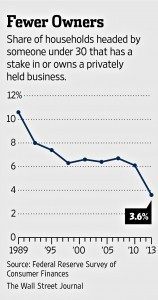 Declining net worths, access to capital due to tighter lending standards by banks, and “stiffer competition in the Internet age” were all cited as possible factors driving young entrepreneurship downward.

Groups like the conservative Young America’s Foundation (YAF) have responded by creating The Center for Entrepreneurship & Free Enterprise, an initiative designed to “reinvigorate the respect for free enterprise that so many around the world can only dream of by reaching young business leaders and budding entrepreneurs.” The program includes seminars and training in free market and business principles, including hearing lectures from speakers like Steve Forbes, Stephen Moore, Dr. Walter Williams, and John Stossel.

Others, like libertarian billionaire Peter Thiel, have created initiatives like the Thiel Fellowship to empower aspiring entrepreneurs even before they enter college. The Thiel Fellowship offers 20 young dreamers $100,000 over two years to not attend college. Fellows instead take immediate action on starting and launching their business endeavors.

Experts say the downturn in young entrepreneurship runs counter to popular notions of tech whiz kids dreaming up the next social media juggernaut in their bedrooms and portends troubling trends if gone unchanged.

“We need startups not only for employment, but also for ideas,” Harvard Business School Professor John Davis told the Journal. “It’s part of the vitality of this country to have people starting new businesses and trying new things.”