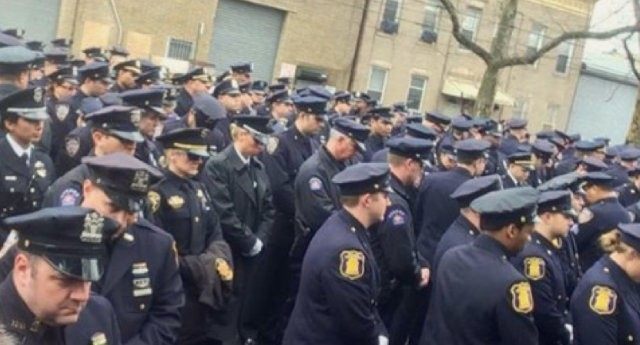 Before the weekend, Police Commissioner Bill Bratton sent a memo to NYPD personnel asking them to not turn their backs at Liu’s funeral like they did during Detective Rafael Ramos’s funeral service two weeks ago.

“I issue no mandates and I make no threats of discipline,” Bratton wrote in a memo. “But I remind you that when you don the uniform of this department, you are bound by the tradition, honor, and decency that go with it.”

Roy Richter, president of the NYPD Captains Endowment Association, wrote in a memo, “In this forum the appropriate protest is not a sign or turning away from mourners, or people the family has asked to speak, but rather cold, steely silence… In the coming days and weeks you will be looked upon by many for guidance, leadership and advice at a time when many of our peers and officers under our care are deeply angry. Unfortunately, but understandably, this anger provided visual displays of back-turning at the funeral of Police Officer Ramos that caused pain for his loved ones.”

The NYPD source said captains, whose promotion depends on a political appointment instead of a test, were placed in the front row for strategic reasons, since most did not turn their backs on the mayor.  The captains were placed in plain view of stationary TV cameras that shot the funeral near the front line.