Americans for Tax Reform (ATR) president Grover Norquist has written a letter to several members of the NRA’s board of directors fervently denying allegations of his ties to Muslim Brotherhood leaders as “conspiracies.”

Norquist is currently facing re-election for his position on the NRA’s board of directors, all while these accusations against him have come under renewed attention—and could dominate discussion of his NRA role in the coming weeks.

In the letter obtained by Breitbart News, Norquist accuses Center for Security Policy (CSP) president Frank Gaffney, a former official in Ronald Reagan’s Pentagon, of being a “stalker” he has had to endure for over a decade. Norquist’s  letter comes as journalist and blogger Lee Stranahan—formerly of Breitbart News, now an independent journalist working for the new media product “Brought To Light”—alleged deeper ties between Norquist and radical Muslims.

“One of the ‘benefits’ of achieving some success in fighting for liberty in the city of Washington D.C. is that some people come to believe you can do anything,” Norquist wrote.

Sadly this includes some sad individuals who convince themselves that you are responsible for their personal failings. I have such a stalker whose conspiracy theory is that I ran the Bush White House and presidency. And that I used my superpowers to one single end. To keep him (Frank Gaffney) from being employed in the Bush Defense Department and from being recognized as this generation’s Winston Churchill.

Norquist accused Gaffney of being someone who “spins conspiracy theories” that he is gay, a Muslim or “responsible for the Bush foreign policy failures.”

“For the record, No. No. and No,” Norquist wrote. “One of his staffers told me I was part of the Russian Jewish Mafia. (Also no, but I think that would pay better.)”

Norquist went on to write that he understands that “one of the followers of my stalker” sent the board members of the NRA an email detailing some concerns with Norquist’s ties to Islamists.

“I know that this nonsense would not confuse you about my real work in life, but I certainly wish to make it easy for you to deal with anyone who might be confused by this nonsense,” Norquist wrote.

Several thoughts. The stalker has been pushing this line for 15 years now. Every major newspaper and magazine was approached and found his thesis beneath contempt. Most didn’t dignify it with an article. The Washington Jewish Week did a two part series debunking the conspiracy theories. The Bush White House had a one sentence response: “There is no there there.” The fellow pushing this met for hours with former NRA board member and lawyer Cleta Mitchell. Having examined his entire spiel, she has been public in denouncing it as dishonest nonsense. The Weyrich meeting, a weekly conservative group expelled Mr. Gaffney from their meeting because of his attacks on me and others. The American Conservative Union board of directors condemned his efforts as dishonest. Years ago this fellow unloaded his conspiracy theory on our fellow board member David Keene. David was not impressed.

Norquist wrapped up his letter to his fellow NRA board members by arguing that this issue has “risen to a new level” because “one of Gaffney’s folks has sent out my wife and daughters pictures on twitter.”

What Norquist is referring to here is the report that Stranahan first made on a podcast called “Brought to Light” and since published on that group’s website.

“We reveal that powerful Republican insider Grover Norquist has close, previously unreported, ties to Palestinian anti-Israel activists,” Stranahan says to open the broadcast. “We’ll show you that Norquist has professional and family connections that stretch back decades that have been unknown until now because Norquist himself appears to have kept them quiet.”

Stranahan walked listeners through what had previously been reported about Norquist’s ties to Islamists and how he founded the Islamic Free Market Institute—Islamic Institute for short—with Khaled Saffuri. “But, Brought To Light can now reveal there is another co-founder of the Islamic Institute, one who has never been reported on before, a man named Majed Tomeh,” Stranahan said.

He described Tomeh’s background as a “longtime Palestinian activist” who, when attending Harvard Business School in the 1980s, served as the coordinator of the American Arab Anti-Discrimination Committee (ADC) in Boston. Stranahan asserted that Tomeh is a third co-founder of Norquist’s organization.

Tomeh appears to have claimed this himself in his bio at the end of an article he wrote for the Andover Bulletin, the magazine for his alma mater Phillips Academy.

Tomeh purportedly writes of himself: “In 1998, he co-founded the Islamic Institute in Washington, D.C., which has been at the forefront of President Bush’s interaction with America’s Muslim community.”

“Why has Majed Tomeh never been mentioned as a co-founder of the Islamic Institute?” Stranahan asked. “That’s a question that becomes much more interesting when you learn that Majed Tomeh is also Grover Norquist’s brother-in-law, who was married to Norquist’s sister years prior to the founding of the Islamic Institute in 1998. This means that the unrevealed connection between Norquist and anti-Israel Palestinian activism goes much deeper than anyone had previously suspected.”

Norquist’s sister Loraine and her husband Majed Tomeh attended Harvard Business School together in the mid-1980s. Stranahan reports that Tomeh has publicly sided with Hamas in many separate acts of activism, including a petition he signed criticizing the Palestinian Authority for jailing Palestinian citizens who criticized the government as being too weak against Israel in the Oslo Accords.

“In 2009, Majed Tomeh wrote a letter to the Nation magazine that said in part, ‘it is time for Americans to wake up to the crimes being committed with our political and military support and our money,’” Stranahan said, quoting from Tomeh’s letter. “Grover Norquist’s business associate and brother-in-law was referring to United States support for Israel,” he stated.

Majed’s and Loraine’s daughter, Alina Tomeh, Stranahan said, attends Smith College in Northampton, Massachusetts. “She’s continued the family tradition of Palestinian activism,” Stranahan claimed. “Alina Tomeh is the president and chairperson of Students for Justice In Palestine. The daughter of the co-founder of the Islamic Institute—and Grover Norquist’s niece—Alina Tomeh has been an active coordinator of events at the Massachusetts women’s college, such as their annual Israel Apartheid Week, where she spoke about the three months she spent on the West Bank and in Gaza.” 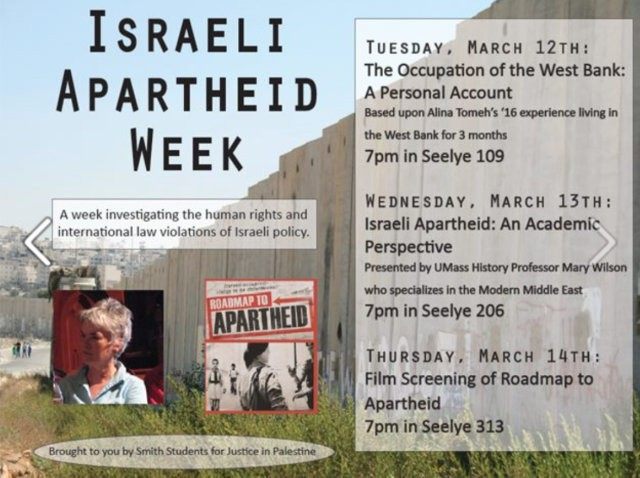 “While it’s been widely reported that Grover Norquist married a Palestinian Muslim named Samah Alrayyes in 2004, what has gone unreported so far is the other family connections to Palestinian activism there,” Stranahan said. “On Samah’s side, both of Norquist’s wife’s sisters, Sahar and Sarah, live in Chicago and are Palestinian activists who have taken numerous trips to Gaza and the West Bank. These trips were connected with a group called the Palestine Children’s Relief Fund. Sahar, a dentist, is also the treasurer of the Chicago chapter of the Palestine Children’s Relief Fund. The entire Norquist family comes together on a page showing pledges for a Chicago marathon run a couple years ago that Sahar and Sarah ran where they called themselves ‘Team Palestine.’ One of the pledges came from the Tomeh family and lists Majed, Loraine and their daughters. Other pledges came from Norquist’s parents, and someone listed as ‘Salwa Alrayyes and the Norquist family.’ Another indicator of the personal relationships involved here is that another person pledging to Sahar and Sarah’s ‘Team Palestine’ marathon run was Grover Norquist’s co-founder at the Islamic Institute, Khaled Saffuri.”

This report from Stranahan appears to be the cause of Norquist’s letter defending himself to his fellow NRA board members.

“There have over the years been death threats from hopefully harmless idiots who follow Gaffney,” Norquist wrote. “The authorities have followed up on ones that pass their threshold of specificity. My goal is to respond to any real concern any real person has without exciting the crazies. They feed on attention as it makes them think they are not nuts.”

Gaffney responded to Norquist in a letter of his own to the NRA’s executive vice president Wayne LaPierre on Wednesday, a copy of which was also obtained by Breitbart News.

“As you know, they [NRA board members] received recently a letter from one of their colleagues, Grover Norquist, in which he makes a number of false representations that require correction,” Gaffney wrote to LaPierre. “That is especially the case as Mr. Norquist is currently standing for reelection to the Board and the information he seems determined to conceal should be known by — and of concern to — every member of the NRA.”

The things Gaffney says Norquist got wrong in his letter are the allegations that Gaffney said Norquist is a Muslim, gay, and responsible for Bush’s foreign policy failures.

“Specifically, Mr. Norquist attempts to mislead you and other NRA Directors about the nature of his record and conduct about which I have been warning for many years,” Gaffney wrote. “The issue is not, as he claims, that he ‘ran the Bush White House and presidency.’ Rather, the problem is that he helped Muslim Brotherhood operatives gain access to and influence over the George W. Bush campaign and administration to the detriment of the President’s conduct of the ‘War on Terrorism’ and the national security.”

Gaffney provided LaPierre with a link to “the dossier in its entirety” so he can personally review it as well.

In addition to that, Gaffney provided a summary of the details of the case against Norquist in his letter to LaPierre.

“The facts are the facts,” Gaffney wrote. “Grover Norquist has served as an agent of influence for assorted Islamic supremacists since 1998 when he began taking at least $20,000 in seed money from a top Muslim Brotherhood operative and al Qaeda financier named Abdurahman Alamoudi to start the Islamic Free Market Institute. The Institute’s transparent purpose was to afford Alamoudi and his fellow jihadists a vehicle for penetrating and subverting the conservative movement and Republican Party.”

“The good news is that Alamoudi was subsequently arrested, tried, convicted and sentenced to 23 years in federal prison on terrorism charges,” Gaffney wrote. “The bad news is that Mr. Norquist has continued to use his various organizations and affiliations — including his membership on the board of the National Rifle Association — to deflect attention from such facts, pretend they do not exist or mislead the unwitting about them.”

Gaffney also offered to personally brief members of the NRA’s board of directors on these matters so the truth about Norquist can get out to them—and the public, and the NRA’s membership—before the board votes on whether to affirm Norquist’s reelection.