The head coach of an Indiana high school girl’s golf team has been suspended after apparently threatening to burn down a Christian-owned pizzeria.

Jess Dooley, a coach at Concord High School of Elkhart, Indiana allegedly struck out at the owner of Memories Pizza in Walkerton, IN who made news on Tuesday by saying that she would not cater a wedding if a gay couple tried to hire her for the job, after the state passed its own Religious Freedom Restoration Act.

“We are a Christian establishment,” pizza shop owner told the media.

On the heels of the news from the pizza shop, coach Dooley allegedly took to Twitter to say, “Who’s going to Walkerton, IN to burn down #memoriespizza w me? Agree with #FreedomofReligion bill? “That’s a lifestyle they CHOOSE” Ignorant.” 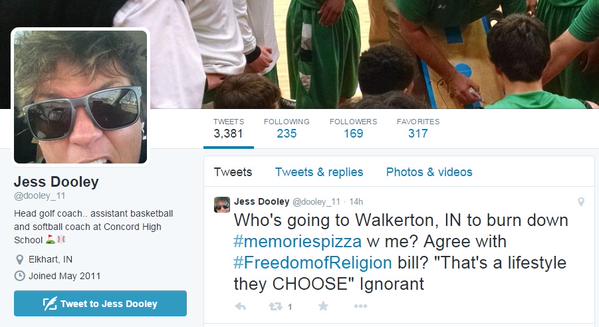 By Wednesday, the school had reported that the coach was suspended pending an investigation of her comments.