One of the remaining questions in the Germanwings plane crash concerns the timing of the co-pilot’s decision to commit mass murder/suicide. Andreas Lubitz needed to lock the captain out of the cockpit to put his plan into motion. What would have happened if Captain Patrick Sondheimer did not have to use the bathroom?

There are rumors bubbling through German media that investigators might have found the answer to that question. According to these reports, as yet unconfirmed by the French or German governments, Lubitz did some Internet research into diuretic drugs before the flight. This suggests he might have spiked Captain Sondheimer’s coffee with a drug that guaranteed he would need to urinate.

That is a good deal of speculation, to be sure, but it would be a coldly logical way for Lubitz to hedge his bets. If it proves out—perhaps with German investigators finding proof that Lubitz purchased diuretic drugs before the flight—it would add to the evidence that his actions aboard Germanwings Flight 9525 were planned in advance.

There is already a fairly high mountain of evidence. The UK Daily Mail reports that Lubitz did his preflight online research into suicide and depression under the pseudonym “Skydevil,” which frankly sounds like the sort of username many eager young pilots would choose, but looks incredibly sinister in retrospect.

In the course of reporting the diuretic rumor, 9News in Australia notes, “there have been growing calls for the heroic efforts Mr. Sondheimer made to try to avert the crashed to be recognized.”

The captain has been somewhat overlooked in the obsessive focus on Lubitz, the reasons for his horrific actions, and the tragic failure of airline security programs to detect the co-pilot’s mental instability. However, the cockpit audio recording provides an enduring testament to Sondheimer’s determination to save the plane, as he can be heard trying to smash back into the cockpit and crying to Lubitz, “For God’s sake, open the door!”

9News observes that Sondheimer “was a father of two, who was only working on the doomed flight because he had changed his roster to work shorter-haul flights so he could spend more time with his family.” He leaves behind a six-year-old daughter and a three-year-old son.

The first photos of Sondheimer were released to the public just a few days ago.  It actually comes from a picture of a shrine at the Dusseldorf airport created in memory of the flight crew, which also includes a framed photo of Lubitz, having been assembled before it became clear Lubitz crashed the plane. Captain Sondheimer is the first photo on the left. Lubitz is the photo next to his. 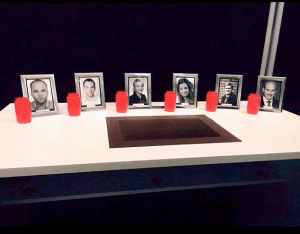 The UK Daily Mail refers to Sondheimer as the “hero pilot” of the flight, quoting the words of his mother from a tribute event in his hometown: “He died a hero but he still died, and we are devastated. The light has gone out of our lives. I am too upset to say any more.”

Sondheimer’s grandmother, however, had a bit more to say: “My grandson is dead, and all because of an idiot who did this to his whole flight and killed so many people.”