A hand-written page of notes dating to 1994 shows that Hillary Clinton planned to use the same pitch for health reform which would later be dubbed the Lie of the Year after President Obama adopted it to sell Obamacare.

The 21-year-old memo is like a glimpse of the embryonic form of one of the most breathtaking political lies of the Obama era. Under a heading which reads, “Elements of reassurance,” an unidentified staffer wrote, “If you like your Blue Cross you can keep your BC.” And below that a note extending this claim to Aetna, Prudential, and any similar insurer. 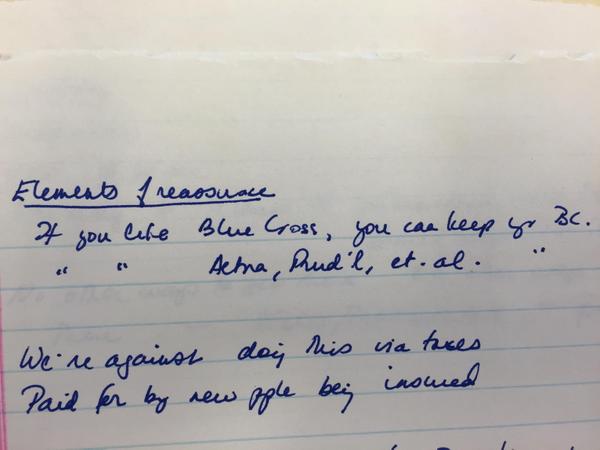 A closeup image of the memo was published on Twitter by Wall Street Journal author Rebecca Ballhaus. The memo itself was released by the Clinton Library this week and published Friday by the Journal.

The document was discovered in a folder containing papers belonging to Clinton speechwriter Noa Meyer. However, the document itself does not identify its author.

President Obama repeatedly used a very similar phrase to the one found in the Clinton document when pitching his own health reform effort. Obama told Americans, “If you like your plan, you can keep your plan” (or some variation) more than three dozen times. That turned out not to be true. In fact, the administration knew for years in advance it was not true. The media gradually caught on, and fact-checkers eventually labeled it the Lie of the Year in 2013.