ADDISON, Texas — Former Gov. Rick Perry (R-TX) is well-known for his proud Texas swagger, but the launch of his presidential campaign was an all-American affair, featuring military heroes and even an American flag that was too big to fit in an airplane hangar.

Perry previously ran for president in 2012, entering the race as a top contender but plummeting in the polls after a series of debate miscues, exacerbated by his recovery from back surgery and short time to prepare for the campaign. As Breitbart News reported, this time around, Perry’s supporters describe him as in top form, mentally and physically, having spent the past few years engaged in serious study with a group of respected policy advisers.

Perry’s efforts seemed to have paid off Thursday, as he delivered a confident speech with strong populist and patriotic overtones to an enthusiastic crowd filled with supporters of all ages, including many veterans and students from Perry’s alma mater, Texas A&M University wearing “Aggies for Perry” shirts.

“It’s an exciting day for the country,” Perry campaign manager Jeff Miller told Breitbart News. “Someone who has a stronger track record than anyone else potentially in the field, that has the potential to do for the country what he did for Texas.” 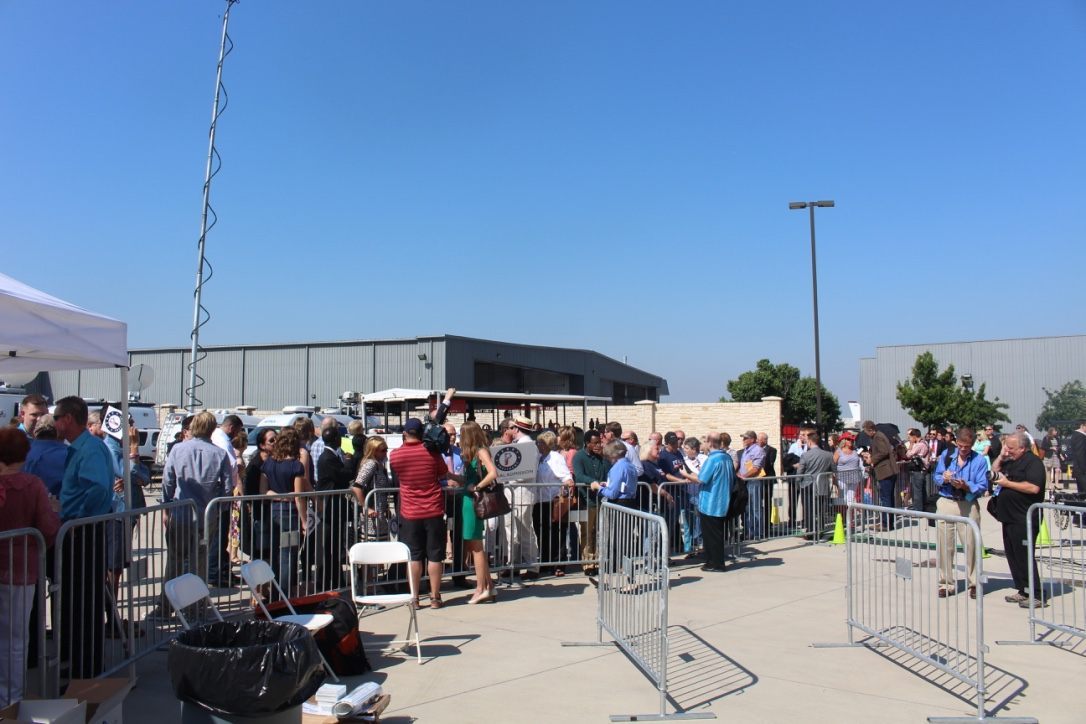 Supporters lining up outside a hangar at the Addison Airport, braving the sunny mid-90s weather. Photo by Cassi Pollock. 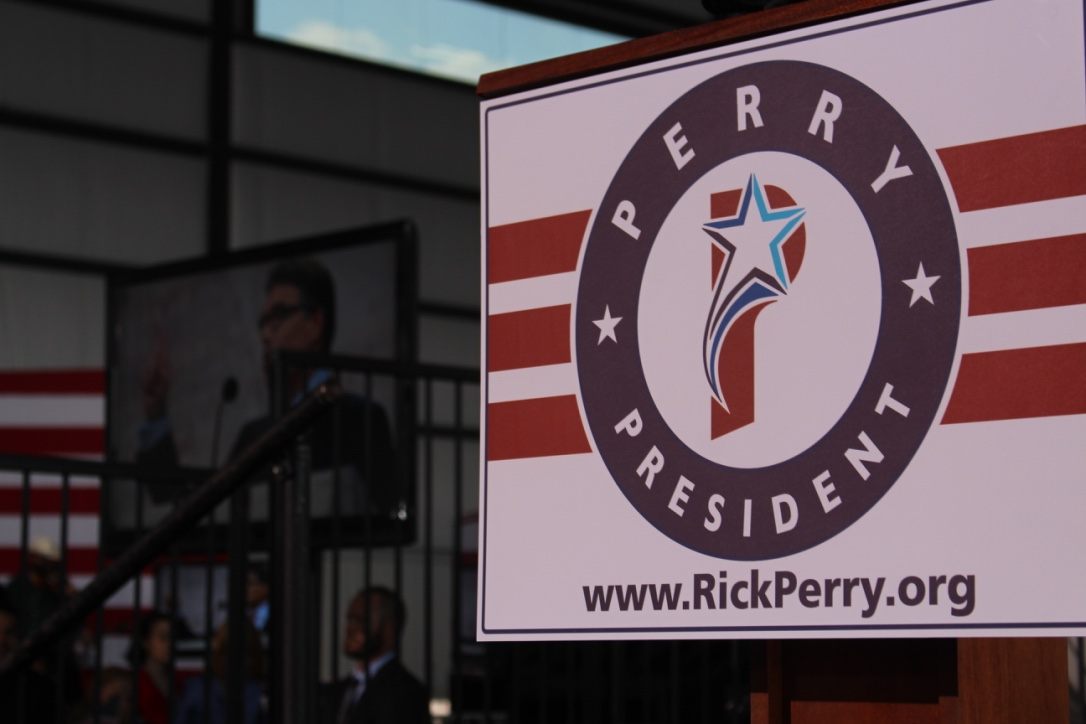 Stage where Perry would later deliver his announcement speech. Photo by Cassi Pollock. 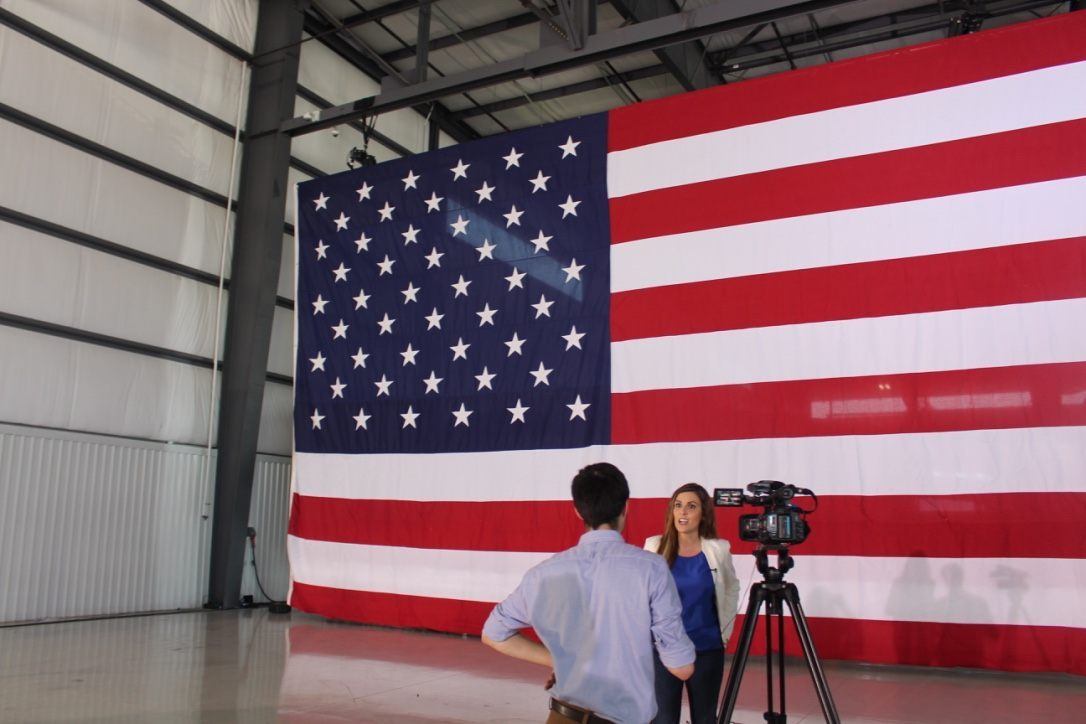 Taya Kyle being interviewed in front of a giant American flag. She later was interviewed by Breitbart News’ Sarah Rumpf. Photo by Cassi Pollock. 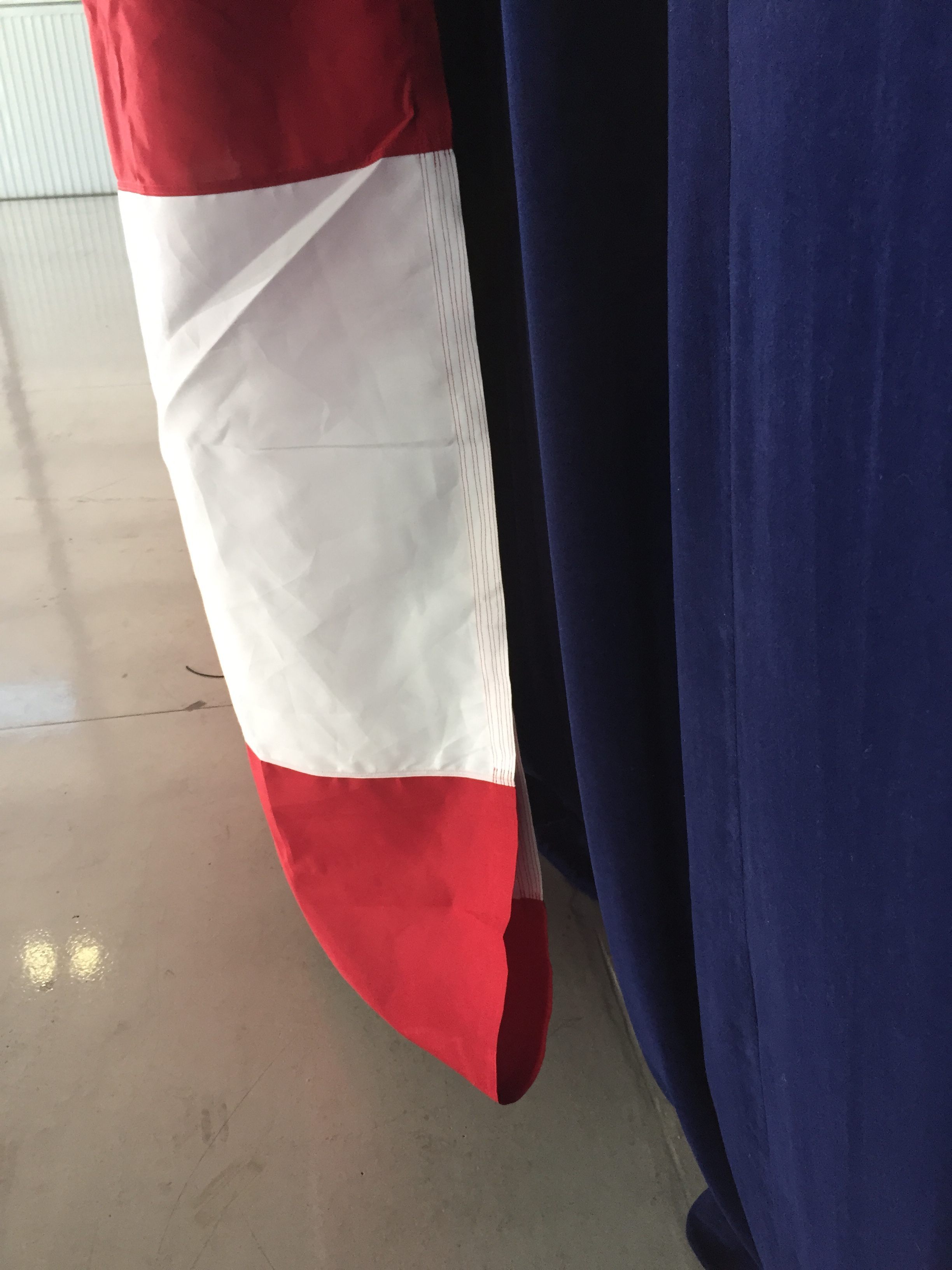 Everything really is bigger in Texas. After posting several photos of the giant American flag on Twitter, multiple people commented that the flag was “missing stripes.” What happened was that the Perry campaign somehow found a flag that was too big for even an airport hangar. The flag was hung from the top support beam and then the bottom edge folded up to avoid touching the ground. Photo by Sarah Rumpf. 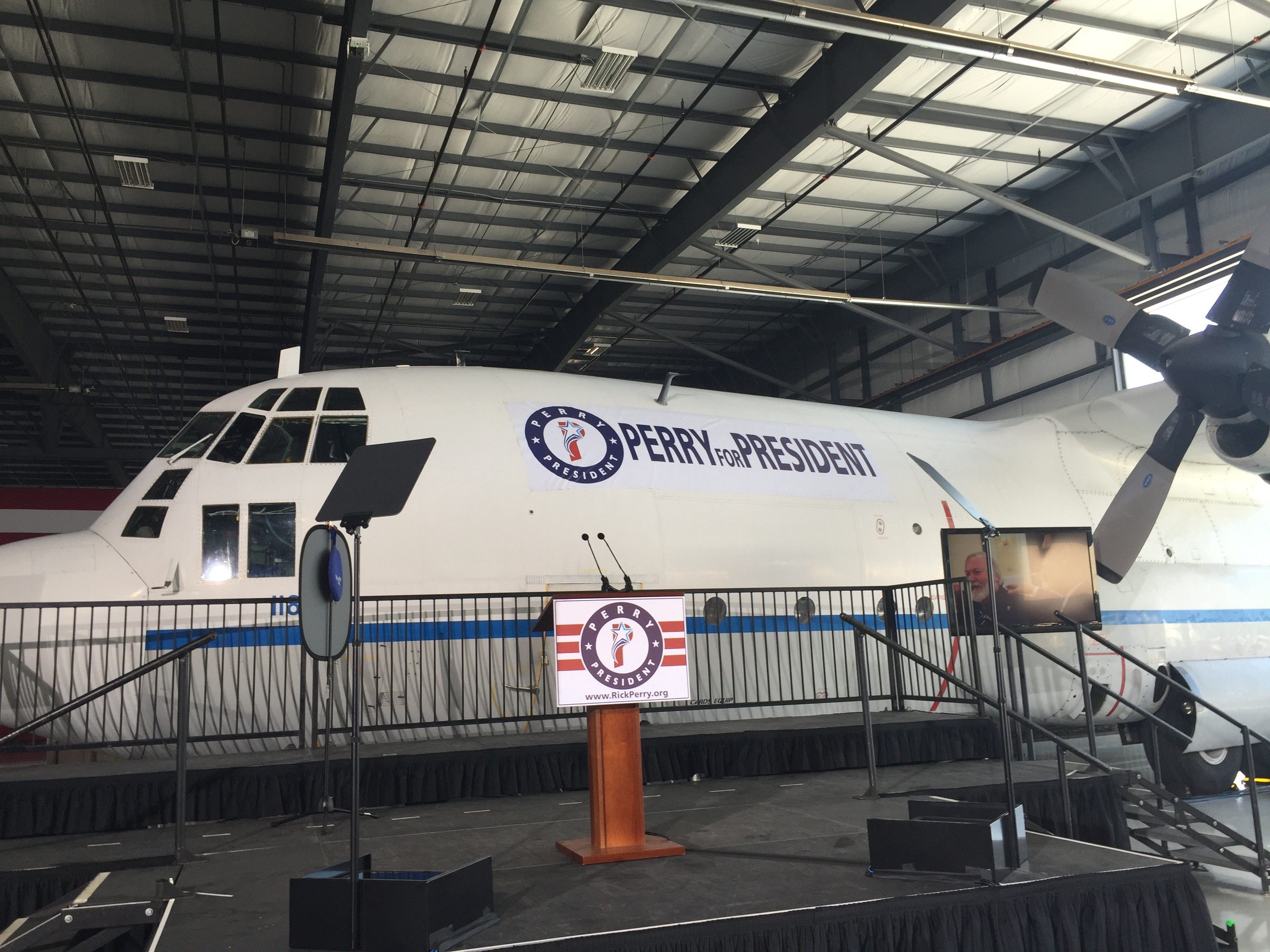 The airplane behind the stage was a C-130, the same kind that Gov. Perry flew while serving as a Captain in the United States Air Force. From 1972-1977, Perry flew missions over Europe and the Middle East. Photo by Sarah Rumpf. 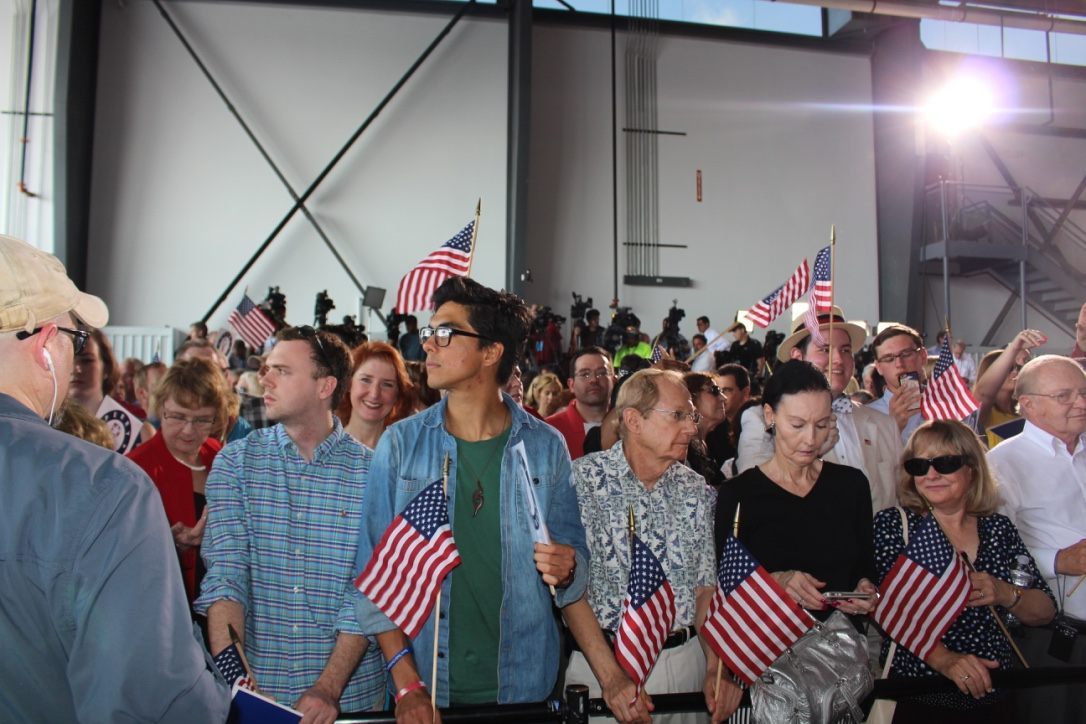 Supporters fill the hangar at the Addison Airport. Photo by Cassi Pollock. 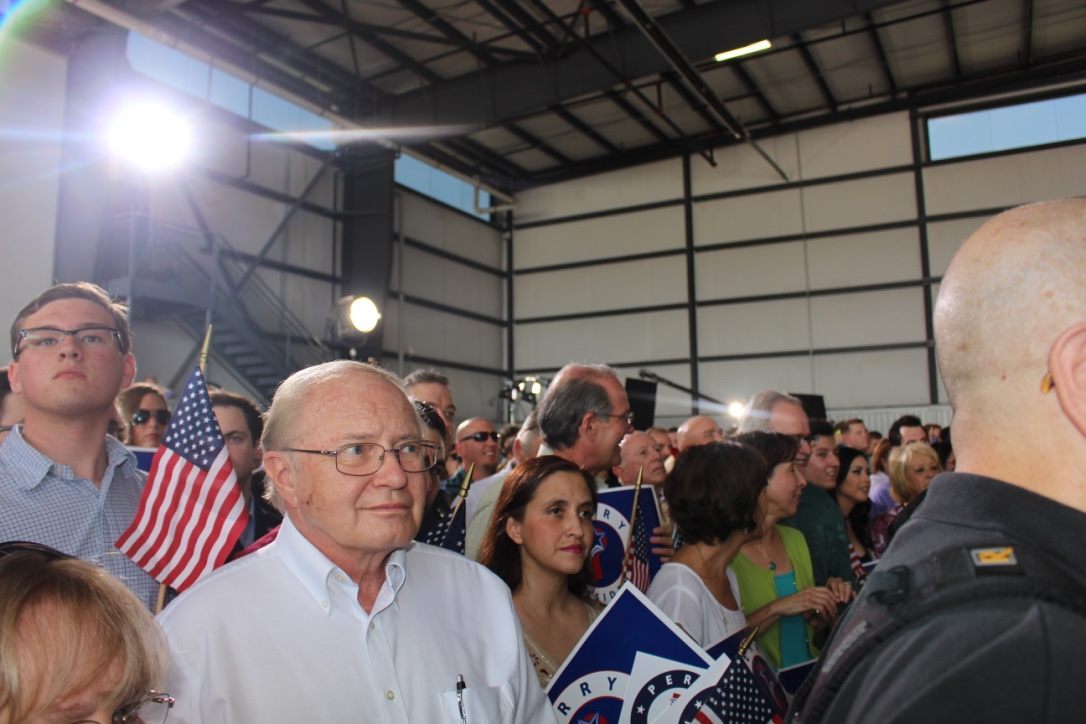 The crowd included Texans of all ages, and many military veterans. Photo by Cassi Pollock. 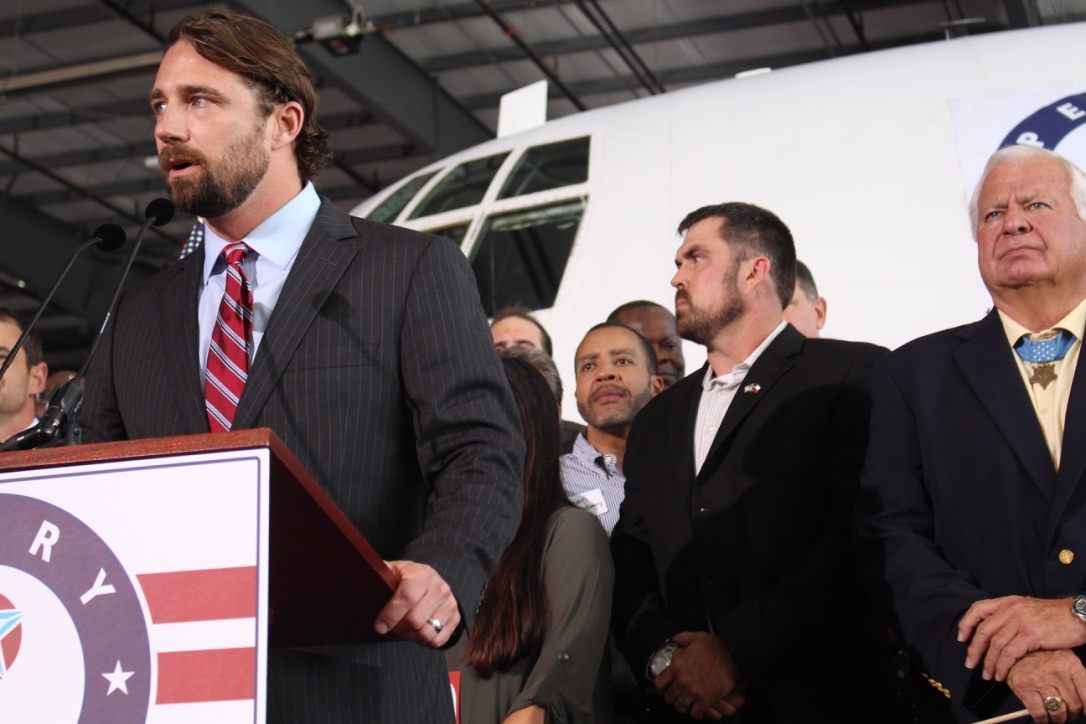 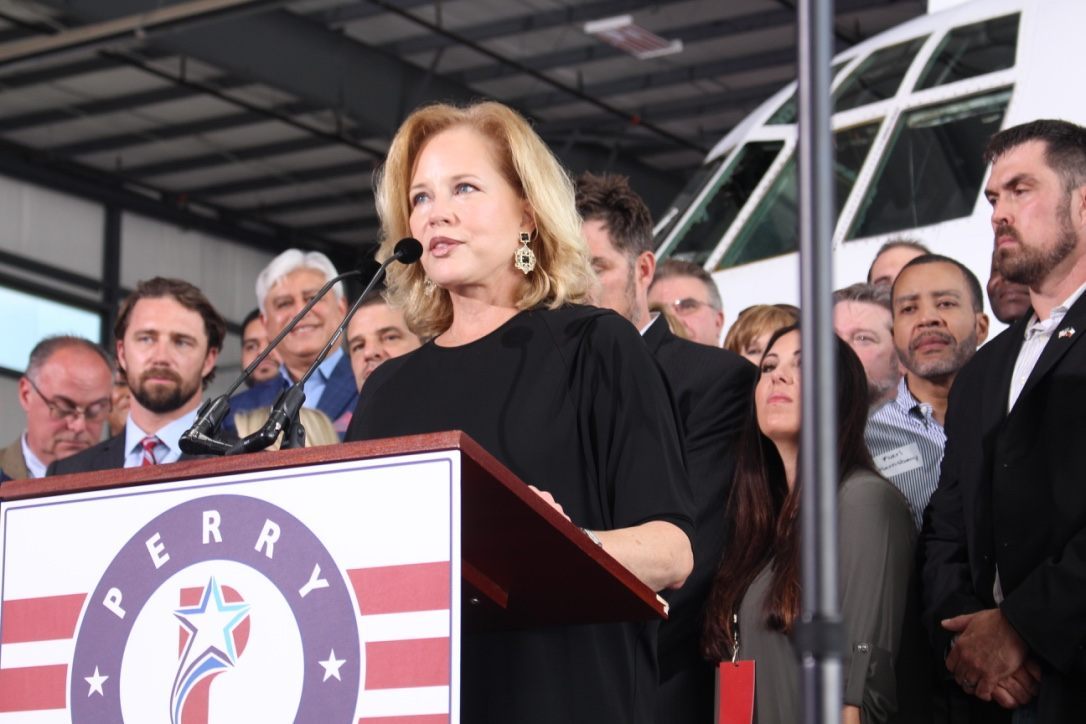 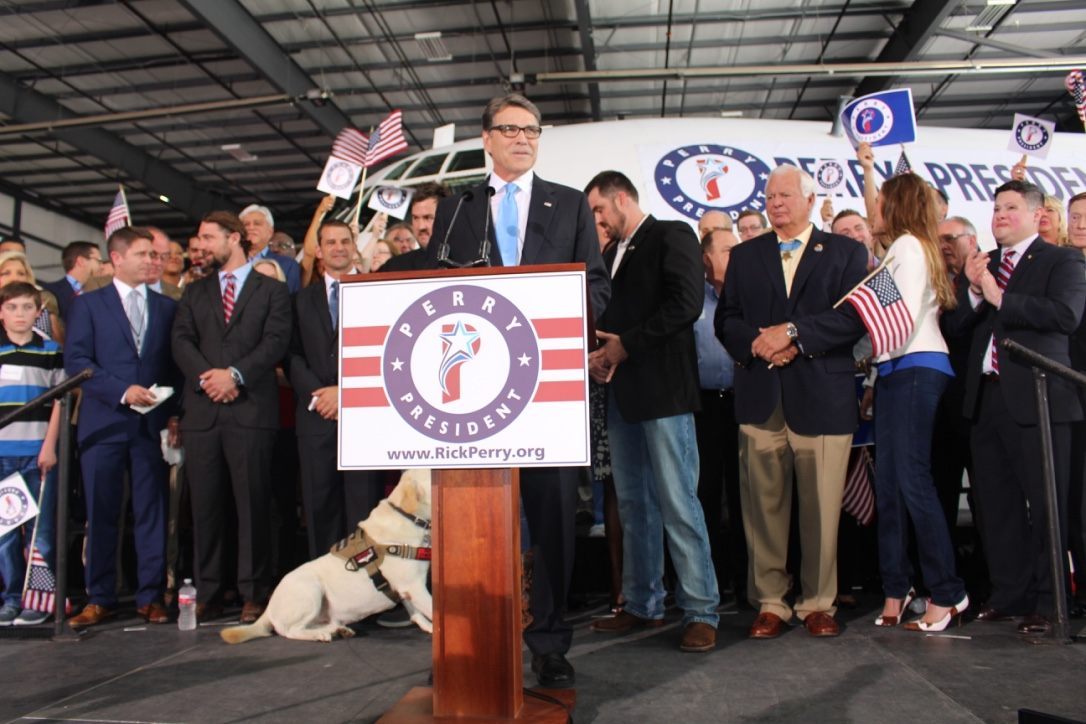 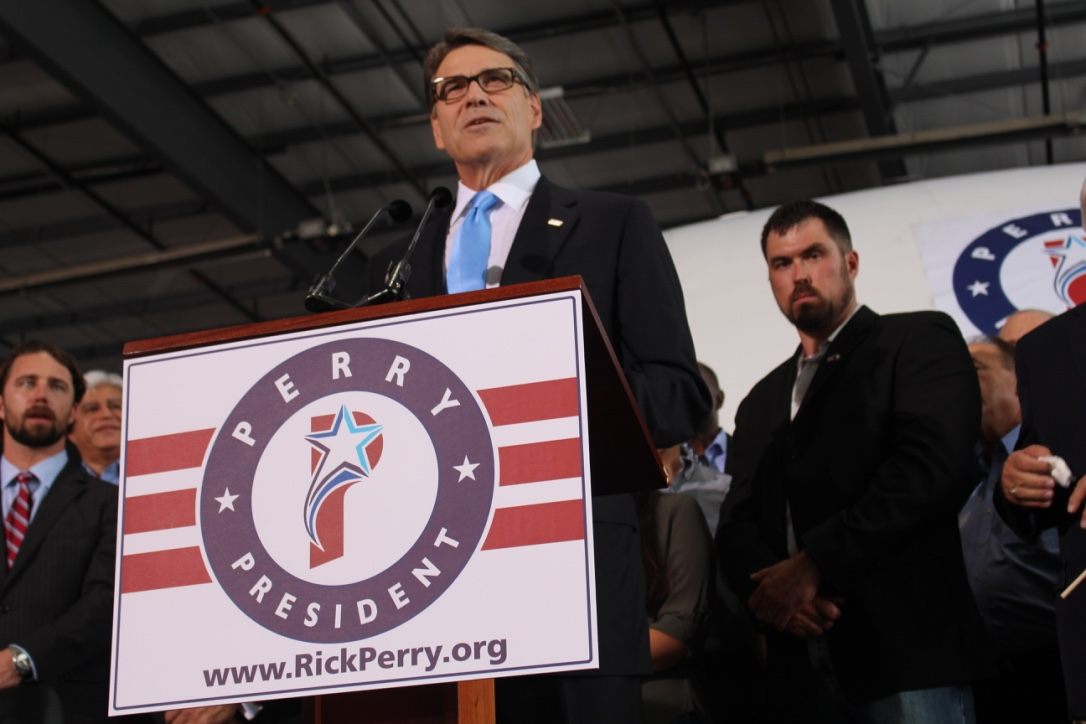 Gov. Perry makes his announcement speech as Morgan Luttrell keeps watch to his left. Morgan’s twin brother, Marcus Luttrell, is just out of sight to Perry’s right. Several observers on social media remarked on the Luttrells’ serious expressions, mistaking them for bodyguards. To this Texas crowd, however, they were well known. Photo by Cassi Pollock. 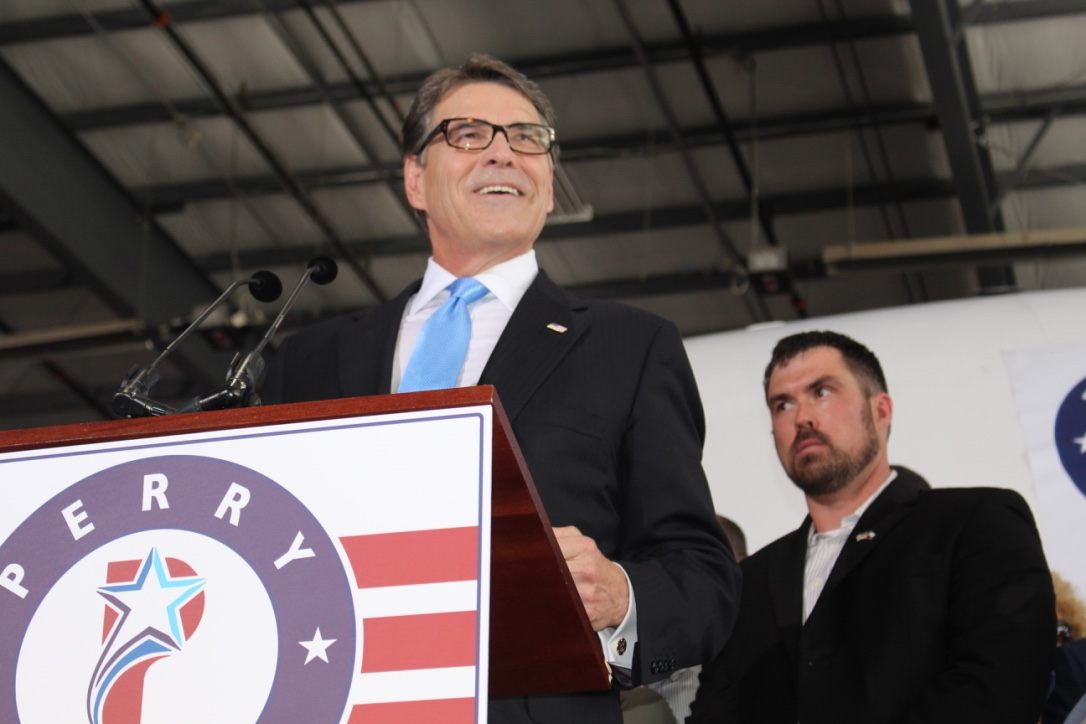 “We have the power to make things new again. To project American strength again, to get our economy going again,” said Gov. Perry, “and that is why today I am running for the presidency of the United States of America.” Photo by Cassi Pollock. 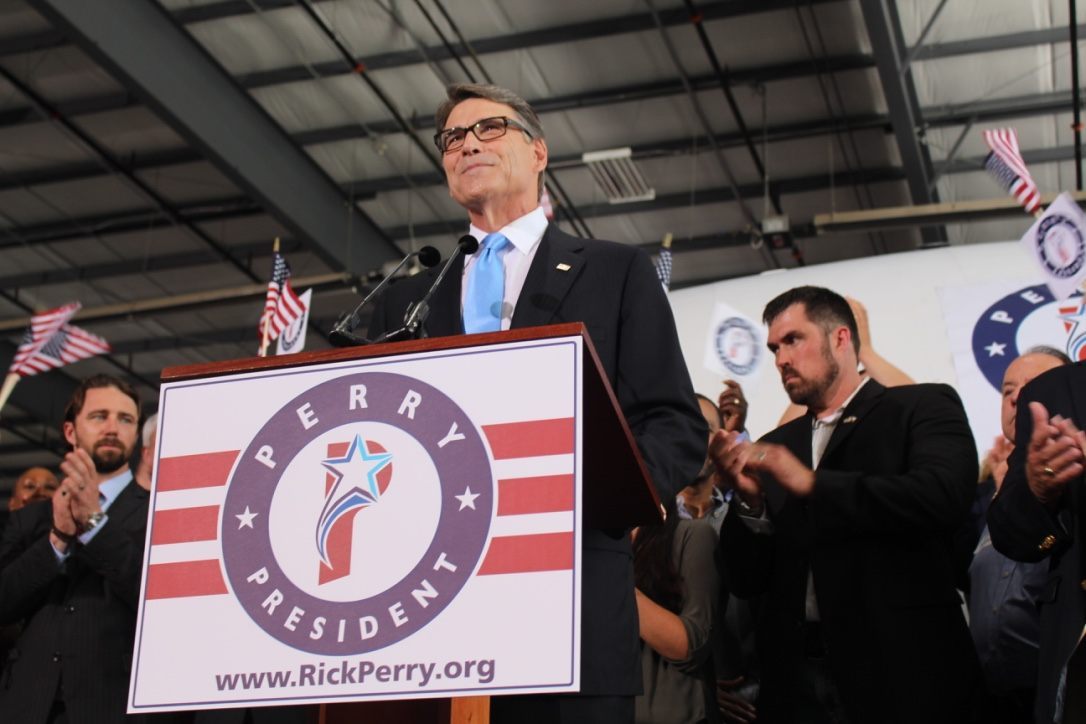 “I come here today to say your voice is heard,” said Gov. Perry. “I hear you, you are not forgotten. I am running to be your president.” Photo by Cassi Pollock. 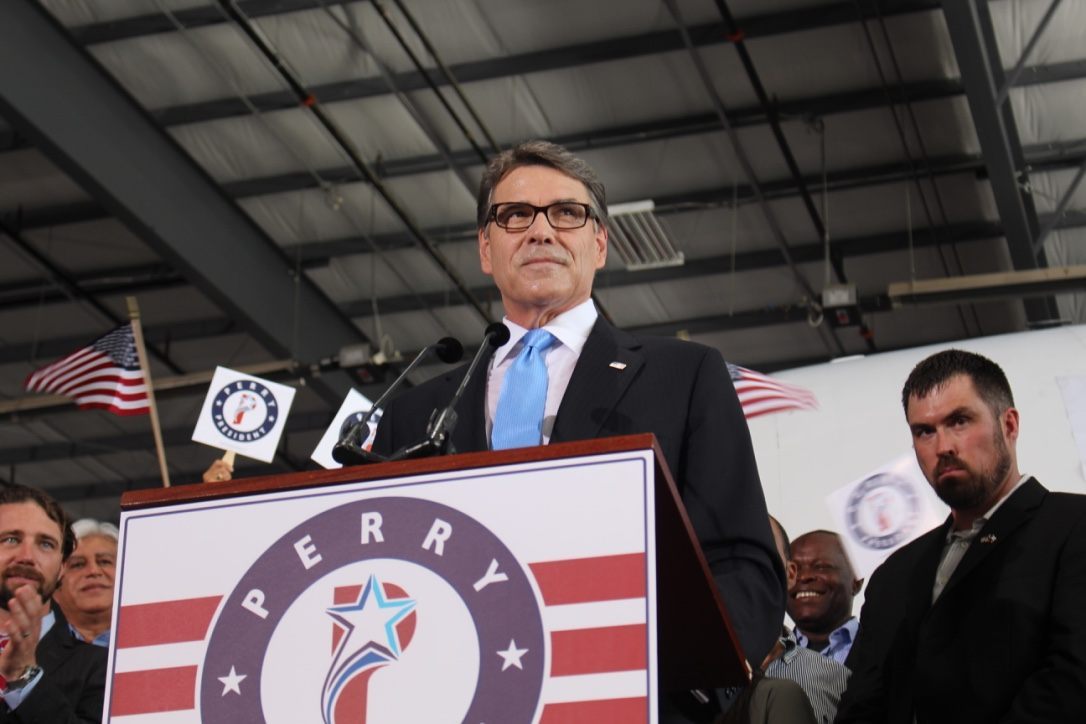 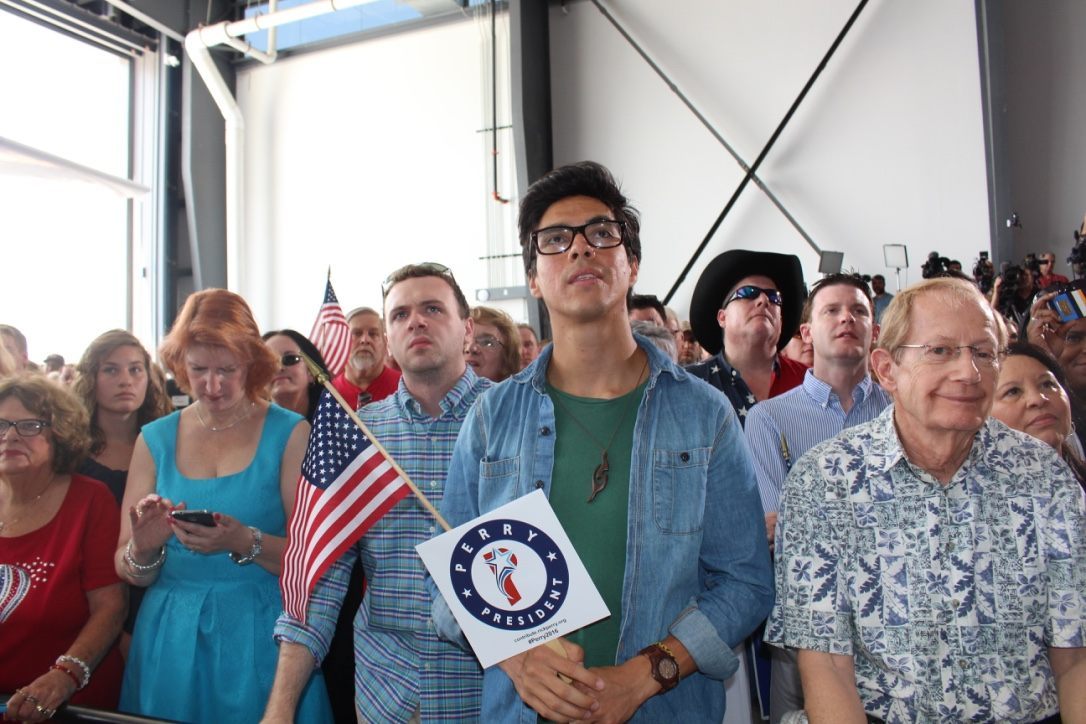 Fans with Perry’s new campaign logo were passed out to help keep the crowd cool in the Texas heat. Photo by Cassi Pollock. 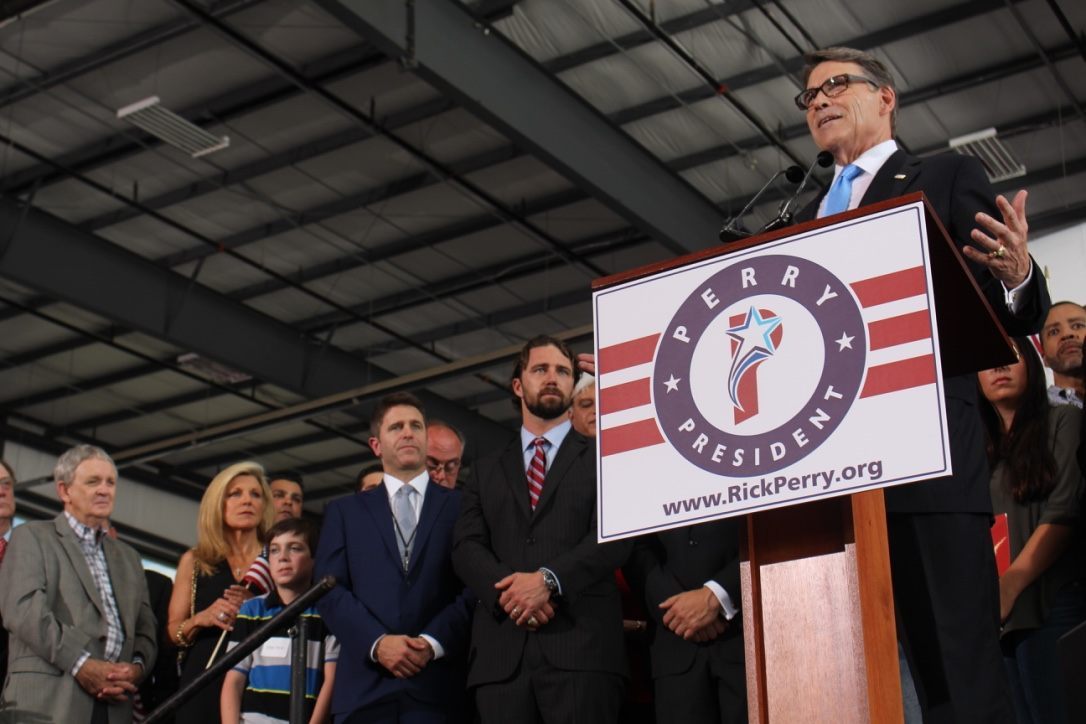 “The reason I am running for president is I know for certain our country’s best days lie ahead. There is nothing wrong in America today that cannot be fixed with new leadership,” said Gov. Perry. “We are just a few good decisions away from unleashing economic growth, and reviving the American Dream.” Photo by Cassi Pollock. 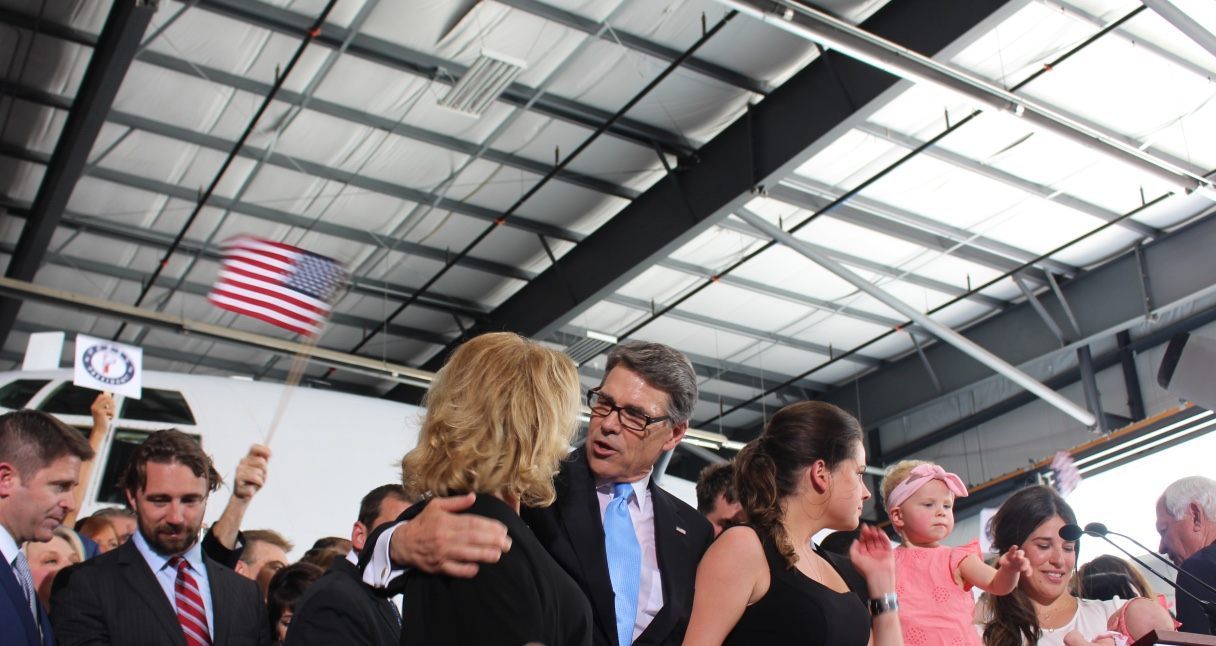 Gov. Perry hugs his wife, Anita, after his speech. Photo by Cassi Pollock. 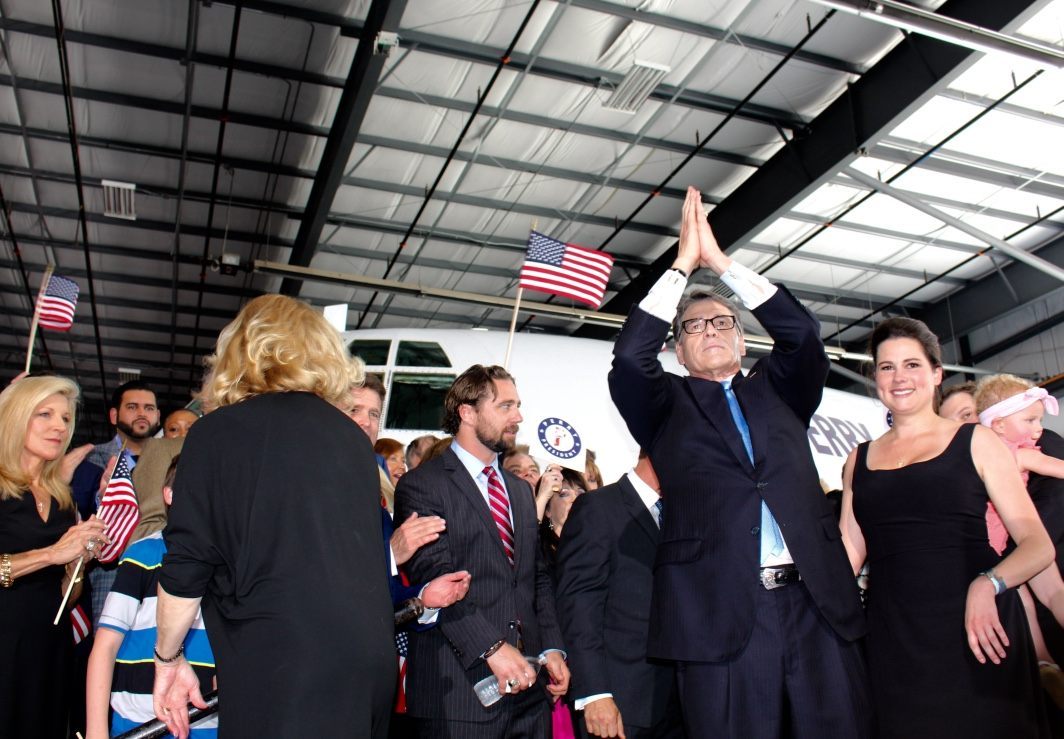 Gov. Perry claps along with the crowd, or perhaps shows his appreciation for Jimmy Buffett’s music? (“Fins to the left, fins to the right…”) Photo by Cassi Pollock. 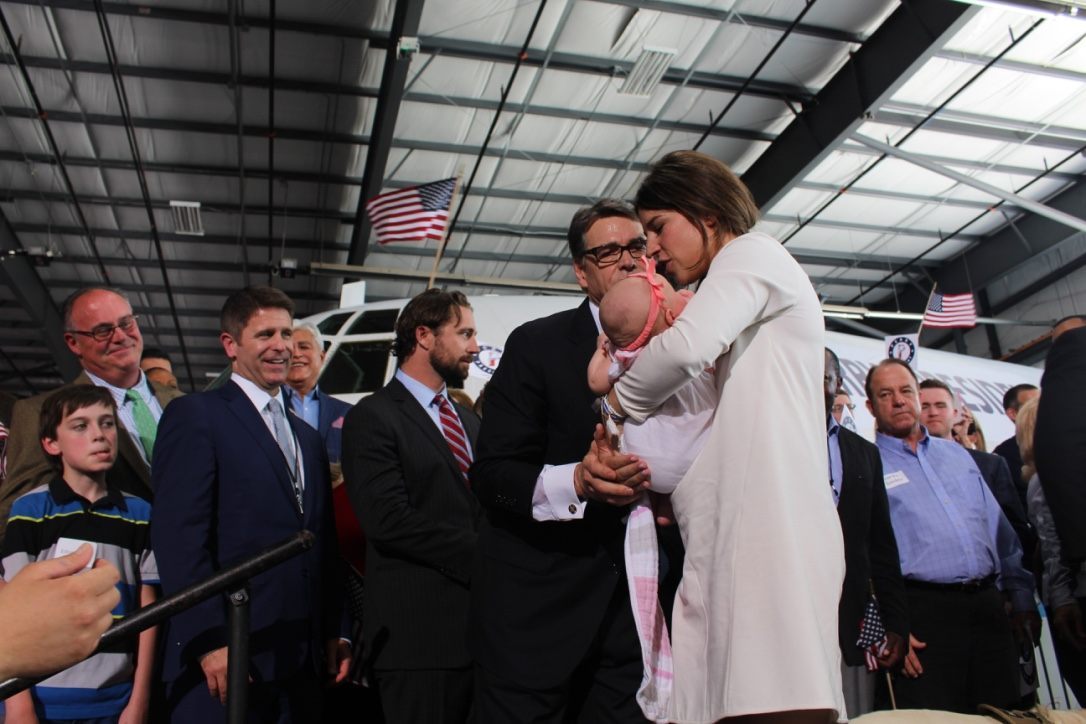 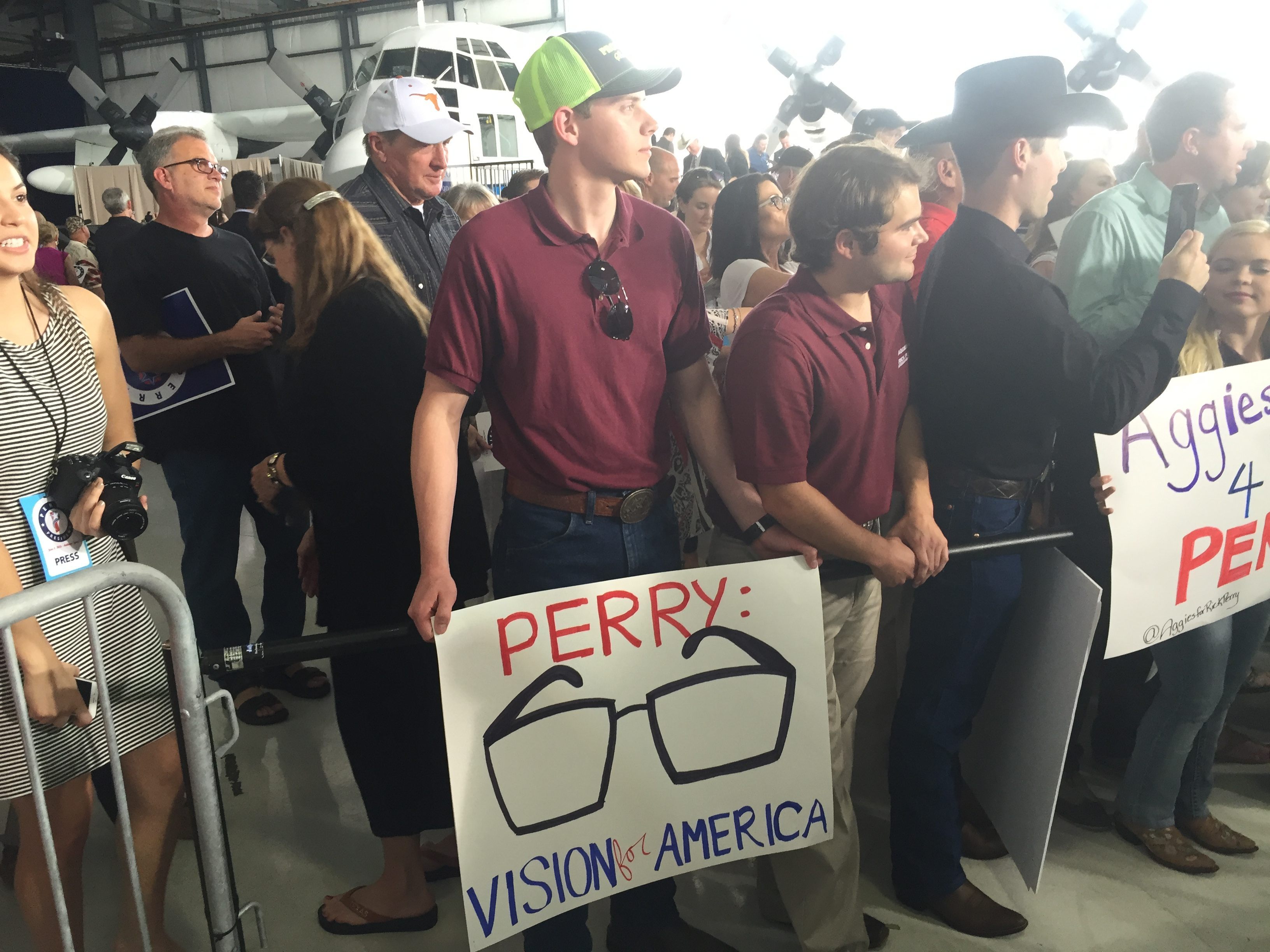 Several supporters brought signs, this one a reference to Perry’s “hipster glasses” that said “Perry: Vision for America.” Another one not pictured said, “AmeRICKa.” Photo by Sarah Rumpf. 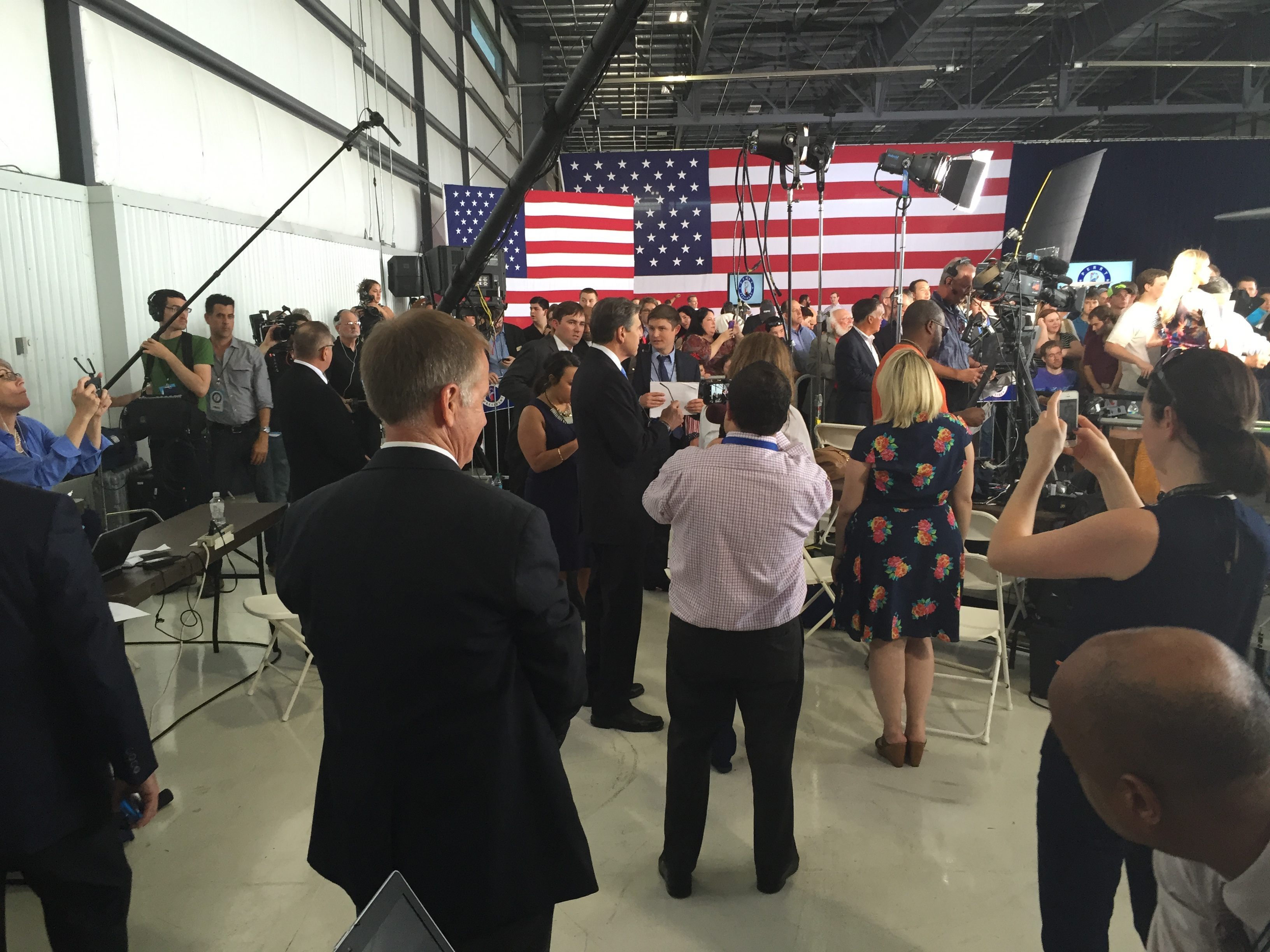 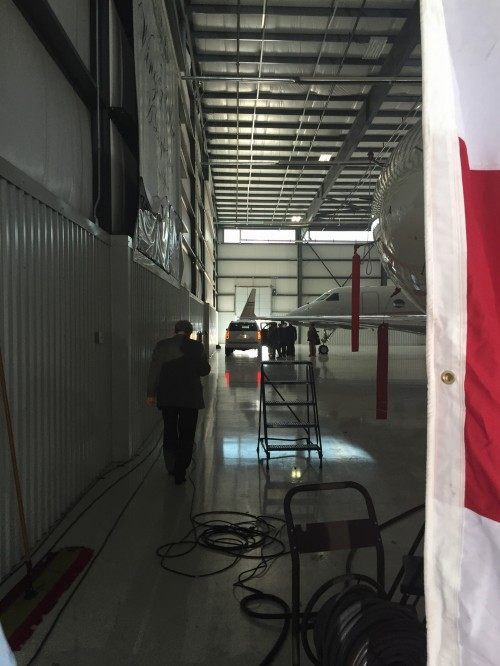 Elvis has left the building. Gov. Perry and staff get into a van that will take him to his next stop on the campaign trail. Photo by Sarah Rumpf.