Well! What a lot of drama in the conservative blogosphere over an apparently trivial diss: the word “cuckservative.” I’m going to lose some friends and admirers with what follows, but who cares. Let me explain to you what you should think about this ridiculous internecine quarrel.

The drama started on July 22, when Rush Limbaugh referred to critics of Donald Trump as “cuckolded Republicans.” A day later, Red State’s Erick Erickson said the term was “coined by white supremacists” as a “slur against Christian voters.” This was echoed by a Daily Caller columnist, and then reported on in the liberal New Republic. By then, the internet was on fire with allegations that “cuckservative” was a racist term.

As a helpful right-wing blogger recently noted, I have “literally taken black dicks in the ass.” So, as the leading conservative authority on interracial intercourse, I therefore feel compelled to set the record straight on the so-called racial origin and dimensions of this insult.

Here’s my verdict: all the writers above are wrong. As someone who’s been covering web culture and online memes for years and who has a great deal of respect for how well many right-wingers have taken to internet culture, I’m slightly embarrassed by my fellow conservatives’ inability to understand a term that returned to popular use not on white power websites, but on 4chan.

I should say at this point that I’m not a user of the hashtag. I’m probably one of its targets, in fact: I score at least 5/10 on this checklist.

The original meaning, of course, referred to a man with an unfaithful wife. In recent years, it also describes a new sexual fetish where “cuckolds” watch their partners have sex with another person. For some reason, the Daily Caller’s Matt Lewis thinks that exclusively black men feature in this kind of pornography — again, he clearly hasn’t spent enough time on 4chan.

On 4chan, “cuck” is used as a general term of abuse, to describe someone who caves in, surrenders, or sells out his core supporters. (His base, in political parlance.) 4chan’s founder Christopher Poole, for example, is called a “cuck,” not for any racially-charged reason, but because he capitulated to outside pressure to ban controversial discussion topics on the website. And because he was allegedly cuckolded in real life – but not by a black man.

It’s easy to see why “cuck” makes such a good insult. It’s a byword for needlessly relinquished manliness, for selling out and caving in. The original metaphor of watching your partner getting slammed by another dude now simply means abandoned principles and a lack of backbone. It’s a byword for beta male or coward.

Semantic shifts like this happen all the time. “Hooligan” used to refer to Irish drunks, “vandal” was about Germans, and the phrase “hip hip hooray” comes from an old European shepherds’ herding cry that in 1819 started to be used as a call-to-arms for citizens Hebrew-hunting in the Jewish ghettos.

But we don’t cry “racist” whenever someone says any of these words. That would be stupid. That would be playing the sort of dumb, disingenuous game that liberal race-baiters do. Right?

Another popular use of the term is as a reference to conservatives who “virtue signal” with meaningless platitudes to suck up to places like MSNBC. Or it could just mean Lindsey Graham, Karl Rove, or, yes, Jeb Bush.

Mike Cernovich, a lawyer and blogger who has used the hashtag enthusiastically, describes what it means to him: “A cuckservative is a Republican who enjoys watching his friends on the right, and indeed his entire country, get screwed by the radical left.”

“Rather than have the back of their allies or tell the left to worry about its own members, such as Bill Ayers and Al Sharpton, the right has given the left moral authority,” he explained. “You can see the cuckservative phenemona in the campus rape hearings about to happen in the U.S. Senate. Not a single Republican senator will speak out in favor of due process or refute the rape culture nonsense.”

Some commentators, bizarrely, have convinced themselves that the only people who use the word are Twitter obsessives yelling about Jewish conspiracies and white genocide. And it’s true, you can find a few dozen Twitter accounts that fit this description. But they’re in the minority.

Mostly, cuckservative memes are about GOP spinelessness on immigration, lies the political left tells about racism in America today, or simple frustration with the perceived limp-wristedness of the right-wing Establishment in the face of the vast left-wing smear machine. 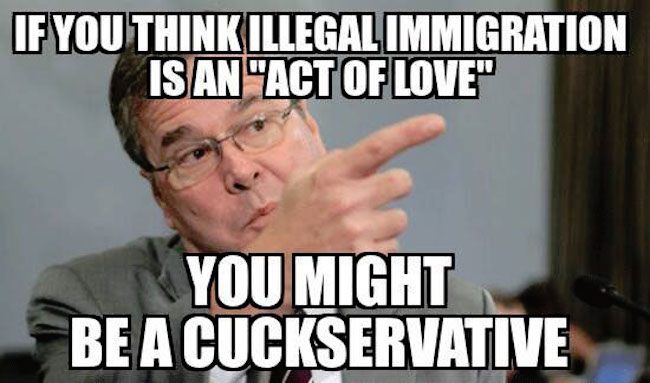 Indeed, the suspicion of many is that this is another case of virtue signalling from mainstream conservatives, rather proving the point of the hashtag and demonstrating it better than any gloss yet published. A sort of meta-definition in action, since it demonstrates supposed conservatives using precisely the “slander and move on” tactic so beloved of liberals.

Cernovich says “cuckservative” wounds its targets not because it’s racist, but because it’s accurate, and it taps into frustrations the conservative base has about the Republican Establishment’s capitulation or even silence on the issues that matter most to so many voters.

“The racial overtones of cuckservative are not as ominous as the cucks claim,” he says. “Why is the right so afraid of being called racist? Why do they attack their allies on the right, even calling us racist… It’s because Republicans are cuckservatives who delight in watching their own side getting fucked.”

Cernovich is clearly not a bigot, though the odd person posting on the hashtag may well be: some of them seem to hate Jews in particular. Yet, despite my own Jew-ish heritage, I don’t feel threatened by the anti-semites or racists of the internet. As long as they aren’t boring – and to be fair, many of the inane link-spammers on Twitter are quite boring – I’d even sit down and debate them.

There just aren’t that many, and they don’t have enough power to frighten me, and in any case most of their really outrageous statements are only said to shock anyway. That’s why the people who constantly call for their social exclusion make me suspicious.

But there’s another, more – dare I say it – problematic, and possibly more likely explanation for the current attack on those who use the word “cuckservative.”

Much like the attacks on the Tea Party from establishment Republicans, I wonder if this is an attempt by deeply unpopular Republican moderates to smear insurgent challengers and consolidate their position. Keep in mind that the panic started just a day after Rush Limbaugh accused Donald Trump’s critics of being “cuckolded Republicans.”

Isn’t it strange that one of the wittiest new memes to describe sell-out Republicans was attacked as racist just as it began to be used as a means to describe Trump’s opponents?

Trump’s opponents, of course, are dead-set on branding the man a racist. As with UKIP in the UK, Trump’s crime in the eyes of liberals has been to talk about perfectly legitimate concerns about unchecked immigration – concerns shared by an increasing number of Americans, and not just white Americans.

If the lesson of UKIP is any guide, this is not a winning strategy for moderate Republicans. Unless they engage on the issues that voters are concerned with, instead of playing the left’s game of shaming and ostracism of their own people, the perception that they are, indeed, “cuckservatives” will only blossom among voters.