“Correct The Record,” a project of the American Bridge Super PAC supportive of Democratic Presidential candidate Hillary Clinton, attacked Republican Presidential candidate Carly Fiorina by literally demonizing her. In a post on the blogging format Tumblr, the group included a photoshopped image of Fiorina with demonic red eyes.

“Correct The Record is a strategic research and rapid response team designed to defend Hillary Clinton from baseless attacks,” the motto reads at the top of the Tumblr page and on the group’s Twitter account. In the post at issue, Fiorina’s record is attacked and reference is made to the infamous “Demon Sheep” television ad from Fiorina’s 2010 California Senate campaign.

The “Demon Sheep” ad was one of the most memorable from any recent election cycle. In the ad, one of Fiorina’s opponents in the Republican primary was described as a “FCINO: a Fiscal Conservative in Name Only,” and portrayed as a wolf in sheep’s clothing.

Attacking your Republican primary opponent for a big spending record isn’t memorable. But this ad was extremely memorable, because of how they showed the “wolf in sheep’s clothing” metaphor. An actor in a sheep costume, crawling around on his hands and knees amid a flock of real sheep in a field, wore a sheep mask with bright red glowing eyes. That image of the obviously fake sheep with the red eyes was quickly dubbed the “demon sheep,” and went viral, even getting its own Twitter account (not run by the Fiorina campaign).

So what does a 2010 viral ad have to do with the 2016 presidential race? Correct the Record decided they did not like Fiorina attacking Clinton’s record, and wrote a post calling Fiorina a “Demon Sheep,” complete with a photoshopped image of Fiorina with glowing red eyes. 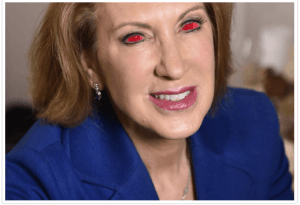 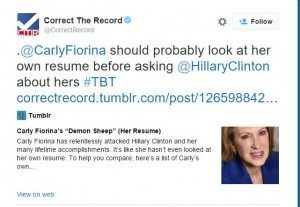 Correct The Record tweet showing embedded image with link to the Tumblr page.

Cooler heads seem to have prevailed, because the image was removed from the post, but not before Clinton’s own Tumblr page liked and reblogged (shared) the link.

Screencap from bottom of Correct The Record Tumblr post, showing that the post was liked and reblogged by Hillary Clinton’s official Tumblr page.

Super PACs cannot communicate with the candidates they support, so Hillary Clinton cannot be blamed for creating the image or the post. But by liking and reblogging the link, the campaign has indicated approval of it.

Breitbart News asked Fiorina recently about the Demon Sheep ad, as part of the ongoing discussions we are having with the Republican presidential candidates. She views the ad with good humor, and grinned and laughed when we mentioned it. Despite some of the criticism the ad received, Fiorina does not regret it, and mentioned that the ad was effective in getting her name out there and in helping her secure her victory in the Republican primary.

“Politics has become so formulaic,” said Fiorina, “and it’s why, I think, people sort of check out.” Fiorina told Breitbart News that while she knew politics was not a game, she was proud of how people came up to her “all the time” to thank her for being genuine and fun, and the Demons Sheep ad was part of that.

At the end of the post, Correct The Record mentions the Demon Sheep ad as one last attack on Fiorina, saying that it “spawned an Internet meme — and gave children nightmares for years.”

The Demon Sheep is unlikely to be the hero of the next Pixar film, but we’re highly skeptical that there were any children suffering “nightmares for years” because of it.

What all this fuss does show, however, is that Carly Fiorina’s rising poll numbers and positive buzz are starting to give Hillary Clinton nightmares.