Hillary Clinton has the lowest favorability rating she has ever had since she stepped onto the national stage in 1992.

In its most recent survey, Gallup found 41% of respondents have a favorable view of Hillary versus 51% who have an unfavorable view. The only time Hillary’s favorability has been this low in Gallup’s poll is back in 1992 when she first came on the scene. But as Gallup notes, those early favorability ratings “were mostly a product of the public’s lack of familiarity with her, rather than any kind of broad unpopularity.” In other words, since people got to know her she has never polled as badly as she is right now. 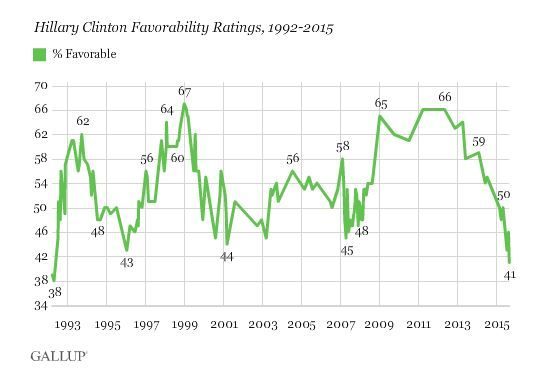 Clinton’s peak favorability was 67% in 1998. That was when the public learned her husband had cheated on her in the White House with a young intern. Hillary’s favorability soared once again during her tenure as Secretary of State. During this period her favorability remained above 60%, and in 2011 and 2012 it remained at a constant high of 66 percent.

Other polls have shown Clinton’s favorability in free-fall since March when word of her private email server first became national news. Polls asking about her honestly and trustworthiness have also shown a substantial decline in the wake of questions about her email and her family’s charitable foundation.

There is some good news for Hillary in the latest Gallup poll. While a majority of Americans see her unfavorably (51%), the views of Democrats have remained steady. Among Democrats, Hillary was at 74% favorability in mid-July and remains at exactly 74% through September 1st. Most importantly, that’s still 28% better than her nearest competitor, Bernie Sanders, who is at 46% in the latest survey.