The United States resettles more migrants than any other country in the world and six times more migrants then all the Latin American nations combined, according to an analysis by Senate Subcommittee on Immigration and the National Interest.

A chart released Friday by the office of subcommittee Chairman Jeff Sessions (R-AL) highlights that although the U.S. has about half the population of Latin America, it is host to six times as many migrants. The analysis is based on data from the United Nations’ “International Migration Report 2013.” 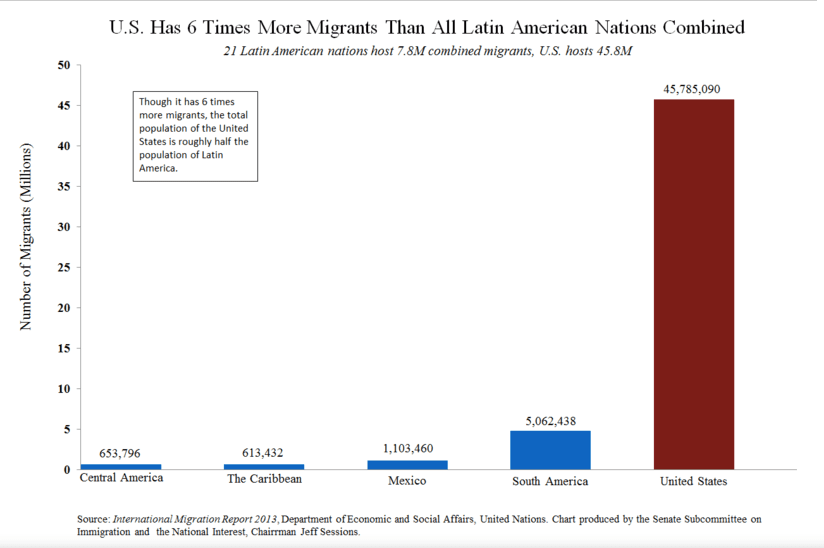 According to the chart, the 21 nations comprising Latin America host a combined 7.8 million migrants. Meanwhile the U.S. hosts about 45.8 million.

“As a matter of comparison, Latin America contains nearly twice as much of the world’s population – more than 8.5 percent – but houses only about 3.35 percent of the world’s migrants.  While the United States takes in one-fifth of global migrants, no other nation on earth has taken in more than one-twentieth,” the subcommittee explains.

The subcommittee’s analysis comes as the Obama administration pursues an effort to resettle at least 10,000 Syrian refugees next year, over the national security and fiscal concerns voiced by some Republicans.

“By contrast, only about 1 in 300 of all migrants living in Mexico today are from the Middle East or North Africa.  (About 1 in 7 migrants in Mexico hail from other Latin American countries, and about 7 in 10 migrants in Mexico are from Canada or the United States),” the subcommittee’s report reads.

The U.S. has also resettled more than 300 times more Middle Eastern migrants in the past decade as its southern neighbor, Mexico, the subcommittee notes.

In the long view, the subcommittee highlights a 2011 Pew Research Center report arguing that the trend of the U.S. outpacing Latin America in Middle Eastern migration will continue.