Media analysis of the situation surrounding the Texas Muslim boy who brought a device to school that resembling a bomb reveals that Al Jazeera chose to never show what the ‘clock’ looked like to their viewers in a report on the matter. The boy, Ahmed Mohamed, can be seen claiming he invented a clock, when all facts suggest he simply took a digital clock out of its casing and then assembled the parts into a case. 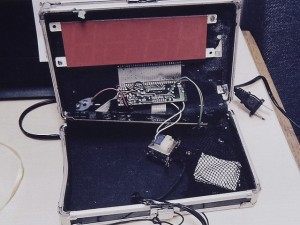 Al Jazeera helped to create outrage by telling the story and refusing to show their viewers that the ‘clock’ actually resembled a suitcase bomb. With a headline that read, “Was Ahmed Mohamed Arrested Because He Is Muslim,” Al Jazeera’s Mehdi Hasan can be seen stoking the fires during his interview with Ahmed:

“Ahmed, let me ask you about what happened to you this week. Why do you think your teachers who knew you–you were this great student–why do you think they reacted the way they did when they saw this clock that you made at home? Why did they assume it was a hoax bomb?”

The Al Jazeera interviewer went on to tell Ahmed, “Obviously you’re not a threat to them. You’re a 14-year-old boy.”