FRANKLIN, Tennessee — GOP frontrunner Donald Trump offered a ringing defense of gun rights and the Second Amendment to an enthusiastic standing-room-only crowd of 3,000 Tennesseans on Saturday. An overflowing audience of an additional 1,000 stood outside The Factory in Franklin, Tennessee in the drizzling rain as they listened to the rally on speakers.

It was a huge turnout for Trump, whose campaign team announced the event less than 72 hours earlier. 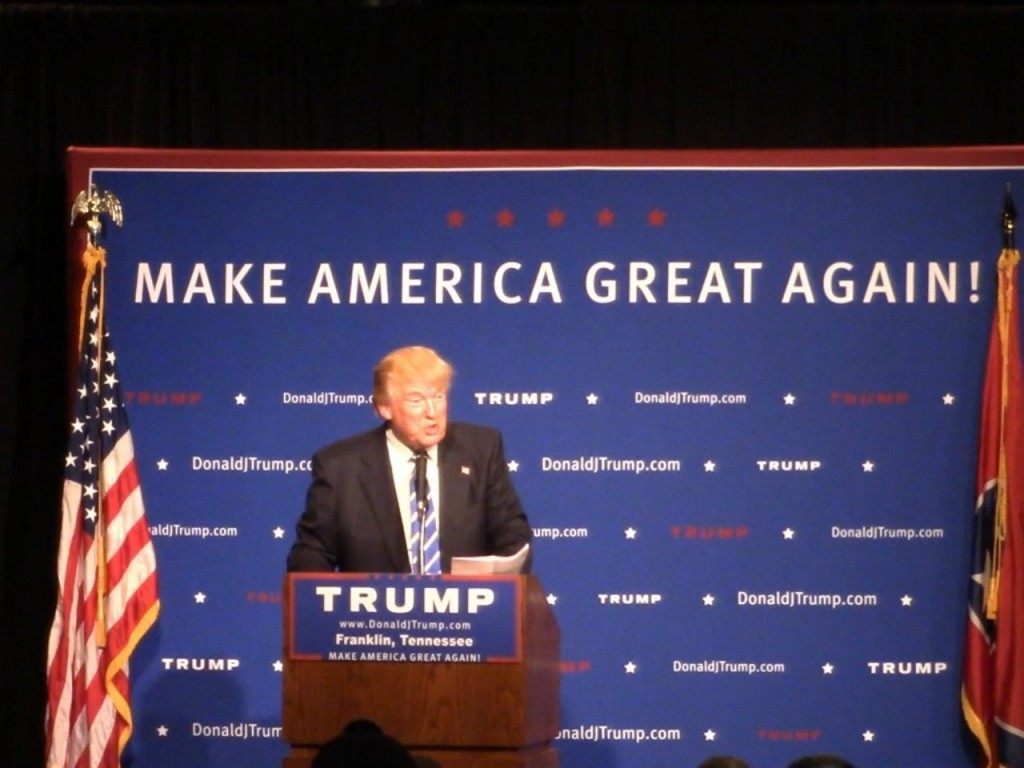 “We have an incredible policy,” Trump said, as he waived a copy of the Second Amendment position paper he released on September 18. “You know, they all wanted me to do policy.”

“Read it!” someone in the crowd shouted to Trump.

“I’ll start off. Should I start off, really?” Trump asked, to which the crowd responded with cheers.

“Protecting our Second Amendment rights will make America great again,” Trump began, reading the title of his policy paper to the receptive crowd. “The Second Amendment to our Constitution is clear.”

Then, in true Trump style, he ad-libbed.

“Now this is in light of what happened in Oregon. Now every time something happens like this… They don’t blame mental illness, that our mental health care is out of whack, and all the other problems,” he said.

“I will tell you, if you had a couple of the teachers or somebody with guns in that room you would have been a helluva lot better off,” Trump added. “We can say that with respect to a number of places where that happens. How about the military event that took place three or four months ago? Where you had these highly decorated soldiers in a military area… where they weren’t allowed to have their guns. And this whack job walks in and starts shooting them.”

“Why are we having gun-free zones in a military camp?” he asked.

Trump then returned to reading his policy statement to the crowd.

“The right of the people to keep and bear arms shall not be infringed upon. Period,” Trump said to a rousing chorus of cheers.

“Period!” he added for emphasis to further loud cheers.

“The Second Amendment guarantees a fundamental right that belongs to all law-abiding Americans,” Trump continued to read.

“The Constitution doesn’t create that right; it ensures that the government can’t take it away,” he added to further cheers from the crowd.

“They’re doing all sorts of moves to try and take it away,” Trump said, departing again for a moment from the script of the policy statement.

“The Founding Fathers knew,” Trump continued to read, “and our Supreme Court has upheld, that the Second Amendment’s purpose is to guarantee our right to defend ourselves and our families.”

“We need that!” he emphasized.

Trump then surprised the crowd and many in the media with a little known personal fact.

“In fact, I have a license to carry in New York, do you believe that?” Trump said to another round of cheers.

“So this is about self defense, plain and simple,” he continued.

“It’s been said that the Second Amendment is America’s first freedom,” Trump said, reading further  from his policy paper to the audience. That’s because the right to keep and bear arms protects all our other rights. We are the only country in the world that has a Second Amendment. Protecting that freedom is imperative,” he added.

Trump then stopped reading from the policy paper and summarized the details of how he will protect those Second Amendment rights if he wins the Presidency.

“And I do a whole paper on it. It’s gotten fantastic reviews. It’s enforce the laws on the books. It’s fix our broken mental health system. All of these people. It’s not the guns, it’s these sick people,” he said.

“Defend the rights of law-abiding-and this is important because they’re trying to take your rights away. They say ‘we only want a couple of bullets in the magazines, maybe you shouldn’t have magazines, have a gun that fires one bullet… have nothing!” Trump added. “You know, they have background check, already in place, and that was done in 1998, and people slip through and our government’s not doing a great job.”

Trump hit on several other current topics in his talk, emphasizing the themes that under the Obama administration, the country has followed a weak foreign policy.

“Our leaders are stupid,” he said several times throughout the event.

Trump said that if he is elected President, the four American hostages currently being held by Iran — the same hostages Secretary of State Kerry and President Obama didn’t attempt to negotiate for — would be returned to the United States immediately.

He also belittled the weakness shown by Obama and Kerry to the Iranians, who now apparently are saying they are willing to negotiate the possible release of three of the four American hostages in return for 19 of their people and “many other things.”

Some of the loudest applause came when Trump promised that if he is elected President, “the words Merry Christmas will be returning.”

Trump spoke for an hour, then went outside where he addressed the 1,000 who had been waiting in the rain, and then held a brief press conference.