Specialist Andrew Brown told ABC News the story behind injured military dog Rocky, who gained fame after a picture of him with his Purple Heart went viral on Facebook.

Schrapnel from an improvised explosive device (IED) injured Brown and Rocky in Afghanistan. They were flown to Kandahar, Afghanistan, where both received the Purple Heart. 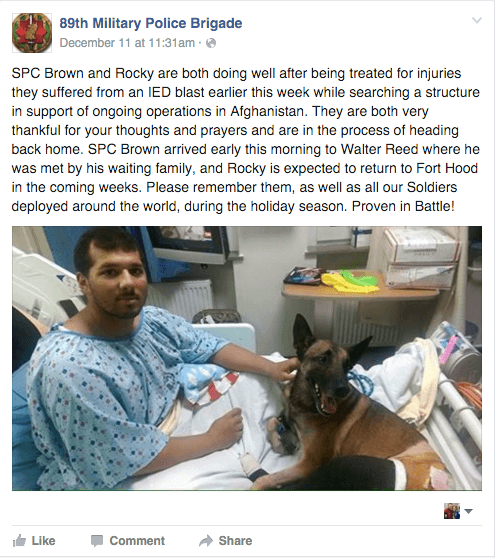 Brown said Rocky is “an American soldier,” and his “rank is one above his handler’s.”

“He does everything,” he explained. “I’m just really a guy with a leash. I bring him to the area and let him do his thing. If he responds, I translate that … let them know my dog got a response right here. I know the way he works, I know his change of behavior.”

Brown is still in DC, where he will undergo more surgeries and treatment. Rocky remains in Germany until he fully recovers. In the meantime, Brown holds both Purple Hearts until he is reunited with his faithful companion.