A top deputy to House Speaker Paul Ryan is trying leadership’s legislation that could pink-slip 200,000 blue-collar Americans. Rep. Steve Scalise claims that employers are suffering from a shortage of workers.

The “provision is a narrow, targeted solution to the workforce crisis faced by many of our small and seasonal business,” claims the statement from Scalise, Ryan’s top vote-enforcer, or “whip.” The statement was written by the House’s judiciary committee, which also wrote the H-2B expansion.

The provision in Ryan’s 2016 omnibus allows employers to import up to 264,000 low-wage foreign workers to take blue-collar jobs at American hotels, resorts, landscaping firms, seafood processors and other sites. That’s up from 66,000 imported workers in 2015.

The cheap workers are deemed “seasonal” by the law, even though they can stay for 10 months, and many are hired by brokers to work at a series of different jobsites.

The overall costs imposed by the H-2B program — more unemployment and higher welfare payments — are paid by taxpayers.

The unemployment rate for people with just a high-school certificate was nine percent in 2014, and their median wages were just $488, or $12 per hour. In November 2015, only 58 percent of the 33.5 million Americans with high-school qualifications were working.

In his statement, Scalise backed industry’s claim that there’s a shortage of workers, despite federal data showing a near-record low in the percentage of Americans who are working. 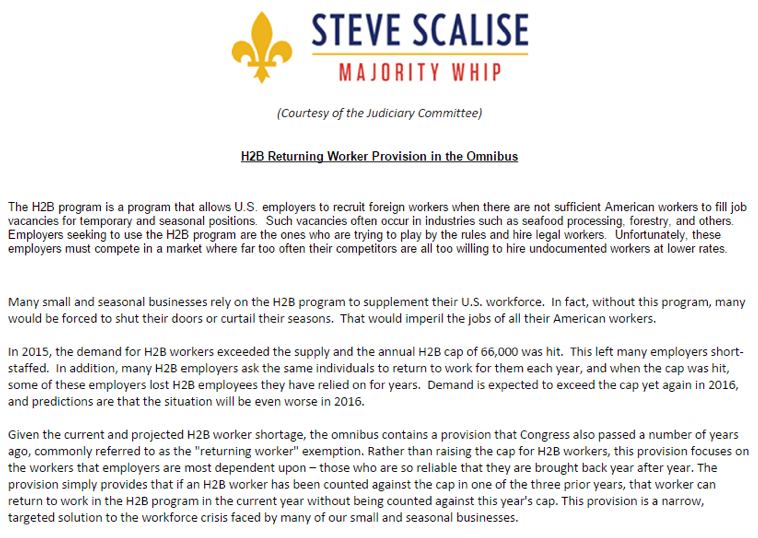 “The House’s inclusion of the H-2B increase underscores that the growing divide between voters and party elites is not simply over means, but ends,” said a Dec. 18 statement by Sen. Jeff Sessions.

“Blithely dismissing the just concerns of the great majority of American voters, and especially Republican voters, is not a wise course for the Republican Speaker,” said Sessions, who took the unusual step of actually naming the target of his criticism — Speaker Ryan — in his statement.

Sen. Ted Cruz also slammed Ryan’s H-2B pink-slip plan, in an op-ed published by Politico. “To understand the priorities of Republican leadership, contrast these actions with the last-minute stocking stuffers that did make their way into this must-pass bill to fund the government — Quadrupling of H-2B visas for low-skilled workers, which will only drag down wages, kill American jobs, and hurt working men and women.”

House members also criticized Ryan’s outsourcing plan. North Carolina Republican Rep. Mark Meadows, told The Daily Caller that “a lot of us are troubled that language got put in there without going through the normal process.”

“I didn’t know about it. It seemed like a shocker to most of us,” Virginia Rep. Dave Brat said.

Even some Democrats panned Ryan’s plan, which will likely boost the number of business lobbyists who will push for a permanent extension of the H-2B outsourcing program. Missouri Democrat Rep. Lacy Clay, according to TheHill.com, said the outsourcing plan “could wreak havoc on our job market, especially with unemployment being so high among African Americans.”

“We don’t need cheap labor to come in,” he added.

The new Scalise claim also clashes with Ryan’s flawed Thursday claim that the change is “tiny” and only effects 8,000 workers.

On Thursday evening, Ryan went on Michael Medved’s radio show to again dismiss criticism of the blue-collar outsourcing plan, which he has repeatedly supported. “Now there is a little hysteria, hyperbole, and just innuendo with respect to this bill,” he insisted, before claiming that:

For instance, the H-2B worker provision in here, which is an immigration thing. It is like 8,000 temporary workers for one year, is all this provision provides. It has been a provision that has been out there for months. The committee passed it in July – nobody mentioned anything about it. It’s a tiny provision, but I think there are those who for various reasons are trying to make a mountain out of a molehill, making an issue of something that it isn’t, and that’s what you’re kind of hearing and seeing on the Internet these days. In fact, the program is not ‘an immigration thing.’

“Ryan is wrong about the language he inserted into the omnibus bill,” says John Miano, an immigration lawyer. In a message to Breitbart News, he concluded:

Speaker Ryan is simply wrong… This is a typical lobbyist-written provision designed to obscure what it is doing and make what it is doing debatable. It [allows] a maximum theoretical quadrupling of H-2B workers, but the way it is written it is unlikely that the number could actually reach that high. However, it is a minimum doubling of the number of those workers. The increase is somewhere between a doubling and a quadrupling.