Despite large uncertainties and many unknowns in Earth Science, scientists have a reasonable understanding of the answers to these questions.

Atmospheric CO2 is a “greenhouse gas,” and therefore, an increase of its concentration in the atmosphere will tend to warm the air. But the latest scientific research by William Happer of Princeton University has shown that the belief that a doubling of atmospheric CO2 will cause directly a 1°C warming of the globe may be incorrect. Indeed, the more likely answer is that a doubling of CO2 will cause only a 0.6°C warming, or about 40% less than previously thought. This makes it even more important to take with caution the excessive impact of CO2 on global air temperatures.

Complicating our understanding is that many processes involving the atmosphere, the ocean, and the land surface which affect the warming effect of CO2 are highly complex and largely incompletely understood. Those rushing to transition from a fossil fuel-based world economy to the wickedly named “decarbonized” future tout a relationship between a doubling of CO2 and global temperatures as large as 4 to 5°C. But how can such a calculation have any basis in scientific fact when the processes that form clouds, rainfall, snow, and ice — as well as the flow of air and ocean currents — are so imprecisely understood? How is it possible to create an accurate climate model given such uncertainties?

So, how well can we measure the consequences of CO2 on global air temperatures? Even this simple question is marred with half-truths and distortions arising from the politics of global climate change.

It is universally accepted that the most direct impact of atmospheric CO2 will be the warming of the lowest six miles of air. This is the layer that is best measured by satellites and balloon-borne instruments rather than surface-based thermometers which under-represent the poles, the tropics, the high altitudes, and the oceans. In short, thermometers are biased to where people live and confined to measure only the air within six feet of the ground. Satellites, by contrast, are not limited spatially and can estimate global temperatures in the lowest six miles, not six feet, of air.

But of late, anthropogenic climate change “believers” are pushing thermometer-based analyses and dismissing satellite observations. Why? For nearly the last two decades, satellite- and balloon-borne instruments have not detected any significant warming which does not support the climate change “disaster” scenarios the believers wish to promote. Besides, the bias associated with surface thermometers can easily be manipulated with subjective “bias adjustments” which allows the data to support the global warming hype.

A recent paper published in Earth Science Reviews (by W. Soon, R. Connolly and M. Connolly) discusses and demonstrates that the post-1970 warming, as measured by surface-based thermometers, was highly exaggerated by non-climate related factors such as changes in location, the time-of-observation bias, urbanization effects, and changes in land use as well as by changes in the measurement of sea-surface temperature and the fair-weather bias (ships tend to avoid storms) to estimate air temperature over the oceans.

However, the most important problem with thermometer/surface-based assessments is that the most important signal arising from CO2 impacts lies higher in troposphere — at about six miles — rather than at the surface. Satellite observations have provided a nearly complete global coverage since about 1979, providing us with an excellent record extending more than 35 years. These observations indicate that the atmosphere warmed slightly since 1979 but its temperature has remained relatively constant over the past fifteen years or so — despite the dramatic increase in CO2 concentrations.  This makes it hard to argue that global temperature changes are largely driven by changes in atmospheric CO2 concentrations.

Scientists from the National Oceanic and Atmospheric Administration (NOAA) cling to their bias-adjusted surface temperature record because it yields a far more continuous and rapid rate of warming than what was deduced from satellites and weather balloons records. This is consistent with the exaggerated “CO2 disastrously warms the planet” meme that, in part, keeps their funding levels high. Recently, they released a newer version that exaggerates the warming even further. Detailed explanations for their revisions — published in Science in June of 2015 — are not convincing but it is clear that their main effort was focused on making sure that the pause in air temperature increases over the past two decades vanished. The editor-in-chief of Science magazine, Dr. Marcia McNutt, proclaimed at a climate symposium in January that the revision “eliminates the [global warming] hiatus.” Scientists from NOAA and Lawrence Berkeley National Laboratory also wrote in Science that “whether or not the early 21st century global warming hiatus existed is not important”.

It is appropriate for us to offer a reminder from our colleague, the late Professor Bob Carter, who as early as 2006 warned that “There IS [sic.] a problem with global warming… it stopped in 1998… In truth, however, the biggest part of the problem is neither environmental nor scientific, but a self-created political fiasco.”

From a physics standpoint, the impact of increasing CO2 causes a relatively and disproportionately larger warming in the atmosphere than near the ground. Is there a problem, therefore, with the satellite record or the way in which it measures air temperature?

As previously mentioned and usually ignored by the believers, thermometers provide a poor spatial coverage of the Earth’s surface. By contrast, satellites carry instruments that accurately measure the amount of energy in thermal infrared and microwave wavelengths which directly relates to the temperature of the lower atmosphere (where most of the air resides and where the CO2 signal should be strongest) with nearly complete spatial coverage.

Global estimates of air temperature by satellites are independently produced by scientists from Remote Sensing Systems (RSS) and the University of Alabama-Huntsville (UAH), and their methods have been well-discussed and compared in the scientific literature.  Both groups show that global temperatures in the lowest six miles show no warming trend since 2002 (we start in 2002 mainly because the new global atmospheric temperature data record [labeled ROM SAF in the top panel] is available only starting September 2001 and partly to avoid the effect of the strong El Nino and La Nina between 1997 and 2001 – see graph below). 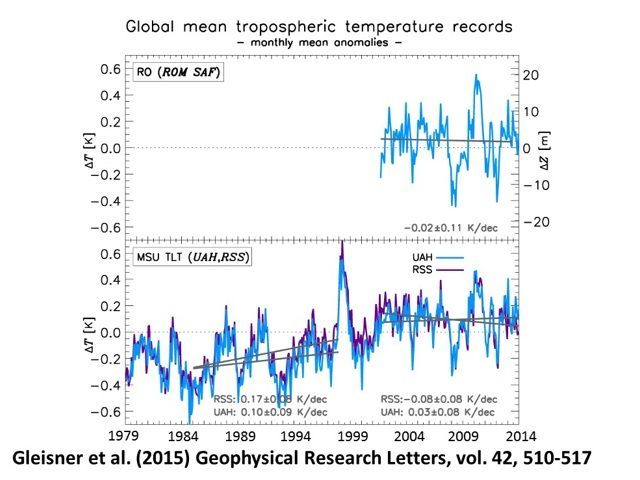 In addition, a third method of measuring global temperature over the lower atmosphere — using the series of GPS (Global Positioning System) satellites — can be obtained by accurately by measuring the propagation of radio waves through the atmosphere. The importance of this new method is that a near-complete coverage of the Earth is afforded and that global atmospheric temperature can be determined without requiring any complex satellite inter-calibration. Only the precise atomic clock is needed to measure the relative delay in propagation of radio waves through the atmosphere which, in turn, allows for a direct assessment of the atmospheric temperature over the lower portion of the atmosphere.

Unsurprisingly, the GPS-based method confirms what was measured by the thermal infrared/microwave radiometers aboard other satellites; that the nearly-two-decade-long temperature hiatus is real and the thermometer-based record is the oddball. More specifically, global atmospheric temperatures are not warming in the way predicted by the CO2-driven climate models, which serves to argue that CO2 does not act as the thermostat for global atmospheric temperatures.

An objectively science-based decision is clear: The preponderance of the evidence suggests that a discernable CO2-influence on the climate has been grossly overstated. So will you choose the scientific decision or rely on the politically-driven thermometer adjustments? Our future rides on the answer to this question.