A special episode of Breitbart News Saturday on SiriusXM Patriot channel 125, hosted by Breitbart News Executive Chairman Stephen K. Bannon and Editor in Chief Alex Marlow, will broadcast coverage of the funeral mass of Justice Antonin Scalia at the Basilica of the National Shrine of the Immaculate Conception.

Joining them on the broadcast will be Ken Klukowski live from the Basilica of the National Shrine of the Immaculate Conception, Dr. Thomas Williams live from Rome to discuss the Catholic rite of the burial of the dead, Father Frank Pavone on the legacy of Justice Scalia and the Requiem Mass, and Dr. Jennifer Pascual, music director of the Archdioces of New York, on the music and rituals of the Requiem Mass.

Breitbart News Saturday broadcasts on SiriusXM Patriot channel 125 and will begin at 10 AM Eastern and will continue live coverage until the conclusion of the mass today.

Thousands of people took upwards of three hours and more on the chilly streets of Washington D.C. Friday to pay their final respects, even if only for a moment, to Justice Antonin Scalia, whose body lay in repose in the Great Hall of the Supreme Court.

Bridgett Wagner of the Heritage Foundation snapped a picture at the end of the line this evening at 7 pm, and that line stretched, according to Wagner, “half way down the 300 block of East Capital Street.” As people got off work this evening, the line continues to grow.

Guards at the Supreme Court told Wagner that the public viewing will likely be extended to 9 pm and even later if need be. Viewing started this morning at 10:30, so it is entirely possible that public viewing for Justice Scalia will have gone nearly nonstop for 12 hours. There was a break in the middle of the day for President Obama to pay his respects.

The morning began with the site of more than 90+ former law clerks standing in two rows from the portico of the Supreme Court almost all the way to the street. On the top step stood Justice Scalia’s large family, his wife and his nine children and their children. A black hearse delivered the Justice’s body, and pallbearers walked him up the steep steps and into the Supreme Court where his son, Father Paul Scalia, read prayers for his soul. Lined up nearby were the remaining Justices of the Supreme Court, many of whom he did intellectual battle with on the major issues of the day.

The funeral Mass takes place Saturday at the National Shrine of the Immaculate Conception, said to be the largest Catholic Church in the United States. It was built to hold 10,000 worshipers. If Friday’s response to the public viewing of Justice Scalia is any measure, tomorrow the Shrine very well could be full.

Justice Scalia’s son will celebrate the Solemn Requiem Mass that may be in the Tridentine form, the Latin Mass that was common in the Church before the Second Vatican Council and that Justice Scalia attended weekly in Virginia or Washington D.C. 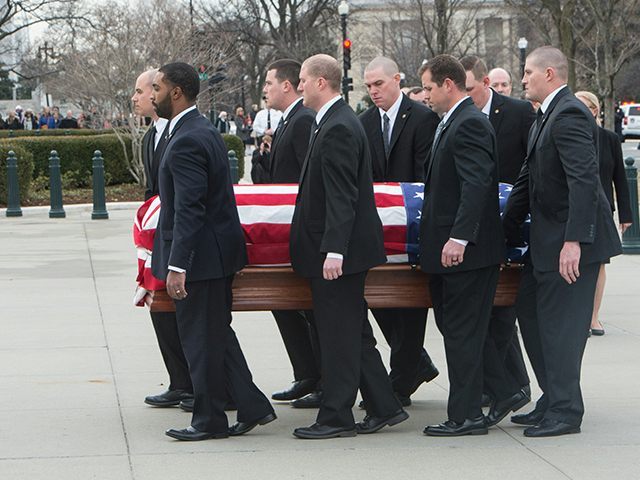 The casket of U.S. Supreme Court Justice Antonin Scalia arrives at the Supreme Court in Washington, DC, on February 19, 2016, where it will lie in repose until his funeral at the Basilica of the National Shrine of the Immaculate Conception on February 20. (Nicholas Kamm/AFP/Getty Images) 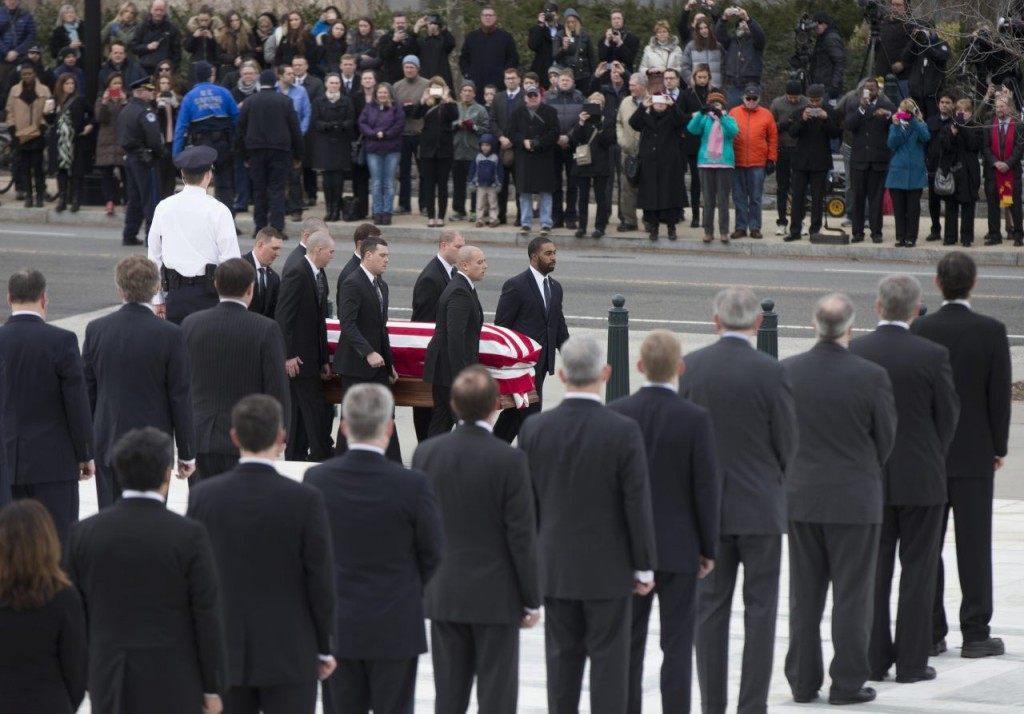 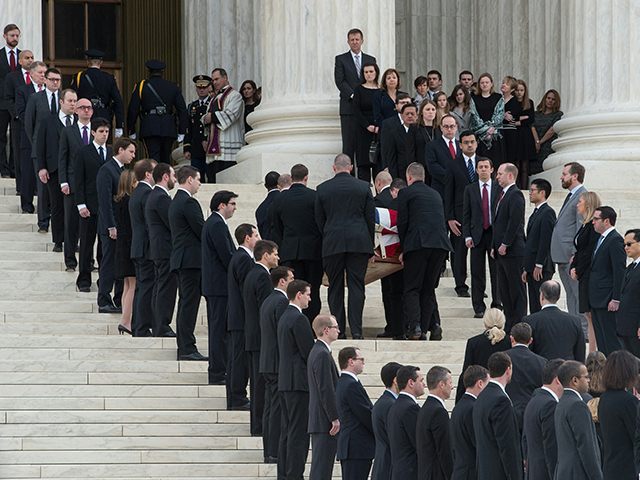 The casket of Justice Scalia arrives at the Supreme Court. (Nicholas Kamm/AFP/Getty Images) 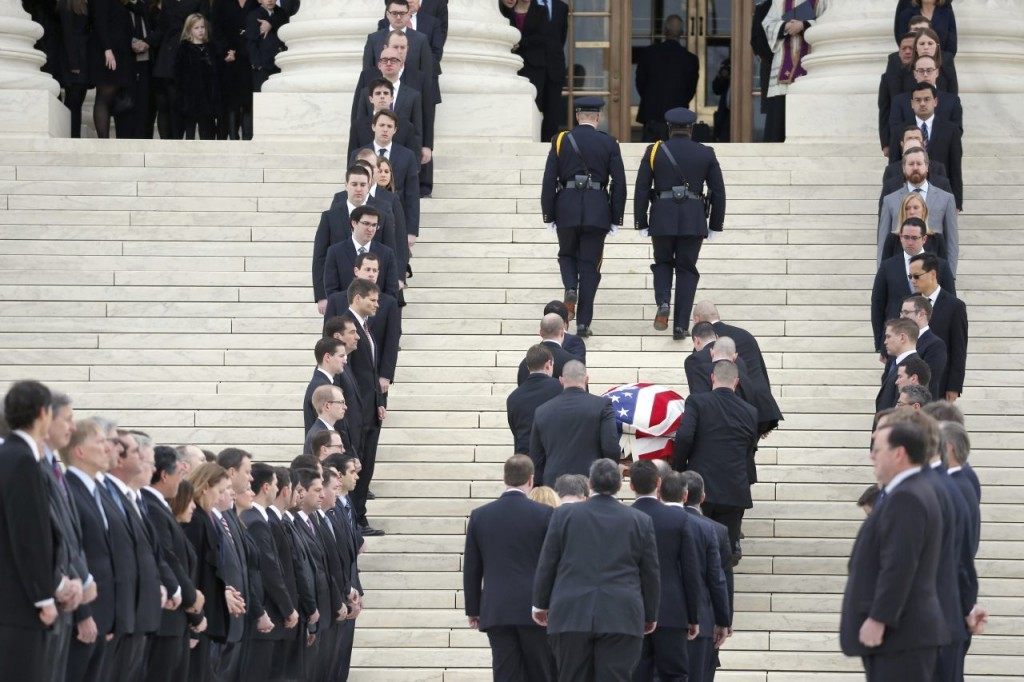 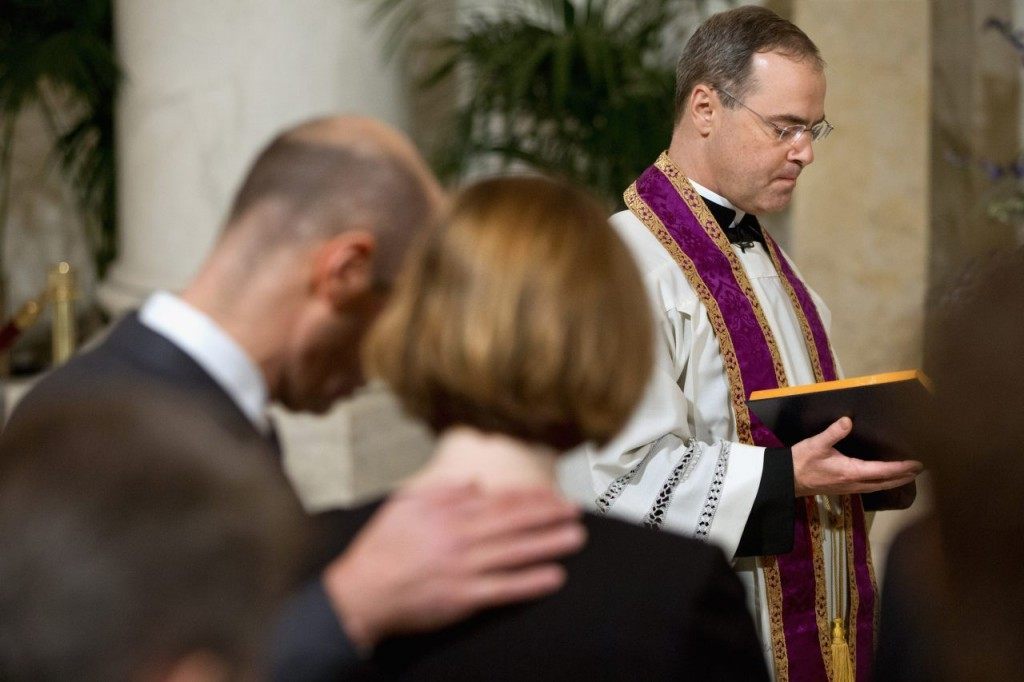 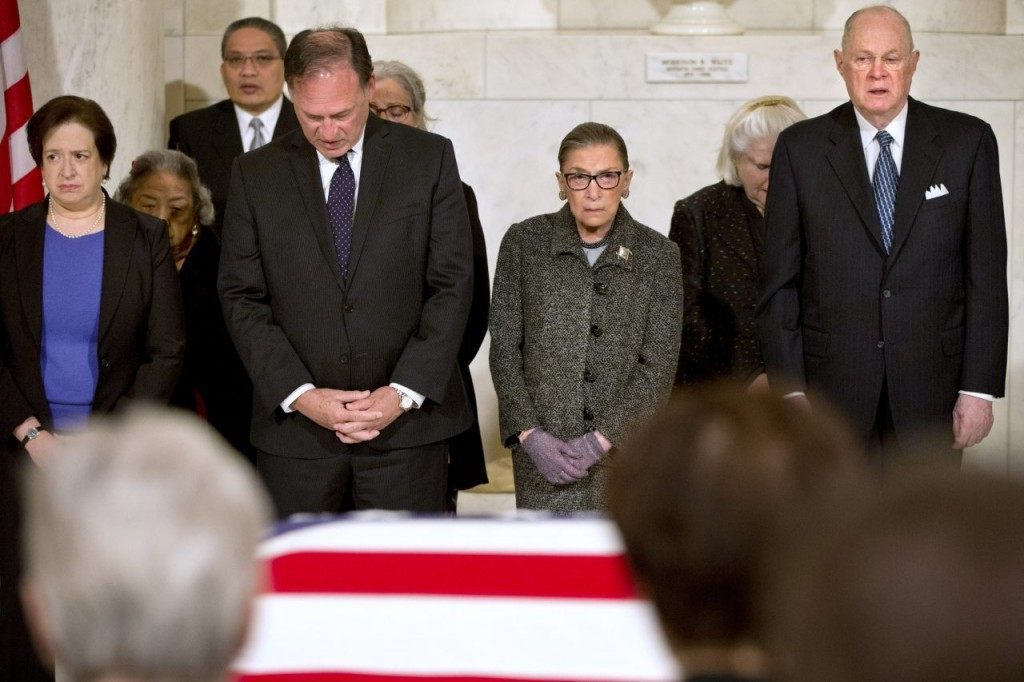 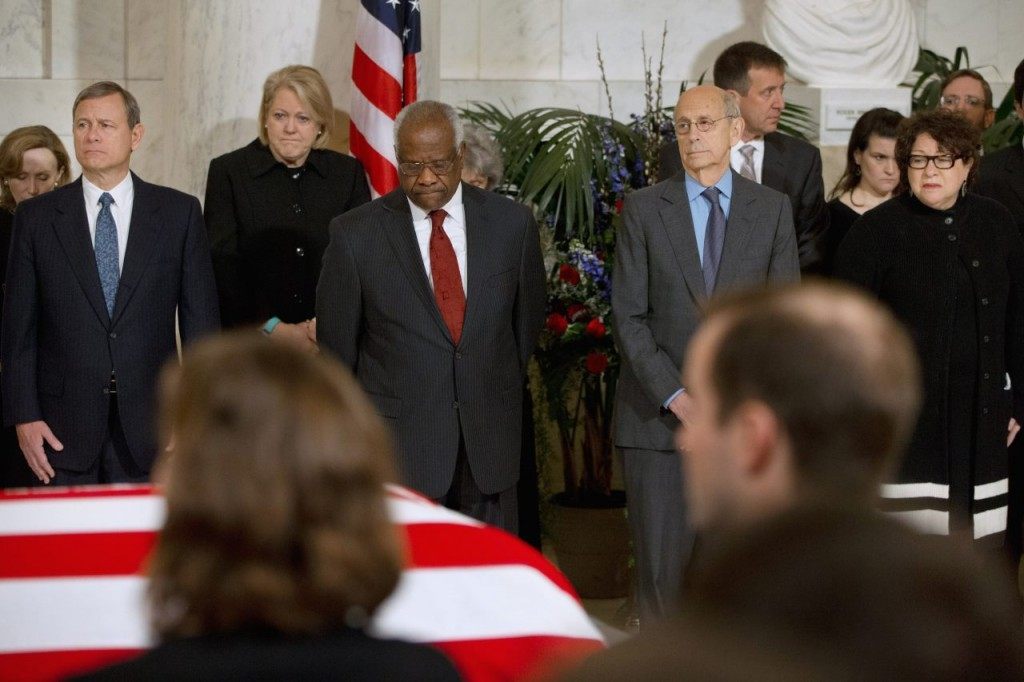 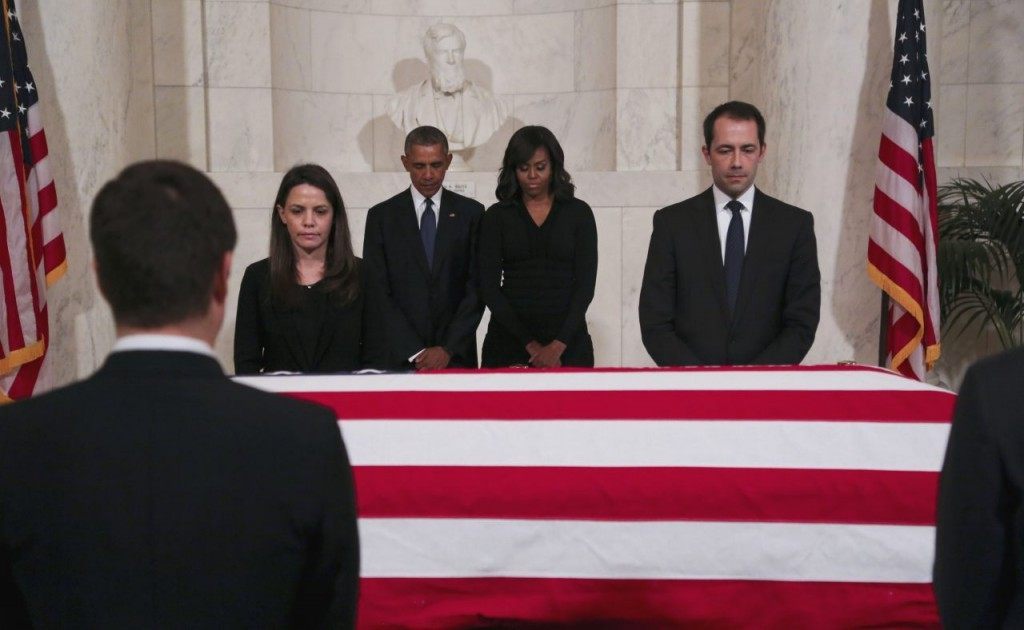 U.S. President Barack Obama and first lady Michelle Obama pay their respects to Justice Scalia, in front of his casket, in the Great Hall of the Supreme Court on February 19, 2016 in Washington, DC. (Photo by Aude Guerrucci/Getty Images) 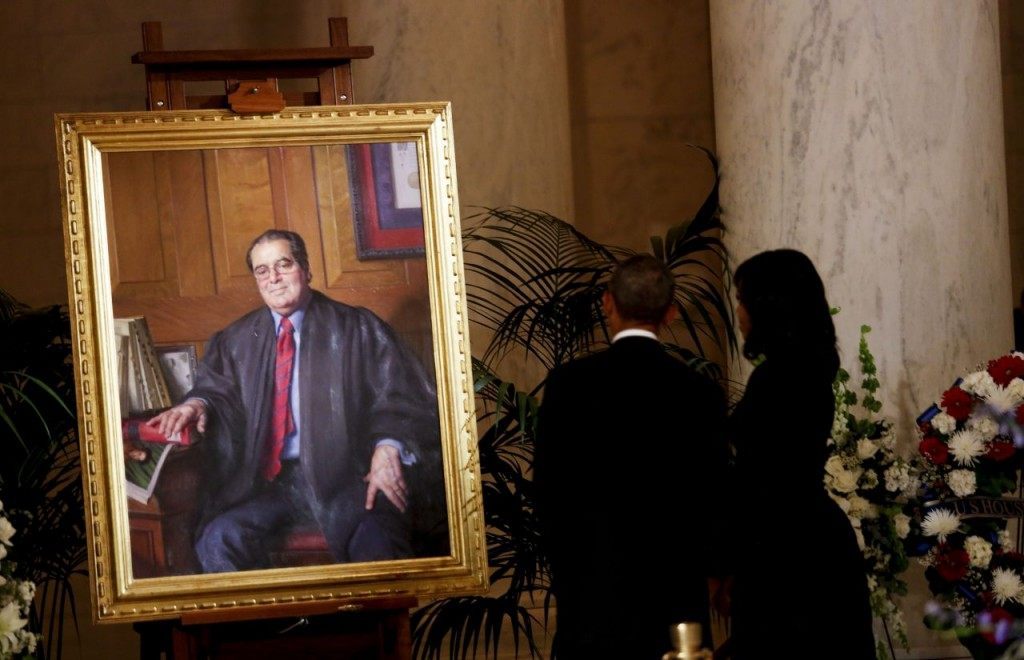 President Obama and First Lady Michelle Obama look at a portrait of Justice Scalia after paying their respects in front of his casket in the Great Hall of the Supreme Court. (Photo by Aude Guerrucci/Getty Images) 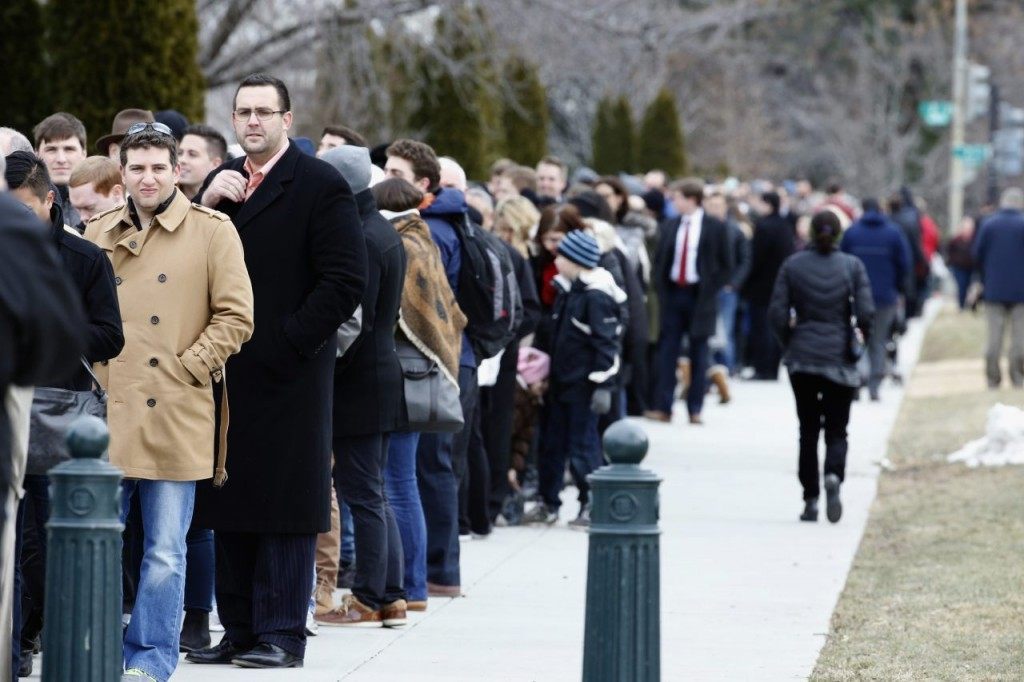 Thousands of mourners stand in line waiting to pay their respects on Friday for Justice Scalia as his casket rests in the Great Hall of the Supreme Court. (AP Photo/Alex Brandon) 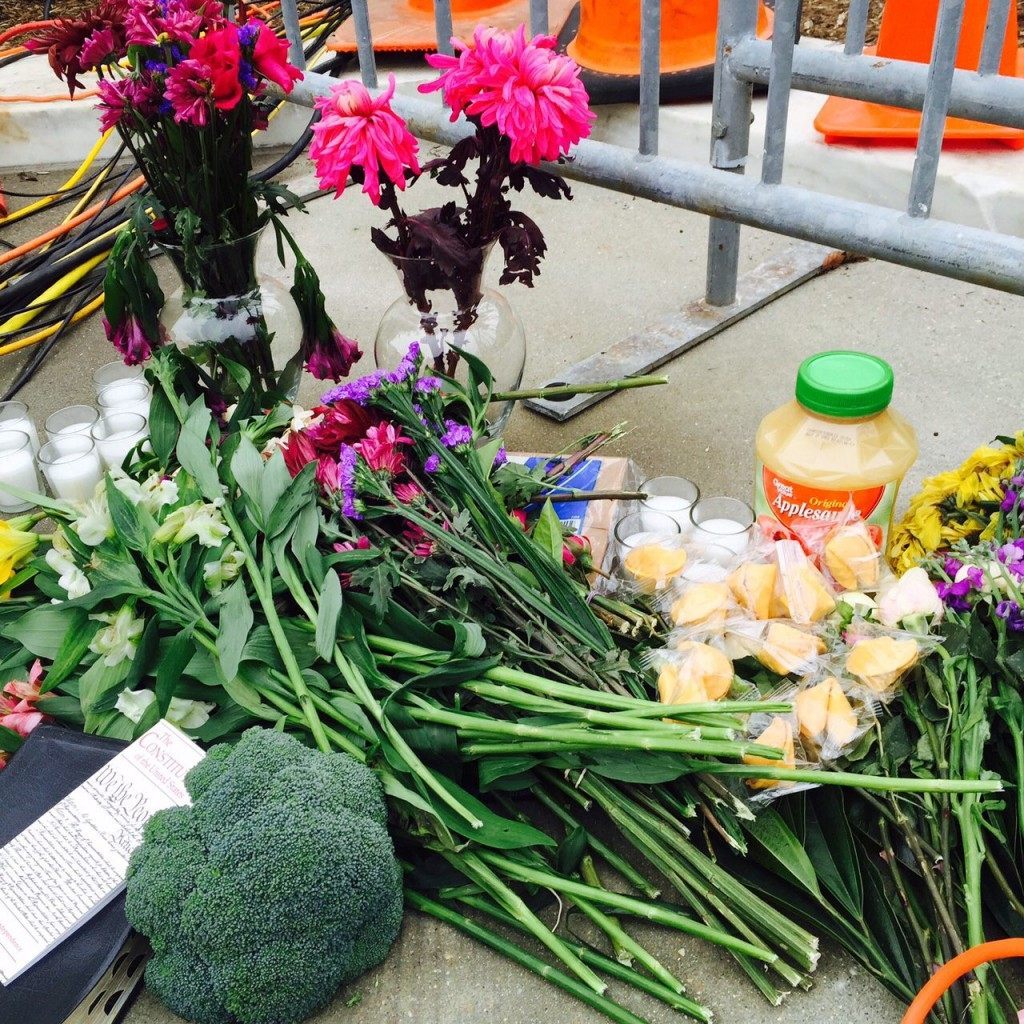 Fans of Justice Scalia created a small memorial at the bottom of the Supreme Court steps, leaving two jars of applesauce, a package of paper bags and a pile of fortune cookies, a nod to his biting dissents last year in the court’s gay marriage case and its ruling rejecting a challenge to President Barack Obama’s health care law. (AP Photo/Jessica Gresko)