Justice Antonin Scalia was laid to rest Saturday after a funeral Mass celebrated by his son, Father Paul Scalia, before a crowd of thousands of regular citizens and conservative elites in the National Shrine of the Immaculate Conception in Washington, D.C., and viewed on television through non-stop coverage on Fox News, MSNBC, and CNN. 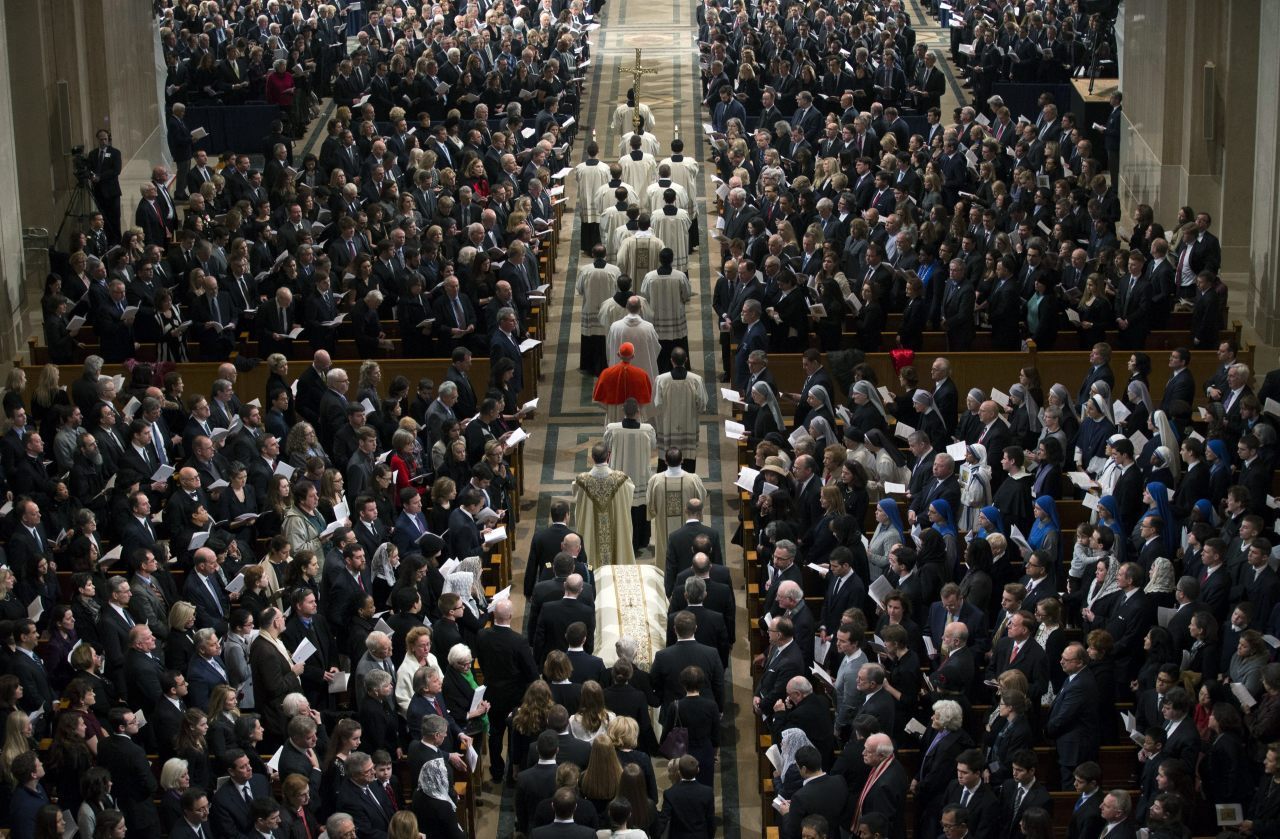 It was a remarkable moment for Catholics because it is not often that the entire Mass is shown to the entire country, and it could not have happened in a more dramatic setting. The Basilica Shrine of the Immaculate Conception is the largest Catholic worship space in the country, seating 10,000, with soaring ceilings covered with intricate mosaic tiles, including a massive Christ over the high altar that the students at nearby Catholic University of America call “angry Jesus.” The Shrine boasts 94 individual altars celebrating Mary, the mother of Jesus. 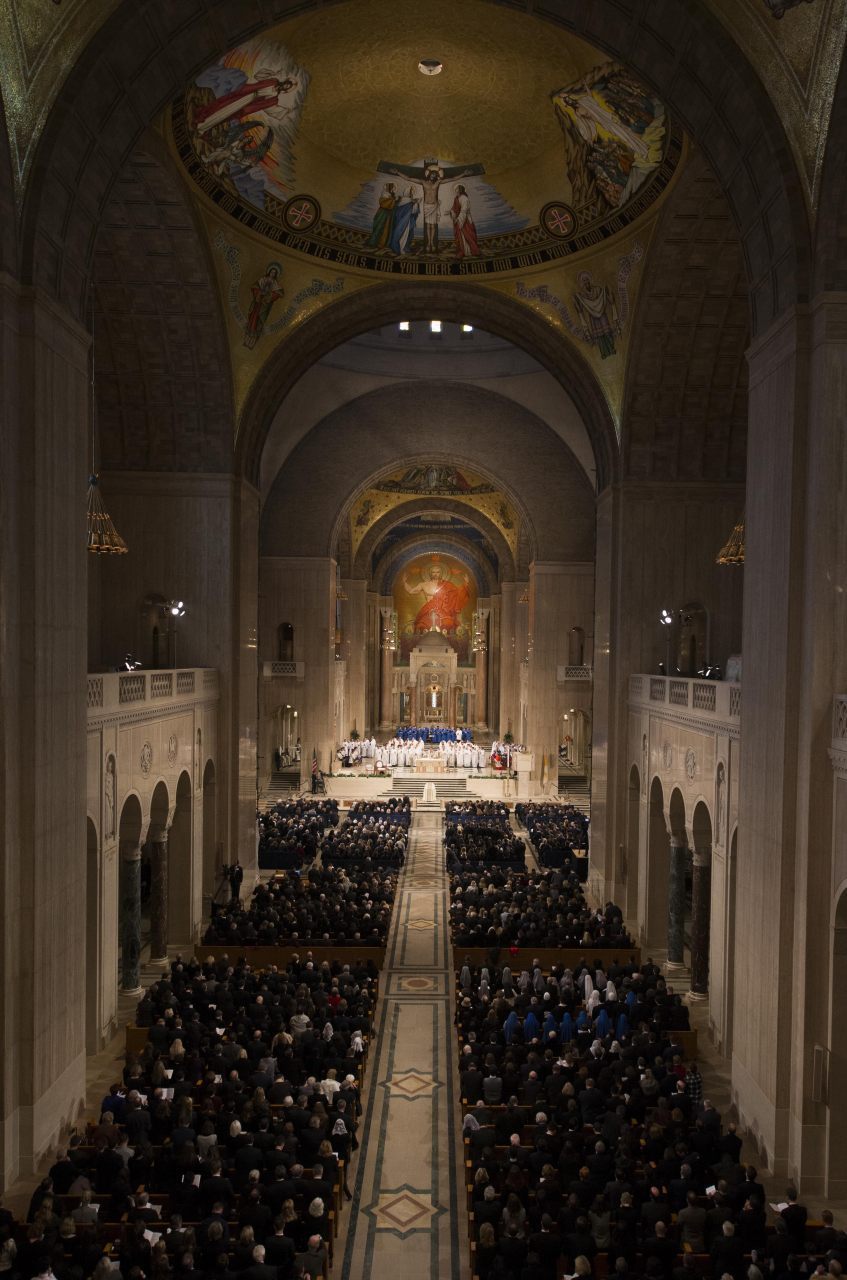 The readings of the Mass were done by Scalia’s close ally on the Court, Justice Clarence Thomas and by Leonard Leo, executive vice president of the Federalist Society, the influential lawyers group that Scalia helped to found and that has changed the legal discourse in the country and whose members sit on the Supreme Court and on courts around the country.

The high point of the two-hour Mass was the sermon preached by Scalia’s son Paul, who bears a striking resemblance to his father.

Occasionally emotional, particularly when talking about Scalia’s love for his family, the sermon was a moment where Scalia taught the country about what the Catholic Church believes. He interspersed eloquent teachings about the faith with homey and moving mentions of “Dad.”

Many know that Justice Scalia did not like funerals that turn into eulogies for the deceased, that he believed funerals should only be about Christ. So it was surprising when his son began:

We are here because of a man known known personally by many of us, known by reputation by many more, loved by many, scorned by others, a man of great controversy and great compassion. That man, of course, is Jesus of Nazareth. It is Him who we proclaim. It is because of Him, His life, death, and resurrection that we do not mourn as those who have no hope, but in confidence. So we commend Antonin Scalia to the will of God.

Scalia said his family was moved in recent days by the outpouring of love the family had received from around the country and were moved by the many who recounted “what Dad did for them.” He added, “Here, today, we recount what God did for Dad. How He blessed him.” 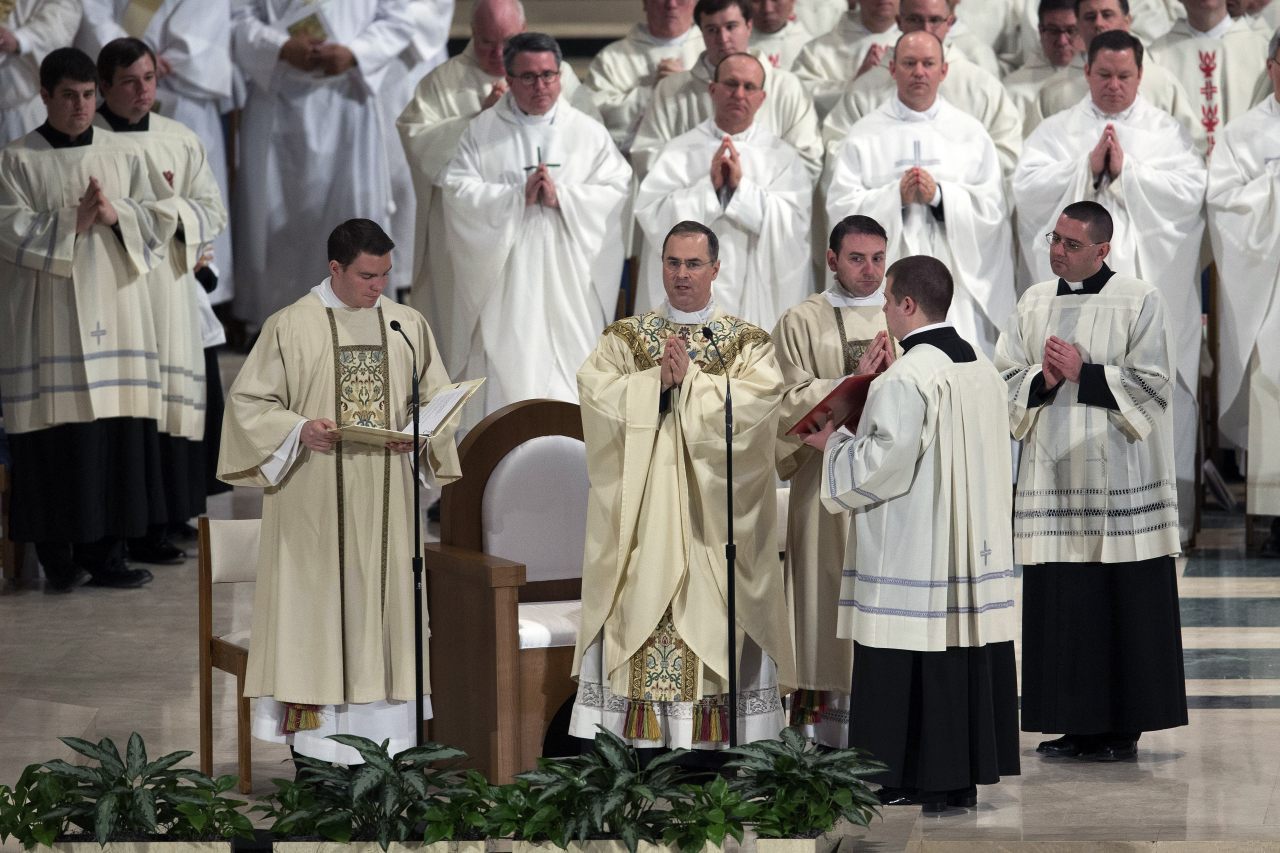 Scalia said, “We give thanks that Jesus brought him to new life in baptism, nourished him with Eucharist, and healed him in the confessional.”

Scalia’s voice broke, and his composure was briefly shaken, when he said, “Jesus blessed Dad with 55 years of marriage to a woman who could match him at every step and even hold him accountable.”

Scalia said his father scolded him one day for–of all things–hearing confessions at their local church one Saturday afternoon because Justice Scalia found himself in the line of his son. Scalia, the elder, quickly departed and later told Paul, “Heck if I’m confessing to you.” His son said, “The feeling was mutual.”

He was the father that God gave us for the great adventure of family life. Sure he forgot our names at times or mixed them up, but there are nine of us. He loved us and sought to show that love and sought to share the blessing of the faith that he treasured. He gave us one another, to have each other for support. That is the greatest wealth parents can bestow and right now, we are grateful for it.

Scalia not so vaguely mentioned political issues that have roiled the Court and the country in recent years:

God blessed Dad with a love for his country. He knew well what a close-run thing was the founding of our nation, and he, like the Founders, saw in that founding a blessing, one quickly lost when faith is banned from the public square or when we refuse to bring it there.

This was particularly pointed because present at the Mass were the Little Sisters of the Poor, who are under threat from the Obama administration and the Courts regarding providing abortion drugs in their health coverage. 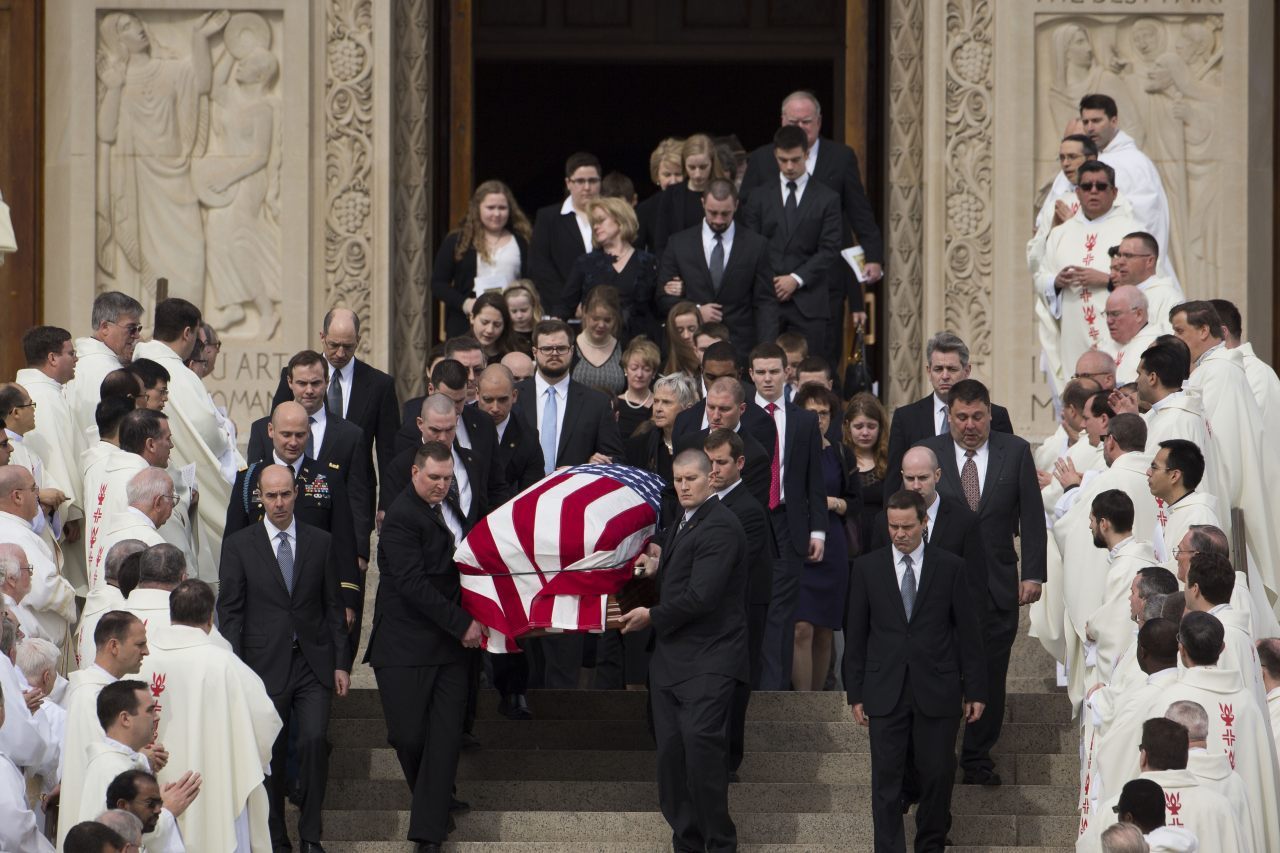 In this catechism for the country, Scalia wanted everyone to know a central teaching of the Catholic faith, that most people do not go straight to Heaven as Protestants believe, but that people must be purified before meeting their Maker.

As we mourn someone we love, we pray for him, we pray for the repose of his soul. We know that although Dad believed, he did so imperfectly, like the rest of us. He loved God and neighbor, but imperfectly, like to rest of us. He practiced his faith, but had not yet perfected it; Christ had not yet perfected it in him. We are here, then, to lend our prayers to that perfecting in freeing Dad from every encumbrance of sin.

Scalia asked that no one offer his father the “false love that would deprive him of our prayers. We will do good by praying for him, that his sins are washed away, and he is purified of all that is not Christ.”

Justice Scalia’s wife, Maureen, looking frail and stricken–her husband’s death was a surprise–followed the casket down the center aisle and on to his private family burial. The Basilica bell tolled slowly, and the congregation spontaneously began to sing the ancient Latin hymn to Mary, the “Salve Regina”:

Hail, our life, our sweetness and our hope.

To thee do we cry,

To thee do we send up our sighs,

Mourning and weeping in this valley of tears.

Turn then, most gracious advocate,

Thine eyes of mercy toward us;

And after this our exile,

Show unto us the blessed fruit of thy womb, Jesus.