The Federal Reserve is dealing financial drugs and endangering the world economy by creating a bond bubble of epic proportions.

Rather than sobering up with sound money and fiscal restraint, it instead has chosen the irresponsible and reckless route—so as to create a “wealth effect.” Their deliberate policy decisions have been the financial equivalent of supplying liquor and car keys to teenage boys, hoping that nothing bad will happen. At some point in the future, if this house of cards fails, will any of these masters of the universe be held accountable, or will it be business as usual–where the real criminals get promotions rather than jail time or permanent censure?

The Federal Reserve is often spoken about as if it possesses some divine intelligence. Reminiscent of the old EF Hutton commercials, the CNBC crowd behaves similarly, falling all over themselves to dissect every word for some hidden message or insight–when, in fact, there isn’t one. Most of the Fed’s statements can be best surmised by Shakespeare:

It is a tale. Told by an idiot, full of sound and fury,
Signifying nothing. –Macbeth Act 5, scene 5

The Fed is essentially a one-trick pony that attempts to solve every problem by juicing the system. Sold to the public as above the fold, and a group beyond reproach, they and their fellow Central bank accomplices around the world are creating a massive sovereign debt crisis that can never be unwound with sound money or honest accounting.

Did the Fed avert the real estate bubble or the Internet bubble? Did they learn the lesson of dangerous derivative exposures with the failure of Long Term Capital back in 1998? Do they have any idea what keeping interest rates so low, for so long, will do to foster malinvestment and undermine the solvency of pension and insurance firms around the globe?

Distracted by this year’s primaries, the real news is cast aside for more bread and circus antics as we teeter on the edge of financial ruin. Here is how former Fed official Richard Fisher describes what has really been going behind the scenes at the world’s most important central bank:

“[W]e injected cocaine and heroin into the system.”

“[N]ow we are maintaining it with ritalin.”

So there you have it. The U.S. economy is nothing but a drug-dependent junkie in need of constant doses of financial crack to keep the system afloat. Even after admitting that these policies have only INCREASED wealth inequality and undermined price discovery, the Fed is once again exposed as nothing but financial hustlers who, according to Richard Fisher, “front-loaded an enormous market rally in order to create a wealth effect.” And having “no ammunition left.”

The key takeaway is that the Fed created a massive stock and bond market bubble, but it didn’t really fix anything. The economy is great, right? Yeah, things are so good that today just 6 percent (28 companies) of the S&P 500 are making 50 percent of all profits, and over 50 percent of the working public (W-2 earnings) report annual incomes LESS than $30,000 a year. To put it bluntly, if you don’t own assets, you are being left behind.

At a time when record-low interest rate savings could be used to pay down principal on the $19.2 trillion in national debt, the government instead takes the low rates as license to continue spending with reckless abandon.

Below is a chart that depicts the fall in interest rates and the simultaneous rise in national debt relative to GDP. The U.S. is paying over $400 billion just in annual interest alone. If rates were to ever normalize, the budget deficit would explode. Much of Europe and Japan have taken interest rates negative to hide their respective failings. This global addiction will be harder to kick than heroin. 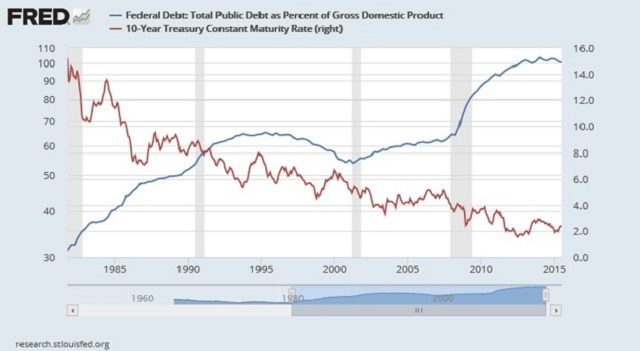 This excessive borrow and pretend policy been the secret of the Keynesian monetary experiment of the last 45 years–and its Achilles heel. In times of plenty, when a country should be putting money aside for a rainy day, governments always finds a reason to live beyond their means. Keynesian Theory runs counter to human nature and world history—non-petro nations never save money. This failure to control spending always leads to ruin, be it individuals or nations. The question is always in the timing, never in the math.

If you still doubt that our financial future is being manipulated like a mafia-run casino, watch any video with Richard Fisher and the CNBC crowd just laughing it up. Notice that the cohosts always fail to call him to task for not fixing the foundational failings of the system, and allowing the public to continue to mistakenly believe there is a true recovery going on.

It is only after these public servants leave office that we learn the truth as to the lies and misdirection that is fed to the general public on a daily basis to prevent the natives from getting restless. This is what former Federal Reserve Chairman Alan Greenspan says:

On the economy: “we’re in trouble basically because productivity is dead in the water.”

About being optimistic: “no, I haven’t been for quite a while.”

About how those regulations will protect us from another problem: “’Too Big to Fail’ is a critical issue back then, and now. And, there is nothing in Dodd-Frank which actually addresses this issue.”

In a nutshell, what did we learn? It’s simple, really. When you are in office you lie, misdirect, and blame the other party. Once you are out of office you can willingly admit the truth and promote said truth on TV, in self-authored books, and through high-priced consulting gigs. That level of truth-speaking just clears the conscience right up.

The rise in popularity of Bernie Sanders and Donald Trump is a clear sign that the public is waking up to the high-stakes games being played in the financial arena, and what losing ultimately costs them. There will be an ocean of tears to be shed by the masses if these problems are not addressed and dealt with appropriately. Gone are the days of kicking the can down the road. We are running out of road, not cans. If we don’t correct for the decades’ worth of mistakes and blatant irresponsibility, we all may all eventually end up living in our parents’ basements. The real fear, however, is that the next time something seriously goes wrong, what if the people of these United States pick up pitch forks in lieu of ballots?